When two Princeton engineering students set their minds to solving a tough technical problem for their senior thesis this year, the results were not theoretical. They were concrete – or at least applicable to concrete.

“The objective was to develop a sensor sheet to detect strains over large areas of structures,” said Matthew Gerber, a graduating senior majoring in civil and environmental engineering. He said the ultimate goal is to protect structures such as skyscrapers and dams by detecting “cracking, yielding, warping, anything significant beyond everyday normal use.” 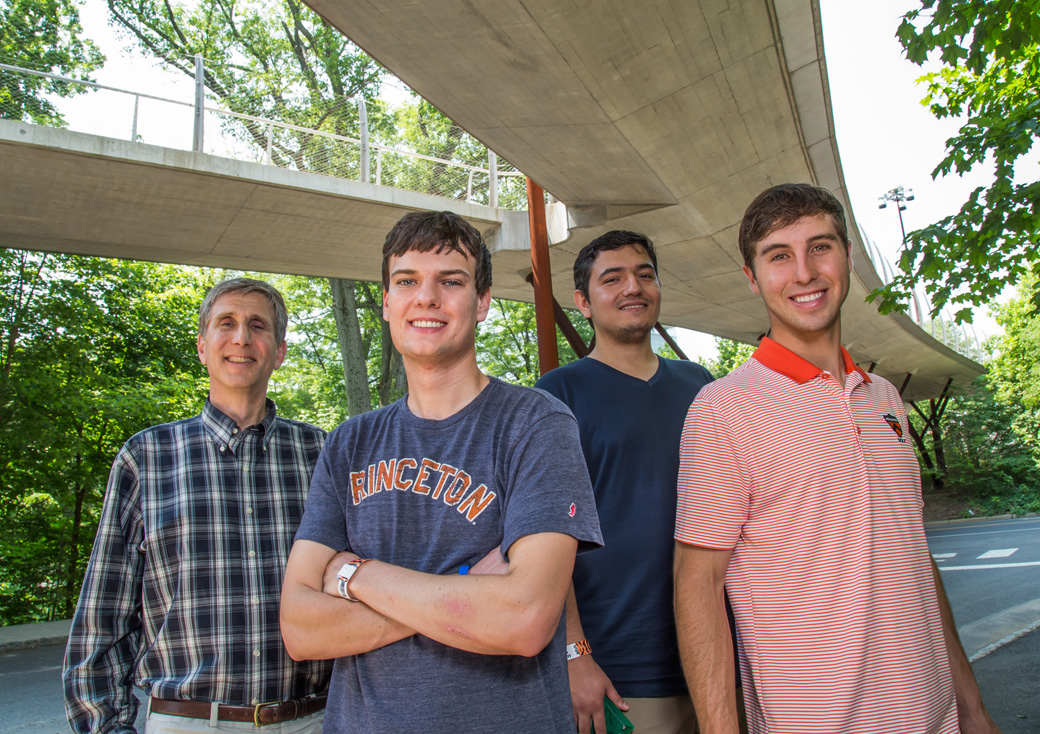 James Sturm, an electrical engineering professor who was one of the students’ thesis advisers, said this was no simple class project. Engineers have been pursuing a large-area sensor to monitor strain on surfaces of buildings, bridges and airplane wings for years.

“Conventional sensors for this purpose measure only a single point per sensor, or at most a line of locations with a fiber optic sensor,” said Sturm, the Stephen R. Forrest Professor of Electrical Engineering. “Both of these can miss cracks beginning to form in one location, so we sought a sheet of sensors to cover the surface. We did some fundamental work on an approach several years ago, but had had little progress translating the electrical engineering end of it into a practical way forward.”

Campbell Weaver, a graduating senior majoring in electrical engineering, had been looking for a thesis idea with a practical impact, so Sturm suggested he explore ways to tackle the wide-area sensor problem.

“It was a project that had started in the lab but it had some problems and had run out of steam,” Weaver said. “Previous generations of sensing sheets showed that the physics behind the idea worked, but they could not consistently read strain because of electrical and mechanical problems.”

The sensing sheets take advantage of the fact that the electrical resistance of metal wires changes as they stretch. So very thin wires arranged on polymer sheets will detect strains to an underlying surface as stretching wires trigger changes in resistance. Weaver believed that many of the problems could be solved by simplifying the electronics.

Another problem was how to affix the sensing sheets to structures. The adhesive is critical because the wrong type can either muffle emerging problems or fail to hold the sheets in place. To deal with that, the electrical engineers turned to colleagues in civil engineering. A team led by Branko Glisic, an associate professor of civil and environmental engineering, had been working on a similar effort. Glisic said the work could have impact far beyond Princeton because many U.S. bridges need monitoring and repair.

“We hope the sensing sheets will allow engineers to identify loss of performance at an early stage,” he said. “That will help set priorities in remedial action.”

Gerber, who was working with Glisic, began looking for a solution to the adhesive problem.

“We needed to find an adhesive that was strong so the sheet would not peel off, but it also had to be flexible” Gerber said. “If the glue is too rigid, it will transfer to much strain to the sheet and break the sensor.”

After many rounds of testing, Gerber decided on a special type of epoxy produced by the 3M corporation. At the same time, Weaver decided that the best way to address the electronics challenge was to split the old sensor in two. He kept the wire arrays on a flexible sheet of polymer that would be affixed to a structure, but split off the electronics used for analyzing the signals into a separate unit.

“I ended up with a rigid circuit board with multiplexing and amplification that communicated with the flexible sheet with the eight strain sensors,” he said. “Those two worked together to send information back to a data acquisition device.”

Because only the sensors would now be installed on the polymer sheet, it meant that only one type of metal had to be deposited and patterned on the polymer, which made manufacturing much easier. Splitting the more complex electronics into units that did not require a flexible mount also made supplying power more straightforward. (The low-powered sensors can use a solar cell or similar device, while electronics analyzing the signals can be powered from a computer’s USB port.)

Weaver and Gerber developed a system that they successfully deployed on the University’s Streicker Bridge. Aygun, who is continuing the research and did some of the early work along with a summer intern Juan Manuel, said recent results from the system have been very successful.

“What came out in the end is something we have sought for about four years,” Sturm said. “The work is of both fundamental and practical importance.”

By creating an innovative design that is both affordable and easily deployable, Gerber and Weaver have pointed the way toward a new method of monitoring the health of important parts of our infrastructure, he said.

“In the end, Campbell and Matt put it all together and innovated in multiple ways,” Sturm said. “What is remarkable compared to many other high quality theses I have seen, coming from a materials and hardware point of view, is that not only have they made something work to meet a real need on a fundamental level, but that it has such an immediate path to many ways forward.”