Five engineering faculty members were among ten Princeton University scientists who teamed up with local sculptors, architects and landscape architects to create the phenomenon known as Quark Park.

Located in downtown Princeton, the park features playful garden sculptures that evoke the serious research that the scientists do.

This time around, Soderman told the Princeton Weekly Bulletin, “science was the obvious choice because there are so many scientists in Princeton and most scientists are relative aliens to the lay public. People don’t understand what scientists do.”

Scroll down to see photos of their collaborations. 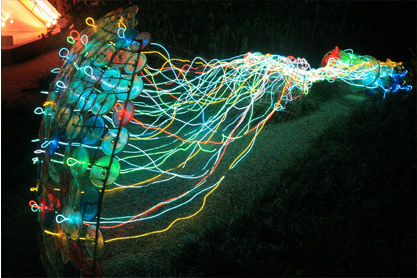 To create this sculpture, artist Nancy Cohen collaborated with Jim Sturm, professor of electrical engineering, and Shirley M. Tilghman, president of Princeton University and professor of molecular biology. The piece, seen here illuminated at night, is an abstract representation of the how mammals sense smell and remember scents. 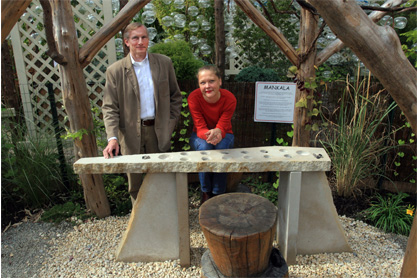 George Scherer, professor of civil and environmental engineering, collaborated with sculptor Kate Graves to create a stone table that incorporates a board for the African game of Mankala. Scherer has created a website and slide show explaining the materials science that drove the design of the sculpture, including a built-in experiment that may cause one leg to crumble, and providing a behind-the-scenes glimpse of how the stone table came into being. 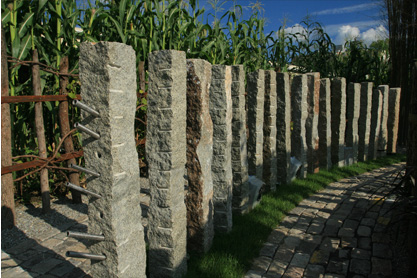 Perry Cook collaborated with sculptor Jonathan Shor to create a giant granite xylophone. When the xylophone is played (the metal bars at left serve as the hammers), a microphone picks up the vibrations and sends them to a box containing some simple digital signal processing equipment that adds delays and reverb to the xylophone sounds as they are being played.

Cook has composed a musical interpretation of Shor’s breaking of the granite as the xylophone sculpture was being created. 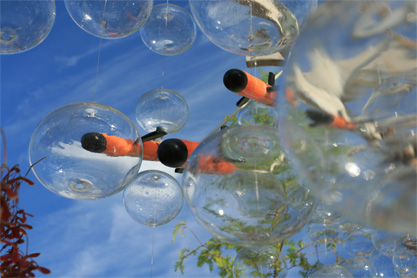 Naomi Ehrich Leonard collaborated with glass artist Bob Kuster to create “Motion in the Ocean” an installation that metaphorically represents Leonard’s work in feedback. Inspired by the movement of schools of fish, Leonard has developed a mathematical system that allows robotic gliders to self-choreograph their movements in response to their environment. 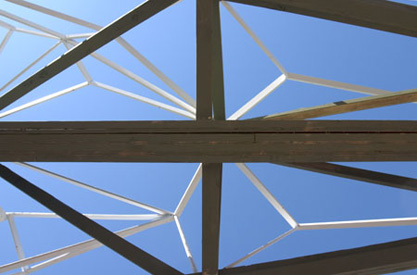 David Dobkin collaborated with architect Kevin Wilkes to design the outdoor theater and roof covering at Quark Park. The truss system and the shapes it contains were inspired by the use of triangles as the basic element in rendering complex shapes in computer graphics, which is Dobkin’s research specialty.

(All photos by Denise Applewhite, except Dobkin-Wilkes photo by Cie Stroud.)