It’s a traffic-weary commuter’s dream come true: A car that drives by itself.

Since 2004, a group of Princeton University students has been working on developing such self-driving, “autonomous” vehicles, competing in contests run by the Pentagon.

Now, the team is ready with this year’s entry. It’s a red Escape hybrid, donated by Ford Motor Co. and modified so that the brakes, throttle and steering systems can be controlled by remote.

The students, whose team goes by the weighty name of the Princeton Autonomous Vehicle Engineering group (PAVE), showed off their research Friday at the Carl A. Fields Center. 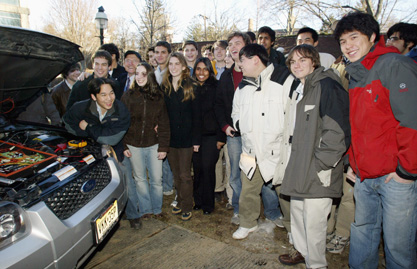 After developing software and systems to make the vehicle autonomous, they will enter it in the Urban Challenge, which will take place Nov. 3 at an undisclosed location in the western United States. The event is sponsored by the Pentagon’s Defense Advanced Research Projects Agency.

He sat in the Ford Escape on Friday while a student made the car drive around a grassy area using a wireless remote control.

The group entered the 2005 DARPA Grand Challenge with its first project “Prospect Eleven,” a silver pickup truck donated by General Motors that PAVE modified to drive itself. The vehicle succeeded in completing the semifinal round, but in the final round in the Mojave Desert the truck shut down after 9.6 miles due to a memory problem.

Team members weren’t satisfied, and felt they could do better, said Gordon Franken, a junior in the mechanical and aerospace engineering department. So they left the truck in the desert in the care of a dean at the University of Nevada, and six Princeton students returned a few weeks after the competition to try the 132-mile course again.

The students quickly figured out that just one line of code was causing the problem, and they fixed it within the first day. Prospect Eleven then drove the entire course mostly by itself, through obstacles like tunnels and gates.

PAVE members were excited to follow the vehicle through the course with a minivan, something they couldn’t do during the competition, and see the terrain of the course for themselves, Franken said. “It gave us a much greater perspective,” he said.

For the Pentagon, the competition is about breakthroughs for urban warriors.

The Urban Challenge will test autonomous vehicles in a simulated military supply mission on a 60-mile course, which the vehicles must complete in less than six hours. The vehicles will also have to follow traffic laws and avoid obstacles, driving with traffic in a mock urban setting. The top three finishers will receive $2 million, $1 million and $500,000 prizes, respectively. 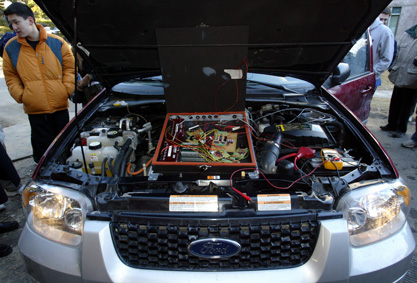 “DARPA’s strategy is to get innovation from places the military normally doesn’t contract,” said Brendan Collins, a junior in the computer science department.

In order to operate fully autonomously, a vehicle must perceive obstacles, process what it sees, and move according to physical activators.

To “see,” Prospect Eleven had a stereo camera containing two conventional cameras separated by a known distance. Each camera snaps a picture of an object at the same time, and software constructs a map from the information, using shades of gray to represent how near or far objects may be.

The software then takes this rough map and determines which regions represent obstacles. This information is sent to the tracking system, which keeps track of the car’s position relative to the object.

The PAVE team includes 33 undergraduate students, mostly from engineering departments, and eight faculty advisers, but the group is mainly student-led.

Freshman Lindsay Gorman plans to become a math major, but she’s also involved in developing software for the vision, navigation and control systems of the new vehicle. “It’s been a great learning experience,” she said.

Though it would be nice to win, and Kornhauser has high hopes, he said the main objective is to enrich the academic experience of the students. He also compared directing the students to “herding cats.”

“They’re all going out in different directions,” said Kornhauser. “They’re hardworking, intelligent, and creative. They just need some herding.”

Regional companies have recently contributed to PAVE’s self-driving vehicle, including ShockTech in Monsey, N.Y., and Posital of West Windsor. 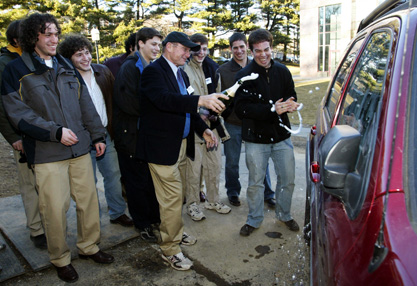 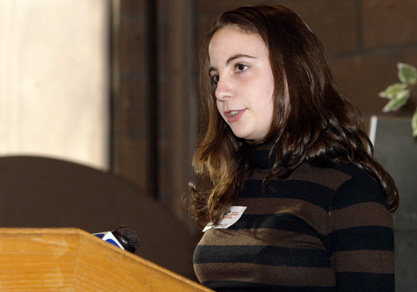