When Donna Liu established the Woodrow Wilson School’s University Channel — a downloadable feed of lectures by distinguished speakers — it became so popular that it quickly was using its maximum bandwidth.

So when she learned about a research project at Princeton called CoBlitz, which can handle the distribution of rich online content like video without overloading University servers, “it was a real life-saver.”

As a research project, CoBlitz has been powering not only the University Channel but also the Mozart Museum’s website, which allows users to download the composer’s orchestral arrangements, as well as Fedora Core Linux software releases.

Now CoBlitz is about to go commercial. Vivek Pai, one of CoBlitz’s founders, was one of a nearly a dozen entrepreneurially minded researchers who recently pitched their pioneering ideas at an innovation forum sponsored by Princeton’s Center for Innovation in Engineering Education. 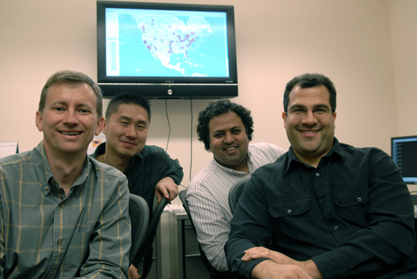 The CoBlitz team brings formidable expertise to the content-distribution table. Pai, an assistant professor of computer science at Princeton, was a co-founder of iMimic Networking, for which he helped design the fastest Web proxy server in the world. Larry Peterson, chair of Princeton’s computer science department, is the director of PlanetLab, a networked global testbed of computers, as well as chair of the planning group for GENI, a National Science Foundation-backed research initiative whose mission is to make the Internet more trustworthy. KyoungSoo Park just finished his dissertation at Princeton focusing largely on CoBlitz. And Marc Fiuczynski and Patrick Richardson are research computer scientists who work closely with Peterson on PlanetLab.

CoBlitz fills a different niche than Akamai, one of the giants in the world of content distribution which has as customers companies like Apple and IBM and which was co-founded by Princeton engineering graduate Tom Leighton.

According to Akamai’s financial statements, customers pay between $12,000 and $24,000 a month to Akamai for server capacity. CoBlitz is designed for customers who need to accommodate hard-to-predict bandwidth spikes but don’t want, or can’t afford, to pay for a huge amount of bandwidth.

Like BitTorrent, a popular peer-to-peer file sharing program, CoBlitz works by splitting files into pieces and sharing them across a network of machines. But CoBlitz is different in that its logic is implemented on the network itself, meaning that CoBlitz can operate seamlessly with a Web server or browser without requiring any special software modifications or installations.

Because of this, Pai said, CoBlitz is incredibly easy to use. “It’s a five-minute, do-it-yourself operation,” he said.

Pai contends that CoBlitz is poised to capture a large, as-yet untapped market just as the appetite for online video is ballooning. Liu suspects that he may well be right.

“There is an explosion of online video and a lot of institutions don’t recognize what it is going to do to their bandwidth,” said Liu. “They are going to need solutions like CoBlitz.”