Sara Piaskowy, a senior majoring in civil and environmental engineering, recently solved a mystery: Why does Bayview Avenue, one of the main roads in Seaside Park, N.J., flood regularly despite working storm sewers and a two-foot barrier wall separating it from the waters of nearby Barnegat Bay.

Under certain conditions, Piaskowy discovered, the storm sewers work in reverse — transporting water from the bay under the flood barrier and onto the road. She was advised on the project by Yin Lu “Julie” Young, an assistant professor of civil and environmental engineering.

Piaskowy was one of more than 60 undergraduates who participated in the May 10 Undergraduate Research Symposium, which provided an opportunity for students to present their research to a panel of 30 judges as well as members of the public. Award winners were selected by the judges in three categories — engineering, the biological sciences and the non-biological sciences — and over 100 audience members cast their ballots for the People’s Choice Award. Based on her work, Piaskowy was awarded first place in the engineering category and Grand Prize Overall. 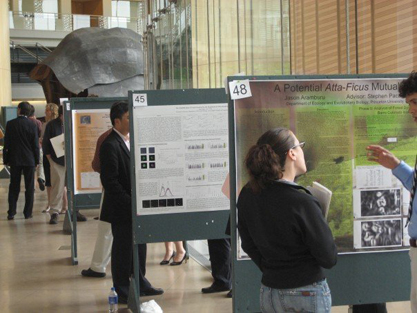 “The level of undergraduate research that goes on at Princeton is phenomenal but we know so little of what our fellow students are doing,” said senior computer science major Tianhui (Michael) Li, who co-chaired the event with classmate and fellow computer science major Lester Mackey. “The symposium provides a forum for students to learn about each other’s independent work. It is also a way of recognizing outstanding research as well as the ability to effectively communicate it.”

Sponsored by multiple campus entities — including the School of Engineering and Applied Science, the Mid-Infrared Technologies for Health and the Environment Center and the Council on Science and Technology — the symposium featured a keynote address on morality by Jonathan Haidt, an associate professor of psychology at the University of Virginia who is visiting Princeton’s Department of Psychology and Center for Human Values. Four faculty members, including Lewis-Sigler Institute for Integrative Genomics Director David Botstein and Dean of Engineering H. Vincent Poor, served as advisers to a five-person student steering committee that organized the event.

“The symposium plays a very important role in showcasing the enthusiasm and drive of the participants and the novelty of their projects,” said Moses Charikar, an assistant professor of computer science who served as a judge. “Being able to convey excitement about your work to outsiders to your field is a challenge and our undergraduates rose admirably to it.”

David Weiss, a senior majoring in computer science, was awarded second place in the engineering category and second place overall for his independent work, which was advised by David Blei, an assistant professor of computer science, and Ken Norman, an assistant professor of psychology. At the symposium, Weiss presented his work to improve techniques for analyzing data gathered by functional magnetic resonance imaging (fMRI) scanners — non-invasive devices that detect patterns of brain activity.

“I thought the symposium was a really nice opportunity to present my research to many people, including my friends and professors,” said Weiss, who will continue to work on the project next year as research assistant. “I was also very impressed with the quality of other people’s research.”