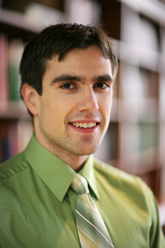 Landis Stankievech, a senior majoring in mechanical and aerospace engineering, was among three Princeton students to win a Rhodes Scholarship this year.

One of the highest distinctions awarded to undergraduate students worldwide, the Rhodes is given for academic achievement, integrity of character, a spirit of unselfishness, respect for others, potential for leadership and physical vigor. The scholarship provides for two or three years of graduate study at The University of Oxford.

Stankievech, a native of Canada, wants to study philosophy, politics and economics at Oxford, after which he hopes to work on environmental issues.

“As an engineer I know how to approach technical and logistical problems,” he said. “However, making changes to help our climate is going to take more than engineering solutions. It will take an understanding of economic and political situations and of the ethical arguments that go into making those changes.”

Among other honors, Stankievech was awarded the Shapiro Prize for Academic Excellence in 2005 and 2006 and the Manfred Pyka Memorial Physics Prize in 2005.

Michael Littman, a professor of mechanical and aerospace engineering, described Stankievech as having “an extreme thirst for knowledge and a real knack for engineering analysis. He is a natural and effective leader, and a supportive helper of his peers.”

“He has a passion to truly understand what he’s studying,” said Jeremy Kasdin, an associate professor of mechanical and aerospace engineering. “With the questions he asked me in class and during office hours, I could see he was wrestling with problems, really wanting to understand what was behind them. He works incredibly hard and is very respected by his peers.”

Stankievech also has excelled as a member of the Princeton men’s ice hockey team. His coach, Guy Gadowsky, said his teammates “have benefited from witnessing his great work ethic and his commitment to being the absolute best he can be in all areas of his life. On the ice Landis is a tireless worker who gets rewarded for his committed team play with big goals in big games.”

As an athlete, Stankievech has been involved in several youth programs, including teaching youngsters to skate in the Special Olympics Skating Program and coaching in the Princeton Youth Hockey program.

Excerpted from the Princeton home page