Entrepreneurial thinking is not just for start-up companies and can be applied to all situations, business school professor Julian Lange told a Princeton audience Oct. 4 as he kicked off a five-workshop series on “Harnessing the Power of Entrepreneurship.”

Entrepreneurship is about creating new ideas, putting them into action and creating value for the stakeholders, he said. While value is often equated with money, Lange encouraged audience members to broaden their definition of the term. 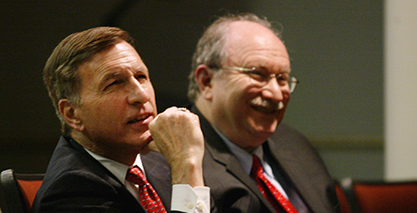 “Nothing is wrong with creating companies that produce useful goods for society, but there are many other organizations that entrepreneurship and entrepreneurial ways of thinking can benefit,” he said. These include governments, large corporations and nonprofit organizations.

Whatever the endeavor, successful entrepreneurs pursue their passions relentlessly, take action and have fun, Lange said. But, they aren’t perfect.

“If you’re not making mistakes, you’re not trying hard enough, not taking enough chances,” he said, offering a quote from hockey legend Wayne Gretzky: “You miss 100 percent of the shots you don’t take.”

Lange, a professor of entrepreneurship and public policy at Babson College, currently is serving as the inaugural Dean’s Visiting Professor in Entrepreneurship in Princeton’s Center for Innovation in Engineering Education, which is sponsoring the workshops. Lange earned a bachelor’s degree in economics from Princeton in 1965 as well as an M.B.A. and Ph.D. from Harvard University. He is the founder and president of the Chatham Associates management consulting firm. Previously, he served as president and chief executive officer of Software Arts Inc., which created VisiCalc, the first electronic spreadsheet. 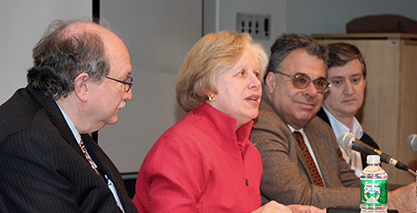 Each event in the series included guest speakers who have used the entrepreneurial process to effect major changes in areas not traditionally associated with entrepreneurial thinking.

The inaugural workshop featured Craig Benson, former governor of New Hampshire and co-founder of Cabletron Systems, one of the first major providers of computer networking equipment.

Other speakers included: Peter Kellner, a 1991 Princeton graduate and co-founder of Endeavor, an organization that supports entrepreneurs in developing countries; Francis Pandolfi ’65, consultant to non-governmental and non-profit organizations and former chief operating officer of the U.S. Forest Service; and Walter Skowronski, president of Boeing Capital Corp. and senior vice president of Boeing Co. On Nov. 8, a panel of Princeton luminaries discussed entrepreneurship in higher education: Edward Felten, director of the Center for Information Technology Policy; David Botstein, director of the Lewis-Sigler Institute for Integrative Genomics; and Nancy Malkiel, dean of the college.

Videos of the talks are available at http://commons.princeton.edu/ciee/.