The Princeton Autonomous Vehicle Engineering (PAVE) team won “rookie of the year,” third place overall out of 47 teams and first place in the design challenge portion of the 16th Annual Intelligent Ground Vehicle Competition, held May 30 to June 2 at Oakland University in Rochester, Mich.

The competition required student teams to design and create small, unmanned outdoor vehicles capable of negotiating obstacles and navigating with the use of GPS. Teams also were judged on their robot’s ability to understand and respond to a standardized messaging system called Joint Architecture for Unmanned Systems. A number of organizations, including the U.S. Army and the Association for Unmanned Vehicle Systems International, sponsored the competition. 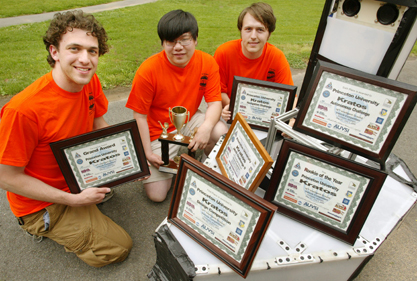 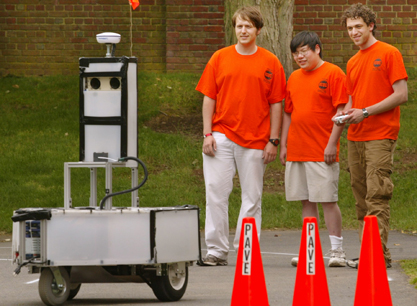 PAVE’s winning entry, Kratos, was named after a son of Zeus in Greek mythology. Featuring two cameras as “eyes” and a GPS navigational system, Kratos is able to “see” objects surrounding it and determine its position relative to those obstacles. Kratos can then choose the best path to follow in order to avoid collision or stay within defined lane boundaries.

Kratos won fourth place in the navigation portion of the IGVC, reaching seven GPS waypoints in a field filled with obstacles in just over three and a half minutes. The robot placed sixth in the lane-following and obstacle avoidance segment, traveling 223 feet on a course that at times required the robot to navigate around a center island in the path and even double back on itself. Videos from all three days of the competition are available on the PAVE website.

“Technically, the hardest part of the IGVC for us was taking the technology from the Urban Challenge and changing the decision-making logic to help the robot see objects,” said Andrew Saxe ’08, who received regular text message updates from his teammates at the competition since his graduation from Princeton conflicted with the IGVC. Even after overcoming technical obstacles, the students had quite a long journey ahead of them — the 640 mile drive they made from Princeton to Michigan in a rental van large enough to accommodate Kratos.

The nine members of the team are “an extremely talented and motivated group of undergraduates,” said computer science professor Robert Schapire. “I am officially their advisor, but I can assure you that the project was entirely theirs from start to finish.”

The opportunity to take ownership of the robot design and creation was one of the most valuable aspects of the experience, Saxe said. “It teaches you to do all the ‘under the hood’ things. It is very different to learn about something in class and to implement it on a robot that has to work.”

“This competition highlights the difference between academic and professional knowledge, between the classroom and the real world,” Franken said. “We get to have the opportunity to develop real-world knowledge at the undergraduate level, as opposed to waiting for graduate school or getting into industry.”

PAVE, the University’s only student-run research team with its own laboratory space, will be seeking new members in the fall and hopes to enter next year’s IGVC.