An experimental series of courses that integrates math, physics and hands-on engineering into a unified alternative freshman track has now become an established part of the curriculum.

Freshman year is a critical time for engineers — they gain the fundamental mathematical and physical foundations for their later studies, while making crucial decisions about the field in which they would like to concentrate. Yet the conventional freshman curriculum gives engineers only a glimpse of the exciting work that this foundation enables. The primary goal of the integrated course is to give freshmen a sense of the excitement of modern engineering and of the foundational roles that mathematics and physics play in solving real problems. 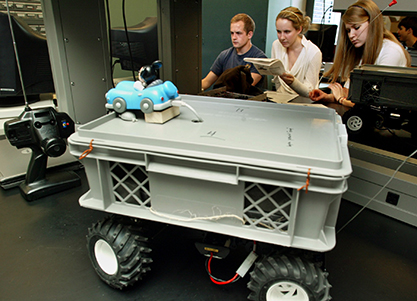 Started in 2005, Engineering-Math-Physics (EMP) is a flagship course of the Keller Center for Innovation in Engineering Education.

The four courses that make up the EMP series are taught by 10 faculty members from eight departments, who work as a team to introduce calculus and physics in the form of motivational examples and laboratory experiences that are relevant to all branches of engineering. This integrated approach reflects the nature of much engineering practice and research today, which involves solving problems that cut across conventional disciplines. 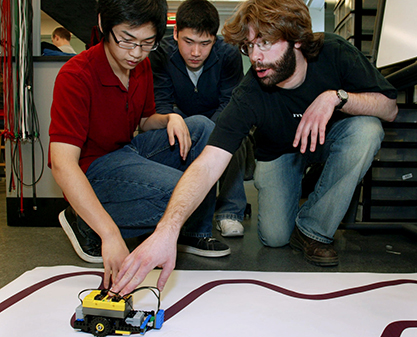 The labs in the first semester revolve around a single project to build, launch, and analyze the flight dynamics of water-propelled rockets. Students build their own circuit boards with micromechanical accelerometers and end by analyzing interactions of gravity, thrust, momentum, and drag. In the second semester, students work on three design projects, each based on a major theme: energy sources and the environment, robotic remote sensing, and wireless multimedia communication. The sessions also include guest lectures that introduce societal, technical, and scientific issues related to the three major themes.