Craig Mundie, the chief research and strategy officer of Microsoft, visited Princeton yesterday to discuss the future of computers with engineering students and faculty and to demonstrate new technologies the software giant is developing.

In meetings throughout the day, Mundie asked researchers at Princeton’s engineering school how computers play a role in their work and offered a glimpse of how he thinks computing will change in coming years.

During an afternoon talk, he demonstrated several new technologies Microsoft is working on, including a table-like computer dubbed the Surface Computer and Microsoft WorldWide Telescope, a 3-D mapping program similar to Google Earth that allows virtual exploration of outer space. 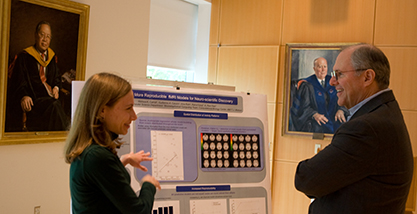 “We clearly have the opportunity to apply [new technologies] and innovate with them,” Mundie said during his presentation. “The question is how will it all come together.”

In addition to Princeton, Mundie plans to visit four other campuses this week: New York University, the University of Michigan, University of California-Berkeley, and UC San Diego. Bill Gates made a similar tour before he stepped down in June 2006 and handed the task of guiding Microsoft’s innovations strategy to Mundie and Ray Ozzie, the company’s chief software architect.

Mundie, whose job description includes planning company’s strategy in the long term (from 3 to 20 years into the future), said the tour gives him a chance find out what students and educators need from computing in their research and to let them know about Microsoft’s future plans.

After meeting with faculty members in the early morning, Mundie met with several students and a postdoctoral researcher from the engineering school to talk about the role computing plays in their work. The students presented posters explaining their scientific research, then sat down with Mundie for an informal discussion.

During the poster session, Harlan Yu, a doctoral student in computer science, presented his thesis project which focuses on tracking the spread of harmful computer software known as “malware.” Using techniques akin to those employed by epidemiologists to trace the spread of diseases, Yu hopes create a method of mapping the sources and movement of malware.

“We want to track how the malware spreads over time across geographic locations,” he told Mundie. “Then we can look for key factors that stop its spread or the factors that help it spread.”

Mark E. Dobossy, a postdoctoral researcher in civil and environmental engineering, explained his work on carbon sequestration, a method of injecting excess carbon dioxide into the Earth’s crust to slow the pace of global warming.

Using computer models based on geological research, Dobossy has estimated the risk of the carbon dioxide gas escaping from underground reservoirs based on the type of rock under which it’s injected.

During the discussion, Mundie said he believes more computer development needs to focus on helping scientists and engineers solve problems that require crunching enormous amounts of data. Despite advances in processing speed and the development of large networks of super computers, he said, many fields of research are going to require new programming methods and mathematical techniques to answer pressing problems.

He noted that advances in quantum computing – which he discussed with engineering faculty at the earlier meeting – in combination with the development of large banks of supercomputers, could soon lead to a revolution in computing power that will quickly outdate current programming methods.

One particular problem, he said, is developing new computing devices – smart phones, tablet computers, and other devices still to be invented – that can take advantage of “cloud computing,” a term for software, data, memory and processing power housed on supercomputers that can be accessed through the Internet.

Consumer-focused examples of this sort of computing are becoming commonplace with the spread of broadband internet access and include Internet search engines, photo sharing and editing programs such as Flickr and Picasa, and social networking sites such as MySpace and Facebook.

Such networks can also provide raw computing power for use in science, and as access to supercomputers grows, scientists are using them to crunch larger and larger datasets. During the discussion the Princeton group told Mundie that they find it difficult to write programs that will run on a traditional desktop computer and also run on supercomputers. Mundie and the group also discussed privacy and security issues raises by storing data on remote networks.

In the afternoon Mundie spoke in Dodds Auditorium in Robertson Hall, and presented prototypes of technologies that he said might one day be used in education.

He demonstrated an anatomy program that combines multiple levels of information on the human body and allows users to navigate through various tissues – skin, muscle, nerves – with a touch screen.

By mashing up various data sources, he said, the program allows users a single access point to a wide range of information. Such programs could also be combined with social networking functions that allow users to collaborate to find and generate knowledge.

“This is a model of what education will be like in the future,” he said, noting that such technologies would at first only be available in wealthy nations. However, he added that similar technologies might be leveraged to help people in developing countries access important information — for instance, by putting important medical information in the hands of health care workers.

He said the Surface Computer he demonstrated could also serve as an educational tool and allow people to share information more easily. It looked like small table covered with a piece of glass, a bit reminiscent of early tabletop video games. However, the clear surface served as the computer’s touch screen, and was able to connect with other tablet computers laid on top of it.

Mundie said the system would allow several people to bring their own mobile computers together at the Surface Computer and drag files such as documents and photos onto the central screen where they could be discussed and shared. “In the future we will likely see that desks themselves will have surface computers built into them,” he said, “and on the wall, the chalk boards and black boards, those too will become active surfaces.”