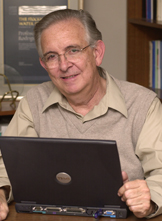 Ignacio Rodriguez-Iturbe, an environmental engineer and pioneer in the field of ecohydrology, has been elected to membership in the National Academy of Sciences, one of the highest honors in all areas of science.

Rodriquez-Iturbe, the James S. McDonnell Distinguished University Professor of Civil and Environmental Engineering, is a leading figure in the field of ecohydrology, which combines hydrology and ecology to understand how the flow of water through the landscape interacts with living organisms and ecosystems. In a paper published in Nature in 2008, Rodriguez-Iturbe and colleagues developed a simple model for predicting the biodiversity of fish in river networks.

He has been widely recognized for his contributions, including the Stockholm Water Prize in 2002 and the Bowie Medal and Edward O. Wilson Biodiversity Technology Pioneer Award in 2009.

Rodriguez-Iturbe was among 72 new members and 18 foreign associates elected April 27 at the academy’s 147th annual meeting. He will be inducted into the academy next April during next year’s meeting in Washington, D.C.

This election brings to 74 the number of Princeton University faculty members who are members of the National Academy of Sciences.

Watch a video of Ignacio Rodriguez-Iturbe discussing a model for predicting the biodiversity of fish based on simple information about rainfall and rivers.