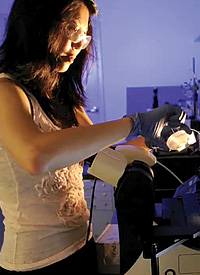 Researchers in the lab of Howard Stone, the Donald R. Dixon ’69 and Elizabeth W. Dixon Professor of Mechanical and Aerospace Engineering, are applying a deep understanding of fluid flows to reveal the mechanics behind critical biological functions.

In one project, Stone’s group found the unexpected formation of bacterial ribbons in the middle of flowing fluids, which has implications for understanding serious infections and has led to a collaboration with Bonnie Bassler, the Squibb Professor of Molecular Biology, and Ned Wingreen, a professor of molecular biology and associate director of the Lewis-Sigler Institute for Integrative Genomics.

The field of biology is awash in data about human genes, but as Olga Troyanskaya points out, databases often represent a “human-in-a-blender” – an undifferentiated average of genetic activity throughout the body.

Troyanskaya, an associate professor of computer science who is jointly appointed at Princeton’s Lewis- Sigler Institute for Integrative Genomics, is developing computational methods to determine exactly what genes are turned on or off in specific tissues – whether the kidneys or the lungs – without doing any further laboratory experiments.

“It is very accurate – more accurate than experimental approaches in mice,” Troyanskaya said.

The next step in her work is to develop a similar method for elucidating the pathway of signals from one gene product to another, bypassing the need for timeconsuming experiments and offering clues to disease processes and therapies.

Information technology is transforming biomedical research by creating formalized networking platforms through which researchers share knowledge. Benedicte Callan, a University of Texas health-policy expert currently a visiting fellow at Princeton’s Center for Information Technology Policy, is studying these networks and how might they affect government policy toward funding, openness and commercialization of biomedical research. 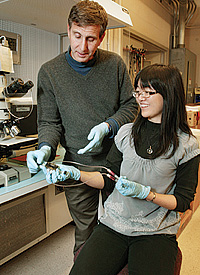 James Sturm, the William and Edna Macaleer Professor of Engineering and Applied Science, and director of the Princeton Institute for the Science and Technology of Materials, is working with physics professor Robert Austin, of the Princeton Physical Sciences Oncology Center, on an interdisciplinary approach to understanding the evolution of cancer.

In one project, Sturm and colleagues created an array of tiny posts that hold cancer cells and allow precise control over their microenvironment. The researchers use the device to wash cancer drugs over the cells and watch how the cells develop resistance to the drugs.

Researchers in the lab of Professor of Electrical Engineering Sigurd Wagner are using their expertise in flexible electronics to give medical researchers an unprecedented view of brain damage. 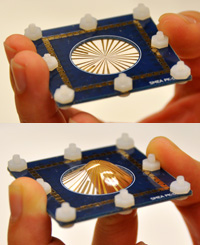 Doctors would like to model brain damage in the lab by rapidly stretching nerve cells, but the electronics needed to monitor the effects typically are mounted on glass, which does not stretch. Wagner’s group, including graduate student Wenzhe Cao, has developed a flexible electronic array and is testing it with biomedical engineers at Columbia University.

Brain tissue cultures grown on this flexible material can be stretched to model traumatic injury, and the tissue’s electrophysiology can be monitored before, during and after stretching.