After impressing a panel of judges with a three-minute pitch about paper-thin sensors that could revolutionize the safety of large structures, Princeton engineer Branko Glisic won the top prize at this year’s Innovation Forum, a competition that showcases University research with potential to succeed in the marketplace. 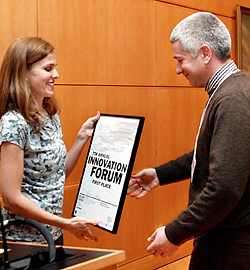 Glisic, an assistant professor of civil and environmental engineering, told the event’s six judges that his nanotechnology sensing sheets may one day provide high-resolution monitoring of large structures to reveal problems before disaster strikes. The sheets could be applied “like wallpaper” to everything from bridges to oil pipelines, Glisic said. The aim is to detect and locate early indicators of structural damage like concrete cracks and steel buckles that may eventually lead to serious malfunction and even collapse.

“When the Minneapolis river bridge collapsed [in 2007] I wondered what technology could have detected the early damage and possibly prevented the disaster,” said Glisic, whose research team includes electrical engineering professors Naveen Verma, James Sturm and Sigurd Wagner. “There was no answer to that question. You could attach a lot of small sensors, but with the technology currently being used there will always be spots on the structure that are missed.”

Glisic, who was awarded $25,000 in funding, was one of eight teams that pitched the commercial potential of research ranging from advances in cancer treatment to innovations in MRI, a medical imaging technology. The seventh annual event, sponsored by Princeton’s Keller Center, took place Feb. 29 in the Friend Center Auditorium.

During the event, a member of each team delivered a three-minute pitch to a panel of judges comprising investors, scientists and technology company executives. After each presentation the judges, who were allotted five minutes to ask questions, grilled the presenters on details such as the projected cost of production and challenges in bringing the innovations to market. 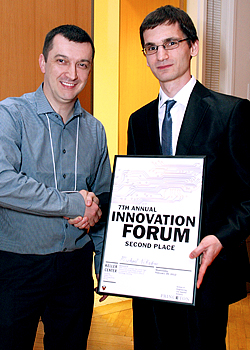 Chirped Laser Dispersion Spectroscopy, or CLaDS, a method for increased speed and sensitivity in detection of potentially harmful industrial gas emissions and atmospheric greenhouse gases, won the $10,000 second prize. Michal Nikodem, a postdoctoral researcher in electrical engineering, presented for the CLaDS team, which was led by Gerard Wysocki, an assistant professor of electrical engineering. Unlike common sensing techniques that detect gasses by measuring how much they absorb various frequencies of light, CLaDS detects changes in phase of the laser light interacting with trace chemicals at the molecular level, said Wysocki. This new technology, which improves performance without adding costs, has been already tested in the field. 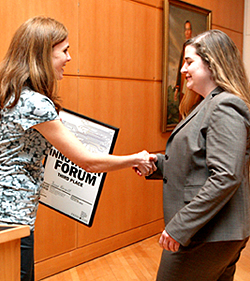 Taking home the third-place prize of $5,000 was a potentially revolutionary breakthrough in designing better antiviral drugs to prevent complications from cancer treatment, HIV infection and other medical conditions. During her pitch, Danna Hargett, a postdoctoral research associate and lecturer of molecular biology, extoled the virtues of a “high-throughput monocyte suspension system” she developed at Princeton. The system mimics the cellular environment in which viruses such as cytomegalovirus-a common and devastating side effect of cancer treatment-arises. Hargett’s team included molecular biology researchers and professors from the University of Nevada Reno.

In addition to the Keller Center, the event was sponsored by the Jumpstart Angel Network and the law firm Drinker, Biddle and Reath in conjunction with Princeton’s Office of Technology Licensing.

“This forum is really important in fostering the overall entrepreneurial climate here at Princeton,” said Cornelia Huellstrunk, the Keller Center’s associate director for external affairs. “It sheds light on technology-centered development and research that is not only groundbreaking but also has market potential..”

In the months leading up to the forum, competing teams provided a written draft and recorded video of their pitches, which allowed the judges to provide valuable feedback to the presenters. The presenters also partook in numerous coaching sessions to perfect their presentations.

John Keith, a research scholar in mechanical and aerospace engineering, said this feedback was invaluable. Keith was part of a team led by Emily Carter, the Gerhard R. Andlinger Professor in Energy and the Environment and Professor of Mechanical and Aerospace Engineering and Applied and Computational Mathematics. Peilin Liao, a graduate student in the chemistry department, pitched the concept, which involved quantum mechanics calculations to find how to make iron oxide (common in rusted steel) better at producing hydrogen and oxygen from water.

“We’re theorists,” said Keith. “Without the Keller Center this would have just been a couple scientists walking up to the podium and saying, ‘Look at these equations.’ That kind of presentation won’t move ideas into the market.”

Likewise, Liao said she was grateful for her interactions with the industry leaders and investors who helped shape her presentation. 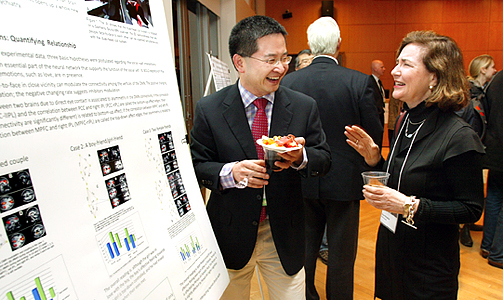 “This is the first time I’ve participated in a forum like this and it was a great chance to learn what people in the business world are looking for in marketable ideas,” said Liao.

Kef Kasdin, one the event judges and a founding partner of Battelle Ventures, a New Jersey-based investing firm that focuses on early-stage technology companies, said the forum is particularly important in the way it forces academically-minded innovators to begin thinking about the entrepreneurial possibilities of their work.

“It’s a different set of questions and a whole different mindset than what professors and students typically spend their days thinking about,” said Kasdin, who earned her undergraduate degree in civil engineering at Princeton in 1985. “How do you get this to the market? How much money is it going to take? How long will it take? It’s important to consider those questions even in an academic environment because many innovations can come out of Princeton, but you have to think about how you will get those innovations to the market.”

This was certainly the case for Glisic, who joined Princeton’s faculty in 2009 after spending eight years working for a company that specializes in fiber optic sensors used to monitor infrastructures.

“It’s a really exceptional opportunity and a very difficult exercise,” said Glisic. “The fact that you have to present in three minutes and fit into those three minutes everything that is important about your innovation, it really gave me and my team a better sense of how to one day bring this to market.”

Glisic said his team will use the prize money to scale up its current millimeter prototype to a meter prototype. With the help of future grant funding, Glisic said he expects his sensing sheets could be ready for real-world field studies on large structures in as little as two years.

“Every presentation tonight was equally good,” said Glisic. “It’s amazing to see what’s possible and what will eventually become a part of our future.”

For more details on the 2012 presentations, see the Innovation Forum website.