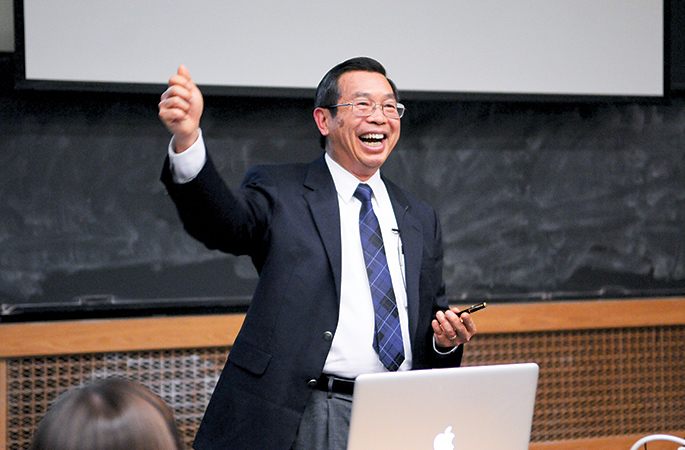 There is pressure, and there is pressure. Paul Hsieh (BSE ’77) mostly deals with the physical type, the stresses and forces of underground water and rock. Understanding that type of pressure is a daily task for Hsieh, a hydrologist at the U.S. Geological Survey (USGS) in Menlo Park, Calif.

But after the Deepwater Horizon oil rig exploded in April 2010, Hsieh learned about pressure of an entirely different kind. Engineers worked for 87 days to cap the stricken well and staunch the oil flowing into the Gulf of Mexico. But no one was sure whether the plan would work, or create an even greater disaster.

For the answer, the federal government turned to Hsieh.

“The well was lined by pipes called casing, and the fear was that the explosion had damaged the well so that the oil could leak out of the casing,” he said.

The escape of oil, called an underground blowout, could have led to multiple ruptures on the seabed and place the disaster beyond control. A working group of scientists, reporting to Secretary of Energy Steven Chu, decided to use the well’s pressure to determine whether the blowout was likely.

As a researcher with the USGS, Hsieh helps develop computer models to predict the flow of underground water and potential contaminants. Part of the modeling deals with estimating the interaction between water and rock structures deep underground – a feature uniquely suited to the Deepwater Horizon recovery.

Hsieh said he has been fascinated with the subject since he spent a summer as an undergraduate studying the aquifer on Eastern Long Island under George Pinder, a professor of civil engineering, at Princeton.

“I spent a summer on the South Fork on a project looking into potential salt water intrusion into the water resources, and I loved the work,” he said.

Hsieh started work at USGS after graduating with his bachelor’s degree in civil engineering. Except time spent earning his doctorate from the University of Arizona, he has been there ever since.

Rear Adm. Kevin Cook, director of prevention policy at the U.S. Coast Guard, has called Hsieh’s work on the Deepwater Horizon recovery “a game-changer” and said it provided confidence to finally close the well. Hsieh and his co-workers also provided the official calculation of the amount of oil that spilled from the well. For his work, Hsieh was named the 2011 Federal Employee of the Year by the Partnership for Public Service.

Hsieh stepped in ready to run his evaluation after workers clamped down the cap at Deepwater Horizon. The pressure readings were mixed – too high to clearly indicate a leak but too low to be absolutely sure that the well was sound.

“Most people were leaning toward reopening the well because the risk of an underground blowout was unacceptable,” Hsieh said.

Hsieh had limited time to perform the analysis – the longer the well remained capped, the greater chance of a blowout. He stayed up all night running the numbers. His results were clear: The well would hold.

For the next two weeks, the scientists worked around the clock checking the well and refining the simulation.

“As time went on, the monitoring showed no sign of a leak,” Hsieh said. “It all ended well.”

2011 Federal Employee of the Year from Partnership for Public Service on Vimeo.