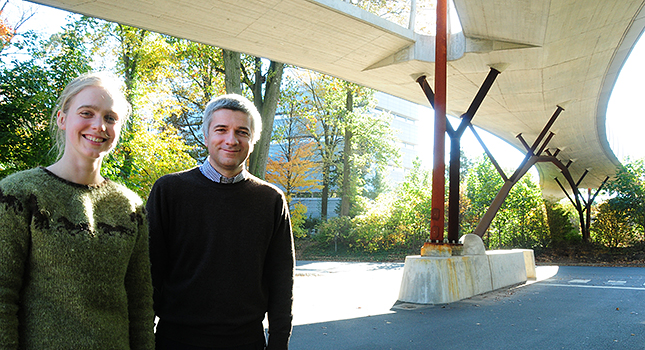 For drivers entering campus along Washington Road, the Streicker Bridge passes without much notice. A thin ribbon of concrete and steel spun over a single delicate arch, the bridge’s elegant but understated design does not receive as much attention as some of the University’s more recognizable monuments.

In a way, that is a tribute to the designers who worked to match the bridge to the woods and steep hills surrounding it. With bridge supports that are weathered and branched to resemble tree trunks and a deck that curves to meet the varying grades on both sides of the road, the Streicker Bridge fits perfectly into the landscape.

“When I think about the Streicker Bridge, I think about harmony,” said Branko Gli≈°ic, an assistant professor of civil and environmental engineering who uses the bridge for research and as a teaching tool in some of his classes. Although the bridge is matched well with its surroundings, the structure merits a longer glance, Gli≈°ic said. The 350 foot span is a masterful design, he said, light enough to do without heavy supporting piers. The deck rises 24 feet above the roadway in an elongated arch that makes the crossing easy for pedestrians. The slender steel arch that supports the deck is a funicular polygon – a curve made of straight segments – which balances the forces on the deck and allows for its thin shape.

“It is an outstanding piece of advanced engineering,” Gli≈°ic said.

The bridge, funded by a gift from John Harrison Streicker, a member of the Class of 1964, fills a missing link in the pedestrian path across the southern edge of campus. The deck has an unusual shape, splitting into forks at both ends. In addition to serving a structural function – the forks provide horizontal stability for the bridge – it also serves a symbolic end by linking different scientific disciplines represented by the buildings on each side of Washington Road. The Lewis-Sigler Institute for Integrative Genomics and the (under construction) neuroscience and psychology buildings are on the west side, and the new Frick Chemistry Laboratory and Jadwin Hall, home to the physics department, are on the east. The bridge was designed by Christian Menn, a world-renowned Swiss engineer whose bridges are typically spare and elegant. David Billington ’50, a professor emeritus of civil and environmental engineering and a longtime friend of Menn’s, said a great engineer never sets out to make a beautiful structure – it is inherent in the work.

“They don’t say ‘I am going to set out to make this an aesthetic design,’ it is part of their fiber,” he said. “They design it to be efficient and economic, and it will also be beautiful.”

At the time he was selected to design the bridge, Menn had a long relationship with Princeton. His work had been exhibited on the campus, particularly in a major 2003 exhibition called, “The Art of Structural Design: A Swiss Legacy.” “The Streicker Bridge does not come out of the blue,” Billington said.

The engineer of record for the project who oversaw the construction was Theodore Zoli, a vice president with HNTB engineering of New York and a member of the Princeton Class of 1988. “The wonderful character of Menn’s work is one of restraint,” said Zoli, a 2009 MacArthur grant recipient who has completed many prominent bridge designs including the Lake Champlain Bridge and who collaborated with Menn on Boston’s Zakim Bunker Hill Bridge. “He is known for not overemphasizing the opportunity, but getting the scale right.” 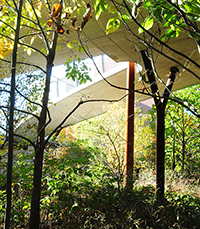 One of the bridge’s more unique features is the brown color of its supports, which match the trees in the woods on both sides of Washington Road. The color is a property of “weathering steel,” which, as its name implies, allows a layer of rust to form on the outside without affecting the strength or durability of the support. Obtaining the steel was a job in itself because no foundries were making the type and quantity of steel needed for the bridge. So Zoli and project managers scoured steel yards across the country.

“We found the last cache of weathering steel in the country,” Zoli said. It was a lucky find: The steel turned out to be stronger than expected. The bridge also serves an academic function by allowing engineering students to monitor stresses and motion. During construction, Gli≈°ic oversaw the installation of 100 point sensors and a 122-foot cable sensor inside the structure. The sensors are capable of taking about 25,000 measurements per second and function like a nervous system for the bridge, Gli≈°ic said. “The structure is not only an engineering achievement,” Gli≈°ic said, “it also stimulates new discoveries both by serving as an inspiration to students and as a laboratory.”