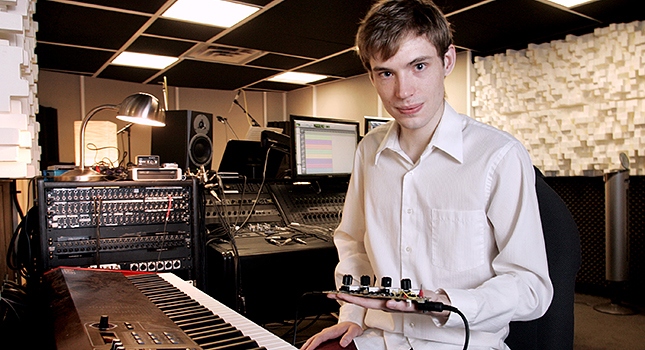 The original Moog synthesizer, a staple of ’70s music, had its heyday long before senior Jeffrey Snyder learned to play the keyboard, but Snyder loved that warm ’70s sound.

The problem was that he found it nearly impossible to reproduce. For most musicians, the story would end there. Snyder, a computer science major, decided to build a gadget to create his own retro sound.

“Almost any computer has the ability to make these sounds,” Snyder said. In fact, Moog’s current line of instruments is far sleeker and more compact than their progenitors. But Snyder was looking to reduce the equipment to its simplest possible form.

For his junior-year independent research, Snyder spent months working on circuit designs and programming a microprocessor. An active musician, he performs with the Princeton Rock Ensemble and the Princeton Jazz Ensemble. Snyder also used the Internet to poll dozens of keyboardists for desired features. With the help of Rebecca Fiebrink, Ph.D. ’11, assistant professor of computer science, and Jeffrey O. Snyder (no relation), the music department’s technical director, Snyder created the SoundBar.

About the same size as a large TV remote, SoundBar connects to a standard keyboard and allows it to faithfully recreate the sound of the ’60s and ’70s Snyder said he has a lot of work to do before the SoundBar is finished – the current device is a prototype. But he said there is a real value in hands-on creation both musically and scientifically.

“As a computer scientist, I wanted to study how people interact with electronic insturments,” he said. “But this is also a tool I would love to use in a performance.”