Children let out “oohs” and “ahhs” the moment the big gas flame hit samples of lithium, sodium, copper and phosphorus on a lab table at Princeton University. Glorious balls of red, yellow, green and violet flame flashed around the chemicals. The children layered on giggles and twitters seconds later when Omelan Stryzak shoved electrodes into the ends of a pickle and cranked up 120 volts. The pickle sputtered and glowed an orangey yellow.

Now it was time for a quiz. Given the colors that the flaming chemicals produced, what chemical was in the pickle?

“Sodium!” cried a few of the observant children, correctly identifying the presence of salt in the pickle.

It was just the reaction that Professor Howard Stone was seeking. Stone, the Donald R. Dixon ’69 and Elizabeth W. Dixon Professor of Mechanical and Aerospace Engineering at Princeton, was leading the fourth annual Holiday Science Lecture for a packed audience of parents and children in McDonnell Hall on Saturday, Dec. 15. The topic for this year was “Let there be light: A celebration of color,” which allowed Stone and Stryzak, manager of the undergraduate labs and demonstrations in the physics department, ample opportunities to dazzle the children with eye-catching demonstrations while imparting fundamental concepts about light and how scientists think about it.

“I want you to think about the world around you,” Stone told the students as he introduced the talk. “And what we are going to do is share some ideas with you that help illustrate how wonderful the world is, how amazing it is.”

The fast-paced series of demonstrations often required the schoolchildren, who were all given colored T-shirts, to come to the front of the auditorium to act out phenomena such as a prism breaking white light into the colors of the rainbow, or a glass of water bending a ray of light. Other demonstrations delved into even weightier territory. Stone discussed the evidence for thinking of light as a particle while Stryzak pummeled him with white plastic balls (photons), then co-opted the entire audience to perform “the wave” as he discussed light’s dual status as a particle and a wave. 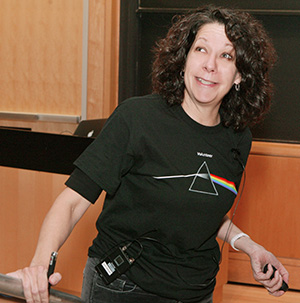 The talk concluded with Bonnie Bassler, Princeton’s Squibb Professor in Molecular Biology, demonstrating the critical role of color in biology. Bassler captivated students with images showing how staining cells different colors has revealed the workings of the brain, and how staining the nucleus of a cell and its chromosomes has given dramatic clarity to the process of cell division. Bassler narrated a video clip that showed red-stained chromosomes lining up on either side of a nucleus (“This one is being bad; it has to get in line,” she quipped) as a cell prepared to divide.

“Using color, you can actually watch life happen,” she said.

After the lectures, which attracted a total audience of about 700 over two sessions, the children were buzzing. Erin Heyeck and her friend Julia Alito, both 10, were impressed by the biology. “I liked the part where they showed the colors in different cells,” said Heyeck. “It’s really cool that you can see that happen.”

Andrew Lambert, 9, liked the flames. “I thought it was pretty cool,” he said. His friend Stephane Morel, 9, also liked the glowing pickle. “I realized there was something in it, but I didn’t remember it was sodium,” he said.

For Stone, the annual event is a chance to stretch his thinking about explanations he doesn’t have to make during his regular teaching and research, which focuses on fluid dynamics. He started the holiday lecture in 2002 in Cambridge, Mass., when he was a professor at Harvard University, and then brought it to Princeton when he joined the faculty in 2009. He still travels to Cambridge to give the lecture; this year he led two sessions at Harvard on Dec. 8.

Stone said the original inspiration was the well-known Royal Institution Christmas Lectures in London, which were started by physicist Michael Faraday in 1825 and continue to be given by prominent scientists today. But the lectures also are a chance to connect with colleagues like Bassler and others to brainstorm topics and ways to explain them, he said.

“It’s fun to think about how you explain things to people,” Stone said. “It makes me a better scientist and engineer. How do you learn to be creative? You have to practice, and just talking with your colleagues about how to explain things makes you more creative.”

The annual Holiday Lecture is supported by the Princeton Center for Complex Materials, a National Science Foundation-funded research program at the Princeton Institute for the Science and Technology of Materials. Additional support comes from the Department of Physics, the Office of Community and Regional Affairs, and the School of Engineering and Applied Science.