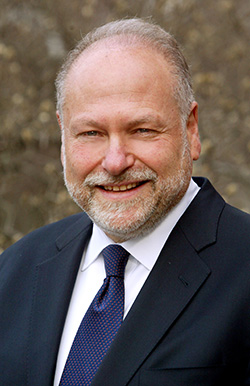 Princeton University has appointed as dean for research Pablo Debenedetti, a longtime Princeton engineering professor and vice dean of the School of Engineering and Applied Science.

Debenedetti, the Class of 1950 Professor in Engineering and Applied Science and professor of chemical and biological engineering, will begin his new role on July 1. He succeeds A.J. Stewart Smith, who will become the University’s vice president for the U.S. Department of Energy’s Princeton Plasma Physics Laboratory.

The position of dean for research was created in 2006 with Smith as its first incumbent. The dean is responsible for encouraging innovation and collaboration across campus, promoting Princeton research to potential donors and supporters, ensuring that all research meets the highest ethical standards, and encouraging an entrepreneurial spirit that aims to bring what’s developed in the lab to market and the public.

The dean for research works directly with the provost and with other senior leaders to develop and support a dynamic intellectual community. Debenedetti will oversee the offices of Corporate and Foundation Relations, Research Integrity and Assurance, Research and Project Administration, Research Resources, and Technology Licensing.

In announcing the appointment, President Shirley Tilghman said, “As a distinguished scientist and a seasoned academic leader, Pablo Debenedetti is unusually well suited to support and strengthen Princeton’s capacity to conduct research of the highest possible quality and in accordance with the highest possible standards.”

H. Vincent Poor, dean of the engineering, said that Debenedetti’s achievements as vice dean and, previously, as chair of the Department of Chemical Engineering, have been remarkable. “It has been a true pleasure working with him in this role,” Poor said. “And, although he will certainly be missed in the School, I look forward to continuing to work with him in his new role to continue the very productive relationship that exists between the School and the Office of the Dean for Research.”

Provost Christopher Eisgruber said that Debenedetti has the experience and respect of faculty members and administrators that he will need to promote Princeton research in times characterized by stiff competition and limited funds.

“I am thrilled that Pablo Debenedetti has agreed to serve as Princeton’s next dean for research. Pablo is a brilliant scholar, a dedicated University citizen and a proven administrator,” Eisgruber said. “During his five years as vice dean for the School of Engineering and Applied Science, Pablo earned the admiration of faculty members and administrative staff throughout the University. In a time when research funding is under pressure from many directions, he has the experience, acumen and leadership skills needed to help our faculty members compete effectively for grants and diversify their sources of support.

“Stew Smith, Princeton’s first dean for research, did a marvelous job building an outstanding staff and defining the mission of his office,” Eisgruber continued. “The platform that Stew established will enable his successor to focus on a new and timely range of issues, including how to facilitate applications for large center grants and how to enrich Princeton’s connections to the corporate and foundation worlds.”

“It’s a real honor to serve Princeton as dean for research because Princeton is one of the world’s great research universities,” said Debenedetti. “Stew Smith did an excellent job as founding dean for research. He has rationalized the University’s research infrastructure, so he provides a very solid basis on which to start.”

Debenedetti said he brings to the position his years as a researcher in the field of thermodynamics and statistical mechanics of liquids and glasses, as well as experience as an administrator with an eye for supporting cutting-edge and collaborative research. Combined, these roles endow him with a firsthand perspective of the support and guidance faculty members need with an administrator’s sense of how to generate support for research and technology transfer.

Poor said Debenedetti demonstrated these qualities as vice dean of engineering. “He initiated this position, and developed a portfolio of crucial responsibilities that have added substantially to the effectiveness of the leadership of the School,” Poor said. “Notably, he has played vital roles in the expansion of the school’s facilities to Hoyt Laboratory and the Andlinger Laboratory complex, and in leading many other activities that have been made possible by the resources garnered through the Aspire campaign.”

Poor added that he also enjoyed working with Smith in his role as the inaugural dean for research. “I truly appreciate all that Stew has done for the engineering school and its faculty during his tenure,” Poor said.

Debenedetti joined the Princeton faculty in 1985 after receiving his Ph.D. in chemical engineering from the Massachusetts Institute of Technology. He has received numerous honors, including election to the National Academy of Sciences in 2012, the American Academy of Arts and Sciences in 2008, and the National Academy of Engineering in 2000, being named a Fellow of the American Association for the Advancement of Science in 2011, and being credited among the “100 Chemical Engineers of the Modern Era” by the American Institute of Chemical Engineers in 2008.

From 1996 to 2004, Debenedetti served as chair of the chemical engineering department. In 2008, he was named vice dean of engineering. In that role, Debenedetti said, he strove to use innovation funds to identify and promote “very new ideas,” which he described as work that has great potential and explores unfamiliar frontiers. He hopes to expand that vision University-wide.