The sun emerged on cue from a rainy sky on the afternoon of Monday, June 3, as the Class of 2013 celebrated the achievements of new graduates in this year’s Class Day.

In his opening remarks, H. Vincent Poor, the dean of engineering, listed the accomplishments of the class, remarking that its members had developed new technologies, set athletic records, made scientific discoveries, created works of art and contributed to communities both locally and around the world. He said that he could not overstate “how impressed my colleagues and I are with this year’s class.”

Poor also noted that with 237 graduates, the Class of 2013 is the largest in the history of Princeton engineering.

“This is the largest tent we have ever had,” he joked.

He said that members of the class would soon be moving on to distinguished graduate programs and top employers, but he urged the graduates to remain in contact with their classmates and the school.

“Don’t forget the orange and black,” Poor said. “Your relation with Princeton is a lifelong affair.”

The winners of major awards at the Princeton Engineering 2013 Class Day, as presented by Associate Dean for Undergraduate Affairs Peter Bogucki, as well as awards given to engineering students at the University Class Day event, were:

A mechanical and aerospace engineering major from Princeton Junction, New Jersey, Loughran was awarded the J. Rich Steers Award, which recognizes scholastic performance that demonstrates potential for further engineering study and practice. Along with Ryan Mich, Brian Fishbein, and Tom Colosky, Loughran designed, fabricated and tested a low-cost solar-powered airplane capable of flying indefinitely. Their adviser, Professor Luigi Martinelli, said that “the project demonstrated that a continuous flight UAV [Unmanned Autonomous Vehicle] can be built at a cost comparable to a high-end road bicycle.” Loughran, who was a captain of the varsity swimming team, will join the U.S. Navy as a nuclear propulsion officer.

A civil and environmental engineering major from Columbus, Ohio, Maurer studied the suitability of U.S. station data for use in the Water Erosion Prediction Project model. Her work led to a thesis entitled “Analysis of Conglomerate CLIGEN files in WEPP” that her adviser, Assistant Professor Kelly Caylor, said “reinforces the need for better data networks in developing regions.” After graduation, Maurer will work through Project 55 at CNT Energy, an organization that helps consumers control energy costs.

A chemical and biological engineering major from North Potomac, Maryland, Sahu was awarded the Kephart Prize for outstanding work in the area of engineering physics. For his thesis, Sahu studied the use of bacteria in fuel cells. In an innovative approach, he designed and fabricated a fuel cell that uses bacteria as a vehicle to oxidize organic and inorganic matter to produce electricity. His device also a liquid-liquid interface rather than a physical barrier between the anodic and cathodic elements. Sahu’s research adviser, Professor Howard Stone, said the thesis “led to a next-generation design that we will be assessing this summer in my lab.” 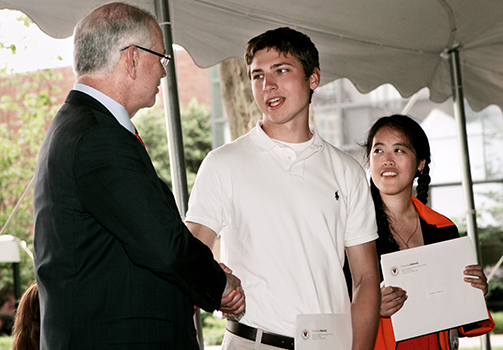 A mechanical and aerospace engineering major from Pittsburgh, Pennsylvania, Subosits was awarded the Tau Beta Pi Prize, which is given to the member of the senior who has significantly contributed a major part of his or her time to the engineering school. As Tau Beta Pi vice president, Subosits coordinated the organization’s engineering school tours, a major operation during peak periods for visits by prospective students. In an independent work project, along with Jingwen Du, Dillon McEwan, and Arul Suresh, he designed and tested a thrust-vectoring stabilization system for a tailless fighter aircraft. Their adviser, Professor Robert Stengel, said it “was an outstanding and well-documented independent work project.” 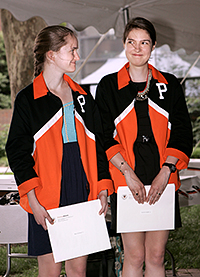 Ousterhout, a computer science major from Palo Alto, California, and Stouffer, a computer science major from Potomac, Maryland, received the Elgin Prize for work that advances the interests of the engineering school in the community at large. While serving as co-presidents of Princeton Women in Computer Science (PWiCS) in the fall of 2011, Ousterhout and Stouffer started a program at Stuart Country Day School to introduce girls in grades seven through twelve to computing through mentoring, tutoring, and guidance on projects. Last year, several Stuart students won a national competition in programming educational videogames for younger children, while this year Stuart girls fielded a team in the FIRST robotics competition with guidance from PWiCS members. After graduation, Osterhout will be starting a Ph.D. in Computer Science at MIT as the holder of a Jacobs Presidential Fellowship, a Hertz Fellowship, and a National Science Foundation graduate fellowship. Stouffer will be studying medical genetics at Cambridge University as the holder of a Gates Cambridge Scholarship, followed by a year in South Africa at the KwaZulu-Natal Research Institute for Tuberculosis and HIV in Durban applying machine-learning algorithms to the study of disease diagnosis and treatment as the holder of a Sachs Scholarship.

An operations research and financial engineering major from Sanford, North Carolina, Akinosho received the Dulles Award, which is given to a senior whose activities at Princeton best represent the university’s informal motto, “Princeton in the nation’s service and in the service of all nations.” A residential college advisor in Wilson College, Akinosho worked in various roles for Campus Recreation, including serving as a student intramural sports supervisor and a volunteer youth basketball coach. In the summer of 2011, she independently created an internship supported by the University’s Center for Health and Wellbeing to better identify the disparities of health care in Ghana. She conducted independent research, volunteered at a hospital in a remote area of the country and worked with nonprofit organizations on local health issues.

A mechanical and aerospace engineering major from Princeton Junction, New Jersey, Loughran received the Class of 1916 Cup, which is presented to the senior varsity letter winner with the highest academic standing. Loughran was the team captain of the 2013 men’s swimming and diving team, helping lead Princeton to its fifth straight Ivy League championship. 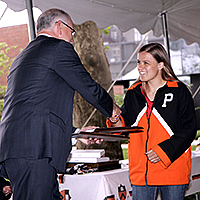 A computer science major from Redmond, Washington, Button was awarded the George J. Mueller Award for combining high scholarly achievement with excellence in intercollegiate athletics. She has been the starting right fielder for the women’s softball team after moving there from second base in sophomore year. In her senior year, Button hit .277 with a team-leading 120 doubles and was error-free in the outfield. In her last at-bat in the season finale at Cornell, she hit a home run. Button’s senior independent work was entitled ‚ÄúImproving the Student Course Guide” advised by Professor Brian Kernighan, in which she created a system for extracting the crucial comment information about courses from the current imperfect system to make the information readily accessible and to figure out how assess the helpfulness of the comments and rank them higher. Kernighan thought it was “an excellent project, with real promise of being genuinely useful.”

A chemical and biological engineering major from San Francisco, Safford is a two-time All American fencer. Safford, who fences with the epee, was also twice selected to the All-Ivy first team and was an NCAA regional champion. Her senior thesis was titled “Individual-based Modeling of Collective Dynamics” advised by Professor Yiannis Kevrekidis. In order to study the collective behavior of swarms of interacting individuals, she designed machine-learning algorithms to process simulation data and determine predictors of swarm breakup. Professor Kevrekidis called it a deep, extensive and truly original exercise in stochastic modeling, scientific computation and data mining.

This team of students ‚Äì all mechanical and aerospace engineering majors, except Payne, who majored in electrical engineering ‚Äì designed and built a six-legged robotic insect with an articulated flexible spine, called xJ√ºs. Previous hexapedal robots used a rigid spine, but locating the legs, motor and controllers on three articulated segments gave the robot much greater agility in navigating rough terrain with a smooth gait. The team had to build and integrate the components, write the software to control them, test the robot over differing surfaces and evaluate its power requirements, and monitor its stability using an on-board accelerometer. Professors Phil Holmes and Daniel Nosenchuck advised this project, but perhaps the most telling comment came from Professor Daniel Koditschek of the University of Pennsylvania, a pioneer in hexapedal robots, who wrote after seeing the robot perform “I must confess to astonishment that such young and inexperienced engineers could conceive ‚Äì much less achieve ‚Äì a systems engineering effort on this scale‚Ä¶.without reservation‚Ä¶this is the most impressive undergraduate project I have seen in three decades of faculty life at Yale, Michigan and now Penn.”

A computer science major from Potomac, Maryland, Stouffer was awarded the von Jaskowsky Prize for participating in research that has resulted in a contribution to her field of study and whose interaction with other students, faculty and staff has added to the quality of university life. In the fall of her junior year, Stouffer worked on a challenging problem focusing on the question of how an agent can learn to behave adaptively without a teacher; during a summer at Microsoft Research, she worked on a complex machine learning program; her senior thesis, “M.O.M. My Own Map. HMM Techniques for Predicting Wandering in Alzheimer‚Äôs and Dementia Patients,” combined a variety of techniques to detect when a person is navigating an unusual and perhaps unintended path. Her advisor, Professor Margaret Martonosi, called Stouffer “truly a remarkable computer scientist.”

A civil and environmental engineering major from Sfantu Gheorghe, Romania, Szerzo worked with Professors Branko Glisiƒá and Sigrid Adriaenssens on the design of a deployable smart structure, a pantograph tower that interacts with its environment and adapts its shape. The project involved the installation of fiber optic sensors and a linear actuator on the structure, and the development of software that analyses the data from the sensor and tells the actuators what to do. Professor Glisiƒá says that Szerzo‚Äôs contribution “was crucial for the success of the project,” resulting in a journal paper. His senior thesis, “Parametric Structural Analysis and Design of a Membrane-Stiffened Looped Cable Roof‚Äù was advised by Professor Adriaenssens. She said that “the resulting tool is so practical that it will have a tremendous impact on design decisions.” 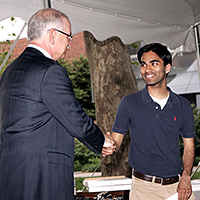 A mechanical and aerospace engineering major from Ivyland, Pennsylvania, Sinha was awarded the James Haze Edgar Palmer Prize for scholarship and capacity for leadership. The valedictorian of the Class of 2013, Sinha received the grade of A+ in 15 courses and A in 18 others. His scholarly accomplishments were recognized twice with the Shapiro Prize for Academic Excellence and with the George B. Wood Legacy Sophomore Prize, and Class of 1939 Scholar Award, and a Goldwater Scholarship, as well as induction into Phi Beta Kappa as a junior. He served as president of Tau Beta Pi and organized the chapter’s 40th anniversary. His senior thesis, “Distributed Consensus Protocols in Adaptive Multi-Agent Systems,” examined how individual agents in a network try to come to consensus with the rest of the group. His adviser, Professor Naomi Leonard, said that Sinha undertook a “beautiful geometric approach to explaining the behavior of the dynamical system he proposed‚Ä¶highly sophisticated and insightful.” After graduation, Sinha will study information engineering at Cambridge University as the holder of a Churchill Scholarship, and after that he will pursue a Ph.D. at Stanford as the holder of a Hertz Fellowship.