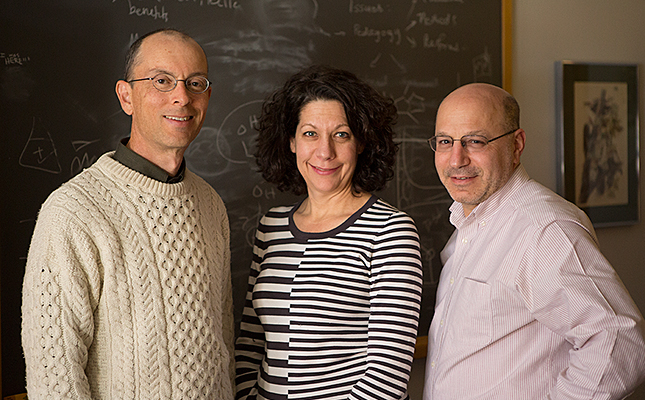 Princeton engineers are part of the two research teams awarded funding in 2014 through the University’s Eric and Wendy Schmidt Transformative Technology Fund. The fund aims to foster technologies that have the capacity to transform entire fields of inquiry but may be considered too risky or forward-looking to obtain funding from traditional sources.

A microscope for probing bacterial films

Experts of self-preservation, bacteria can grow into sheets known as biofilms that evade an- tibiotics, clog medical devices, and foul water filters and pipes. To counter these negative effects, a team of Princeton researchers is de- veloping a microscope to peer inside the slimy mantle and find the genes that make biofilms so successful.

“We want to ask, at the single-cell level, what chemical and physical and mathematical rules are underpinning the assembly of these films, and then we want to do something about it,” said Bonnie Bassler, the Squibb Professor in Molecular Biology. Bassler is co-leading the project with Ned Wingreen, the Howard A. Prior Professor of the Life Sciences, and Howard Stone, the Donald R. Dixon ’69 and Elizabeth W. Dixon Professor of Mechanical and Aero- space Engineering.

An early version of the microscope

was developed by Princeton postdoctoral re- searcher Knut Drescher, who is jointly advised by Bassler, Stone and Wingreen. The Schmidt Fund will enable the team to add to the micro- scope’s capabilities.

The existing microscope has enabled the researchers to observe how biofilms develop, cell by cell, when fluids are flowing past the cells. In nature, biofilms are influenced by the forces that fluids exert on bacterial cells as they gather to form the biofilm and communi- cate with each other.

The improved microscope should allow the researchers to find whether cells from certain parts of the biofilm, such as the edge that faces the fluid, have special attributes.

“It is like taking a city apart, one high-rise at a time,” said Stone, whose expertise is on fluid dynamics. “We want to know what struc- tures are there, and what their functions are.”

The researchers will apply two techniques for interrogating cells: optogenetics, which involves using laser light to turn on and off individual genes, and deep sequencing of the cellular genes.

“There are very strong hints that the cells in biofilms take on different roles depending on their locations, but imaging alone cannot tell you that,” said Wingreen. “The beauty of optogenetics is that we can manipulate indi- vidual genes in specific cells to unpack what all of these different interactions are doing.”

A new technology for 3-D imaging at the nanoscale

Electronic technologies of the future as well as investigations of cells and other bio- logical materials depend on parts that are just nanometers – billionths of a meter – in size. Supported by the Schmidt Fund, Princeton researchers are developing an instrument for measuring the nanoscale properties of thin films of plastic and biological materials known generally as “soft matter,” which are neither simple liquids nor crystalline solids.

The instrument will measure the flow of small amounts of soft matter in three dimen- sions, including structures in living cells. Called a 3-D NanoRheometer – a rheometer is a device that measures flow – the instrument will help researchers explain the behavior of plastics and other soft matter restricted to confined environments.

The device will fill an important gap in the needs of researchers, explained project leader Rodney Priestley, an assistant professor of chemical and biological engineering.

“Nanostructured materials behave differ- ently than the same materials in a larger quan- tity,” he said. “To advance technology, there

is a need to develop experimental techniques that allow us to find out why that is.”

Along with Priestley, the team members are Craig Arnold, professor of mechanical and aerospace engineering; Clifford Brangwynne, assistant professor of chemical and biological engineering; and Richard Register, the Eugene Higgins Professor of Chemical and Biological Engineering. The four professors are associ- ated with the Princeton Center for Complex Materials. 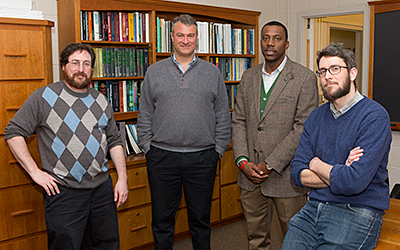 Researchers currently use microscopes to track nanomarkers (particles 9,000 times smaller than a human hair’s width) in soft matter, but this method performs poorly at tracking particles in three dimensions.

“If the nanomarkers move toward or away from the microscope, they will move out of focus and you won’t be able to detect them,” Arnold said.

A new, fast-focusing microscope lens developed by Arnold’s research group will be employed to help solve this problem.

One of the first tasks in the two-year program will be to engineer a system that can rapidly – or even simultaneously – acquire scans of the nanomarkers at varying depths embedded in plastics. The team will also integrate a second imaging system to enhance the results, and develop a computer program to combine the scans into images of the nanomarkers’ movements.

In the second year of the program, the researchers will expand the use of the 3-D NanoRheometer to study structures in living cells and explore how these relate to cellular health, said Brangwynne, whose group studies the self-assembly of biological materials.

Register and Priestley also will use the technology to gain insight into the properties of new types of polymers, which have many industrial uses. “The Schmidt Fund is invalu- able in making this project possible,” Register said. “These sorts of opportunities make it great to be at Princeton.”