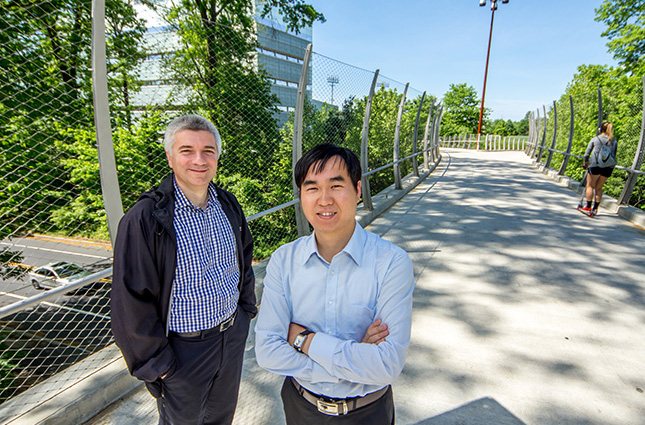 After a rush-hour bridge collapse killed and injured hundreds in Minneapolis in 2007, Branko GlisÃåi wanted to know if he could develop a more efficient sensor to help engineers detect the signs of failure before it was too late.

Glišić, an associate professor of civil and environmental engineering, specializes in monitoring the condition of large structures – one of his research teams uses the University’s Streicker Bridge as a laboratory. Typically, the work is done with arrays of thin metal wires – although researchers use fiber optics in Streicker – but after Glišić attended a presentation by a colleague at Princeton, he thought there might be a better approach.

But to try it, he needed researchers with experience in chemical engineering.

“My group has been working for a while now to discover new properties for a class of material called conductive polymers,” said Yueh-Lin (Lynn) Loo, the Theodora D. ’78 and William H. Walton III ’74 Professor in Engineering. “When Branko suggested that we could exploit the characteristics of the materials for sensing deformation in structures, I thought it was an intriguing idea.”

The federal government estimates that about 150,000 of the nation’s 607,000 bridges are structurally deficient or functionally obsolete. Even though the overwhelming majority of those are in no danger of collapse, improving systems that monitor deteriorated bridges (and other aging structures) to provide advance warning of a failure and prioritize repairs is a high priority for engineers.

Currently, engineers monitor bridges with various types of sensors ranging from vibrating wires to fiber optics. A traditional method uses constructions of thin wires called strain gauges. Basically, strain gauges measure the strain on bridges and other large structures, which is caused by loading, environmental influences and material properties. The strain changes the wires’ electrical resistance, and that change can be read by monitors, and later converted to stress using appropriate algorithms.

The metal gauges work well for many applications, but Loo and Glišić felt that conducting polymers, which can be thought of as plastics that conduct electricity, could offer a number of advantages. First, metal wires can only handle so much strain before they snap and stop sending measurements.

“In some cases, you might have cracking that would not threaten the structure, but it would break the sensor,” Glišić said. “Polymers are much more ductile than metal – they can be stretched to a much greater extent.” 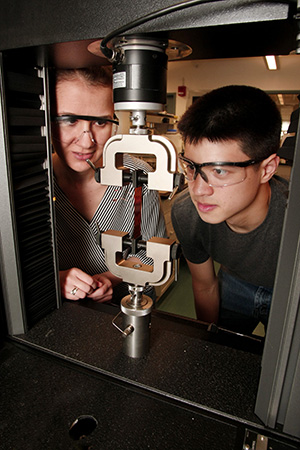 The polymer sensors can also measure several different types of strain at once, which should let engineers isolate specific problems affecting a bridge. Bridges and other concrete structures must withstand strain from outside forces, such as wind and heavy loads. But the concrete also naturally shrinks over time, and also contracts and expands in response to temperature and humidity, which adds another type of load.

The ability to monitor several conditions at once results from an unusual property of a conductive polymer, polyaniline. One of Loo’s graduate students, Melda Sezen, discovered the property during a routine test in which she exposed the polymer to acid to increase its conductivity. She noticed something strange: the acid changed the material’s electrical response to stretching.

“Normally, when you stretch the material, its resistance increases,” said Sezen, now a third-year graduate student in chemical and biological engineering. “But after processing, stretching causes the resistance to decrease.”

The discovery seemed significant for bridge monitoring, Glišić said, because it allows the sensors to deliver a more complex set of information. “So there was an intriguing possibility of developing a circuit that would produce a positive and a negative signal in response to stretching. My former graduate student Yao Yao performed theoretical analysis of the circuit and confirmed conceptual feasibility.”

The researchers are working to use this switching behavior to develop a sensor that will allow engineers to isolate different types of strain. Glišić said it is possible to do this with metal sensors, but it requires a fairly complex array.

“We intend to build a single gauge that would tell us all of the factors – how much is the concrete shrinkage, what is the temperature influence, how much is the mechanical action,” he said.

The work so far has been supported by the engineering school’s Anonymous Fund. Glišić said the initial support has been critical because the original idea for the new sensors would have been difficult to fund by traditional means.

“To do the research, you need funding,” he said. “But to get the funding you need some preliminary results. That is why the University’s support has been so important.”