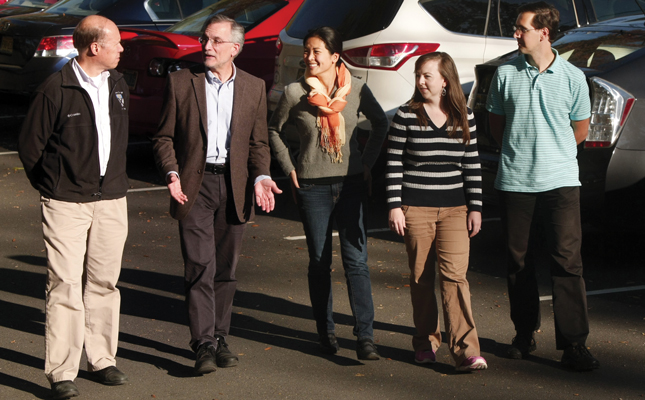 In the future, cars could run on fuel that started as a tree branch – part of a virtuous cycle that begins in the woods and ends with cleaner air and decreasing levels of greenhouse gases in the atmosphere.

In a collaboration between chemical and environmental engineers, Princeton researchers are designing processes to create fuels from twigs and branches left after a lumber harvest. These fuels would serve as an alternative to petroleum fuels and to biofuels grown on valuable cropland.

“We will likely need energy options with negative greenhouse gas emissions down the road to deal with global warming,” said Eric Larson, senior research engineer at the Andlinger Center the Energy and the Environment.

Larson worked with Lynn Loo Ph.D. ’01, the Theodora D. ’78 and William H. Walton III ’74 Professor in Engineering and chemical and biological engineering, Anna Hailey, a graduate student, and Hans Meerman, a postdoctoral researcher, to analyze how such systems would work and what they might cost.

Creating these fuels does produce the greenhouse gas carbon dioxide as a byproduct, but Michael Celia Ph.D. ’83, the Theodora Shelton Pitney Professor of Environmental Studies and professor of civil and environmental engineering, said the system can greatly reduce CO2 emissions by pumping the gas, via depleted natural gas wells, into geological formations deep underground.

“Instead of venting into the atmosphere, which we don’t want to do, we push the CO2 underground, where we expect it will stay for thousands of years,” said Celia, who worked with graduate student Ryan Edwards and undergraduate student Cynthia Kanno on the project.

The team’s projections show that locking CO2 underground could make the process “carbon negative,” meaning that the trees used to create the fuel absorb more carbon than the fuel releases into the atmosphere.

To reduce transportation costs, the plants that create the fuels should be built close to natural gas wells, Loo said. There are many possible locations near the Marcellus Shale Formation, an area being tapped for natural gas in Pennsylvania and West Virginia.

Some of the earliest wells drilled into the Marcellus will go out of production within a decade and could be ready for greenhouse gas storage, Celia said.

Because the region also is rich with forests, the team says the process is feasible, if the right economic and policy conditions are in place.

“The individual technologies exist,” Loo said, “but they haven’t been pieced together into a system. Our work provides a kind of roadmap for doing this.”