A small subset of the most intense droughts move across continents in predictable patterns, according to a new study published March 4 in the journal Geophysical Research Letters by researchers in Austria and the United States. The study could help improve projections of future drought, allowing for more effective planning.

While most droughts tend to stay near their starting place, approximately 10 percent travel at least 1,400 to 3,100 kilometers (depending on the continent), the study found. These traveling droughts also tend to be the largest and most severe ones, with the highest potential for damage to the agriculture, energy, water, and humanitarian aid sectors. 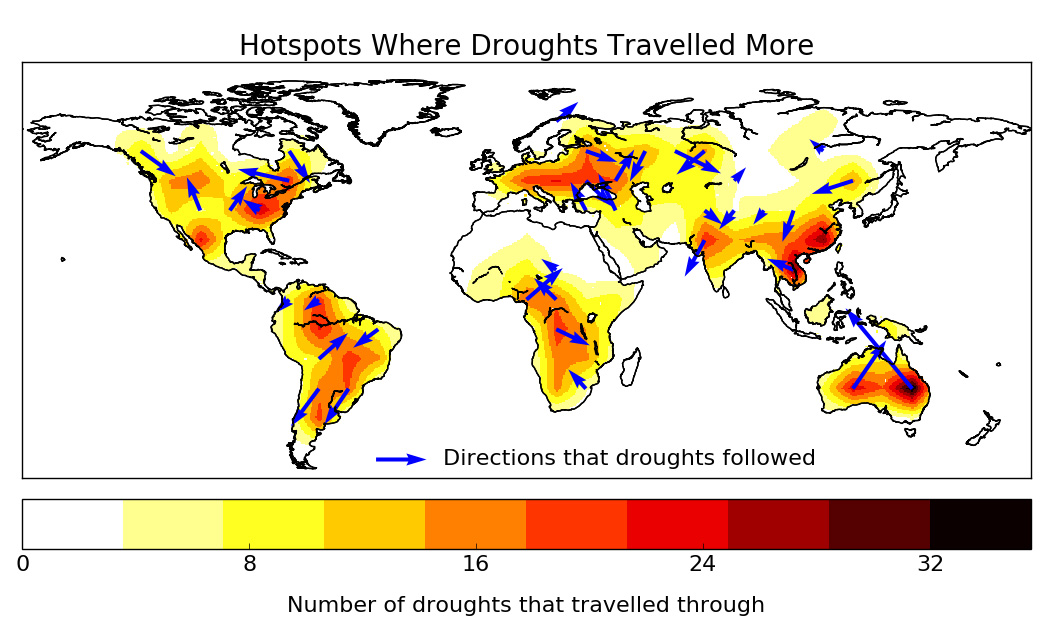 “Most people think of a drought as a local or regional problem, but some intense droughts actually migrate, like a slow-motion hurricane on a timescale of months to years instead of days to weeks,” said Julio Herrera-Estrada, a graduate student in civil and environmental engineering at Princeton, who led the study.

The researchers analyzed drought data from 1979 to 2009, identifying 1,420 droughts worldwide. They found hotspots on each continent where a number of droughts had followed similar tracks. For example, in the southwestern United States, droughts tend to move from south to north. In Australia, the researchers found two drought hotspots and common directions of movement, one from the east coast in a northwest direction, the other from the central plains in a northeast direction.

What causes some droughts to travel remains unclear, but the data suggest that feedback between precipitation and evaporation in the atmosphere and land may play a role.

“This study also suggests that there might be specific tipping points in how large and how intense a drought is, beyond which it will carry on growing and intensifying,” said Justin Sheffield, a professor of hydrology and remote sensing at the University of Southampton. Sheffield was Herrera-Estrada’s advisor while serving as research scholar at Princeton.

While the initial onset of a drought remains difficult to predict, the new model could allow researchers to better predict how droughts will evolve and persist.

“This study used an innovative approach to study how droughts evolve in space and time simultaneously, to have a more comprehensive understanding of their behaviors and characteristics, which has not been possible from previous approaches,” said Yusuke Satoh, a researcher at the International Institute for Applied Systems Analysis (IIASA), who also worked on the study.

The study also raises the importance of regional cooperation and of sharing information across borders, whether state or national. One example is the North American Drought Monitor, which brings together measurements and other information from Mexico, the US, and Canada, creating a comprehensive real-time monitoring system.

The researchers said the next step for the work is to examine why and how droughts travel by studying the feedback between evaporation and precipitation in greater detail. Herrera-Estrada also said he would like to analyze how drought behavior might be affected by climate change.