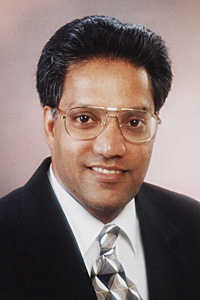 Sundaresan was among four professors from across Princeton University to receive the President’s Award for Distinguished Teaching. He has taught 15 different courses since joining the Princeton faculty in 1980, including many of the core chemical engineering courses at both the undergraduate and graduate levels. One colleague emphasized his great versatility and called him a pillar of the chemical engineering department’s teaching program. In 2005, he won the engineering school’s Distinguished Teacher Award.

Most recently, Sundaresan has led an undergraduate class on “Mass, Momentum and Energy Transport” and a graduate class on “Incompressible Fluid Mechanics.” One graduate student admitted that, before taking Sundaresan’s class, he despised the subject of fluid mechanics.

“But never before or since have I experienced such a dramatic change in my perspective on a subject,” he wrote in nominating Sundaresan. “Professor Sundaresan taught the material in such a clear and logical way that I couldn’t avoid understanding it. I finally saw the beauty and unity of fluid mechanics.”

Other students commended his clear lecture notes and detailed problem sets. Sundaresan is known for creating special tutorials for students who want more exposure to specific topics as well as for sending lengthy e-mails to his entire class in response to questions raised by individuals during office hours. Students also praised his open-door policy and his efforts to seek feedback to improve his courses.

“Never once did he run out of different ways to explain a complicated concept,” wrote one undergraduate. “One particular time, two of my classmates and I went to his office hours for help. ‚Ä¶ He actually refused to let us leave until the confused looks on our faces turned to smiles of understanding.”

Sundaresan received his bachelor’s degree from the Indian Institute of Technology in 1976 and his doctorate from the University of Houston in 1980. An expert in multi-phase flows of materials, Sundaresan has received numerous honors for his work, including the Thomas Baron Award in Fluid-Particle Systems and the Richard Wilhelm Award from the American Institute of Chemical Engineers.

At its Class Day ceremony, the engineering school conferred its Distinguished Teacher Award to Kernighan, who is a professor in the Department of Computer Science. After receiving his Ph.D. from Princeton Engineering in 1969, Kernighan joined Bell Labs, where he was one of the founding fathers of the Unix world, contributing a wealth of software development and text formatting tools. He also wrote several highly used textbooks in computer science, including the classic “C Programming Language,” which has been translated into more than two dozen languages. At Princeton he has taught courses for beginners as well as advanced students.

In nominating Kernighan, a former student said, “‚Ä¶one of his greatest strengths is his ability to introduce and discuss the conceptual underpinnings of a topic, and then help students understand it in the context of something he had worked on during his career.”

Associate Dean of Engineering Margaret Martonosi, in presenting the award said that Kernighan “is both a world-class engineer and a world-class teacher.”

Maria Garlock, assistant professor of civil and environmental engineering, received the Lawrence Keys Jr./Emerson Electric Co. Faculty Advancement Award. Garlock came to Princeton in 2003 after receiving her Ph.D. from Lehigh University. Her recent work focuses on the response of steel structures to fire, a relatively new area of inquiry for the field. She is also interested in the Spanish tradition of structural art and is co-organizing an exhibit of the structural art of Felix Candela, to be held at the Princeton University Art museum in Fall 2008.
Patrick Cheridito, assistant professor of operations research and financial engineering, received the Alfred Rheinstein Award. Cheridito has published numerous papers since he arrived at Princeton in 2003 and is emerging as a highly cited researcher in applied probability. His current research is in the area of dynamic monetary risk measures and he is inventing a new theory of second-order backward stochastic differential equations to support that work.
Olga Troyanskaya, assistant professor of computer science, won the Howard Wentz Award. Troyanskaya joined the Princeton faculty in 2003 and holds a joint appointment in the Lewis-Sigler Institute for Integrative Genomics. She works at the intersection of molecular biology and computer science, developing computational methods for the analysis of gene expression data. Her work has led to the identification of multiple chromosomal changes in biopsies of breast cancer patients.