A new laser technique allows for instant detection of bioterrorism agents, permitting tests that previously were cumbersome or impossible, according to a report in the April 13 issue of Science.

“We do our experiments ‘on the fly,’ so we can get a reading within a tiny fraction of a second,” said Marlan Scully, the lead author of the paper. Scully, Distinguished Professor of Physics at Texas A&M University, holds a joint appointment at Princeton University’s Department of Mechanical and Aerospace Engineering.

In the Science paper, Texas A&M and Princeton researchers report on using lasers to detect anthrax in less than a tenth of a second. “Our procedure can work for monitoring anthrax in the mail, but it can also scan the whole atmosphere,” said Scully. Currently, anthrax tests require that suspicious substances be cultured in a lab, a time-consuming process. 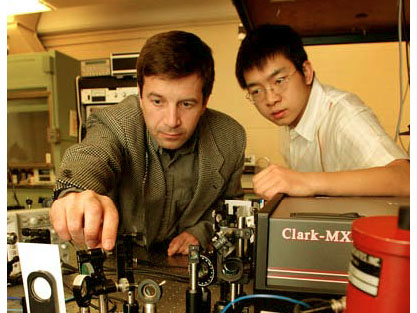 Although the Science paper focuses on anthrax, Scully said the same laser technique could be deployed in a wide range of applications, from national security to health. “There are a lot of other potential applications-monitoring glucose in the blood of diabetics would be just one example,” Scully said.

“This paper is a remarkable achievement in that it makes very clever use of modern techniques for coherent control to detect molecular signals with high sensitivity,” said Mikhail Lukin, a professor of physics at Harvard University. “Many important practical applications can be foreseen for this technology.”

Scully, known in his field as the “quantum cowboy” for his maverick ideas in quantum optics and his sideline of cattle ranching, became interested in the detection of anthrax shortly after the terrorist attacks of Sept. 11. His son, a commercial airline pilot, was worried about the safety of his passengers so he challenged his father to come up with a way to detect bioterrorism agents in real time.

Szymon Suckewer, a professor of mechanical and aerospace engineering at Princeton, called Scully a “brilliant theoretical scientist” and a “world leader in quantum optics.”

“He found several excellent scientists to conduct experiments and was a key person in arranging two very sophisticated experimental set-ups, one at Texas A&M University and the second at Princeton University’s School of Engineering and Applied Science in conjunction with the Princeton Institute for the Science and Technology of Materials,” said Suckewer. “By running two experiments, it was possible to test several parts of the idea in parallel in order to obtain a final result faster. And the excellent results were achieved in less than three years! Many experimentalists find it hard to believe that a ‘pure theoretician’ could lead such difficult experiments.”

The new technique is based on coherent anti-Stokes Raman scattering (CARS), a phenomenon that measures the scattering of light that occurs when a molecule is bombarded by light energy (photons). When a molecule is hit by an appropriate sequence of three laser pulses, it gives off light in a “fingerprint” pattern that is unique to each substance.

“Unfortunately, however, when anthrax molecules are subjected to such study, their CARS signature can be obscured by background signals from other molecules present in the medium containing the anthrax spores,” Scully said.

The Texas A&M-Princeton group addressed this problem using a succession of femtosecond pulses (one femtosecond is one billionth of one millionth of a second) so that the first two laser pulses in the CARS process prepare a coherent molecular vibration, then time-delaying the third laser pulse, which scatters off the molecule and produces the unique fingerprint. This technique in effect cancels the noise from vibrations of non-anthrax molecules.

“This combination of broadband preparation and time-delayed narrowband probing yields a very sensitive and robust technique that allows us to identify bacterial endospores, such as anthrax, in real time,” Scully said.