For five straight days in February, 15 Princeton undergraduates competed in a grueling applied math contest. When the dust had settled, one of the teams had taken top honors. Jeff Tang ’09, a member of the top team, reports:

The Consortium for Mathematics and Its Applications sponsors the premier undergraduate math-modeling contest, with more than a thousand teams participating from twelve countries. Students work in teams of three, each submitting papers that address one of three real-world engineering problems.

The math-modeling competition blends mathematics with engineering. Good teams must have a mixture of mathematical creativity, writing ability, and computer programming skills. This year’s problems were particularly challenging:

building mathematical models to design fair congressional districts in New York state;
devising and comparing procedures for boarding and deboarding planes with whose carrying capacity ranged from from 85 to 800 people;
modeling the policy issues associated with improving the efficiency of the U.S. kidney organ transplantation network.

My team – which included fellow sophomores Jingyuan Wu and Yue Yang – submitted a paper on the kidney transplant problem. 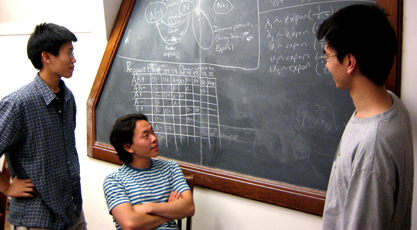 Each member of our team brought different skill sets (Jingyuan Wu and I major in operations research and financial engineering; our teammate Yue Yang majors in computer science). We had to use a variety of methods and had to dig into what we collectively have learned in our Princeton classes. One component of the problem was to consider a market for kidney transplants, which relied on our economics classes, and another was to consider psychological factors influencing potential donors, which required us to build linear programs and probability models. 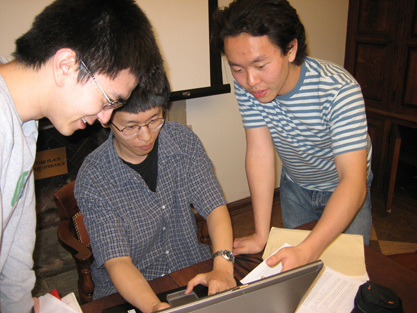 Our strategy paid off. We received Outstanding award status, given to the top four papers out of the 273 submissions to the kidney problem during this international competition. Our solution also received the INFORMS award, which is an additional prize given to only one of the teams given Outstanding status. 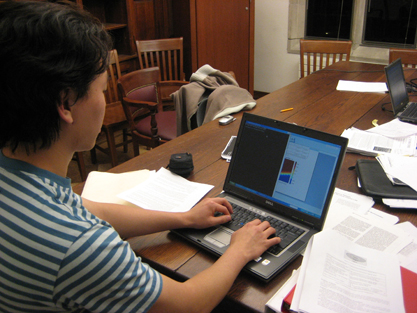 A second team of sophomores, Taotao Liu, Aaron Potechin, and Nathan Savir, received Honorable Mention for their solution to the airplane boarding problem.

Although the competition has been around for 24 years, this was Princeton’s first year to enter. Alex Lishkov, a fellow mathematics enthusiast, and I decided that forming a team would be a great experience. “The competition looked interesting, and we knew the interest would be high, but we weren’t expecting to field five teams,” Lishkov recalls.

All told, 15 Princeton undergraduates participated in the competition, which lasted for five straight days, from Thursday, Feb. 8 to Monday, Feb. 12.

“Time played an important role for our team,” recalls Nathan Savir. “The contest took more time than I expected; we weren’t prepared for the extensive background research required before formulating our models, and the modeling itself was quite time-consuming as well.”

Add in the numerous classes, problem sets, and jobs that all the team members still had to do, and it’s remarkable that the Princeton teams performed so well despite time constraints and their lack of experience.

This year’s competition was as exciting as it was tough. Teams are already forming for next year. To learn more about the competition, visit http://www.comap.com/undergraduate/contests/.