Flexible electronics being developed in Sigurd Wagner’s lab are supple not only in form, but in function. The pliant systems-first developed for bendable video displays-have applications in brain injury research, tissue engineering and the development of next-generation prosthetics. 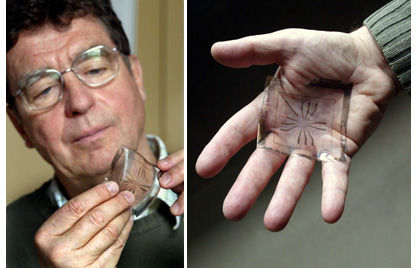 Wagner and former Princeton postdoctoral researcher Stephanie Lacour, now at the University of Cambridge in England, are part of a National Institutes of Health-funded project to develop membranes embedded with flexible arrays of microelectrodes for brain research.

Able to withstand physical shock, the flexible electrodes provide a before and after picture of cellular activity when neurons undergo simulated injuries in the lab. Currently, researchers have only the crude measure of whether cells die during the test.

“In terms of traumatic brain injury, there can be a lot of functional damage to the brain in other ways than just killing a cell,” said Barclay Morrison III, an assistant biomedical engineering professor at Columbia University who heads the project. “Neurons can still be alive, but not properly firing,” which leads to problems ranging from comas to epilepsy.

Flexible microelectrodes also may one day be used to stimulate tissues being grown in the lab-for instance, training heart tissue to contract. Eventually, they may be incorporated in electronic “skin” on prosthetic devices, able to communicate with the brain like any natural human limb.

“A basic problem with the interface between today’s electronics and living tissue is that electronics are hard and tissues are soft,” Wagner said. The ultimate goal is to design softer devices that move with living tissue, maintaining a connection without damaging human cells.