There are medical benefits to be found at the intersection of music and technology, according to Perry Cook. He should know-he lives there.

The jointly appointed professor of computer science and music is part of a National Institutes of Health-funded project to develop a quick and inexpensive screening technique for stroke. With Princeton Soundlab graduate student Matt Hoffman, Cook is developing methods to amplify audio signals obtained from ultrasounds of the carotid artery. This may provide an inexpensive and effective way to catch potentially lethal plaque build-up before it causes stroke. 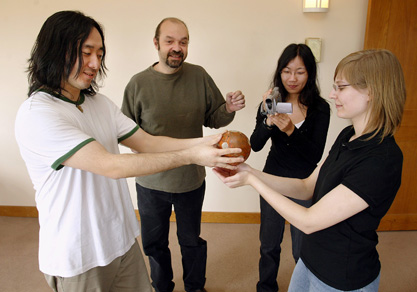 A prolific inventor of interactive musical devices, Cook also is part of a collaboration between the University of British Columbia and Princeton to develop assistive technologies for people with aphasia-an impaired ability to use or understand words that is often caused by stroke. The project was brought to Princeton by former dean of engineering Maria Klawe. Now the president of Harvey Mudd College, Klawe helped found the project in honor of her close friend, the late Dr. Anita Borg, who acquired aphasia as a result of a brain tumor.

Cook and his colleagues are adding sound and possibly music to existing assistive computer devices, which feature visual icons and symbols to help users convey information. For example, the sound of a dog bark could serve as a reminder to buy dog food on an electronic shopping list.

“Music is about communicating and aphasia is about the loss of language and communication abilities,” Cook said. “I’m hoping to use my experience with music, sound and technology to restore part of this loss.”