Engineer Ron Weiss’ knowledge of circuits and biologist Ihor Lemischka’s expertise in stem cells are a potent combination-one that may lead to medical breakthroughs for diabetes and spinal cord injuries.

For over three years, the duo have been working in the emerging field of synthetic biology to program genetic circuits into stem cells, thereby instructing them to make tissues by design. Stem cells have the unique ability to become any specialized tissue in the body while simultaneously replenishing their own population. 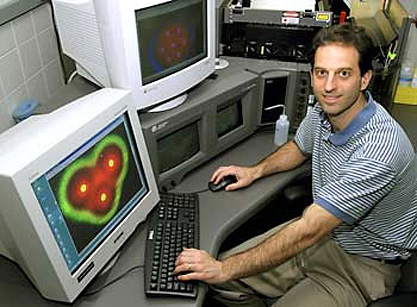 A current project is to design a self-regulating system that instructs mouse stem cells to become insulin-producing pancreatic beta cells, which are mistakenly destroyed by the body’s own immune response in Type I diabetes. The ultimate goal is to transplant these engineered stem cells into a human pancreas, restoring the patient’s natural insulin production. The engineered stem cells would also monitor the number of beta cells and make more when necessary.

In another project, engineered stem cells would be instructed to differentiate into other cell types such as muscle, bone, or neurons as needed. This work could potentially be used for tissue regeneration applications such as spinal cord injury repair.

“This is not a simple process,” said Weiss, associate professor of electrical engineering. “You can’t just design pathways-you have to anticipate what the cell will do to react to a certain control mechanism. It would be very hard to do this research without someone who understands the ins and outs of development.”

The two agree that this collaboration between biology and engineering is only the beginning of what’s to come. They have shared this belief with students through the International Genetically Engineered Machines (iGEM) summer program. This year, Princeton’s iGEM team ranked third in the world in an international competition to engineer biological systems based on their work with beta cells.

“In the larger sense, biology is impacted upon by engineering disciplines a lot,” Lemischka said. “Biology ultimately will look a lot more like engineering than like physics or chemistry. The main difference between the two fields is that engineers build stuff by design while in biology stuff is built through evolution.”

Craig Arnold, assistant professor of mechanical and aerospace engineering, assists Weiss and Lemischka by using a laser to create a specific pattern of stem cells that is then allowed to divide. Weiss also is part of an ongoing collaboration with Frances Arnold at the California Institute of Technology to engineer “good” bacteria that detect and destroy “bad” bacteria.