Summer thunderstorms become much more fierce when they collide with a city than they would otherwise be in the open countryside, according to research led by Princeton engineers.

Alexandros Ntelekos and James Smith of Princeton University’s School of Engineering and Applied Science based their conclusion on computer models and detailed observations of an extreme thunderstorm that hit Baltimore in July 2004. 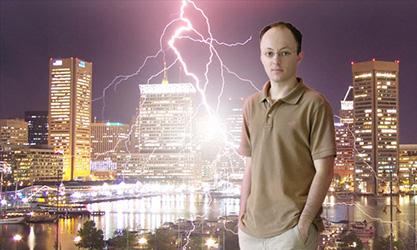 Their modeling suggests that the city of Baltimore experienced about 30 percent more rainfall than the region it occupies would have experienced had there been no buildings where the city now sits.

While thunderstorms are thought of as being purely forces of nature, the Princeton research suggests that man’s built environment can radically alter a storm’s life cycle.

A storm of the intensity of the 2004 event in Baltimore is extremely rare, occurring only once every 200 years or so. However, climate change is expected to make such events more frequent, according to the fourth assessment report of the Intergovernmental Panel on Climate Change (IPCC).

“Precipitation events like gully-washing rainstorms are expected to increase in intensity as the world warms due to the buildup of greenhouse gases,” said Michael Oppenheimer, a lead author on the IPCC report and the Albert G. Milbank Professor of Geosciences and International Affairs at Princeton. “This is just the sort of research that combines science, engineering and social response that may allow us to better cope with the future, warmer climate. I hope it will also serve as a warning about the complexity of adaptation and, therefore, as a goad to policymakers to act more urgently to stabilize the climate.”

In an Aug. 8 intense storm in New York City — which played havoc with subways, street traffic and airports — about three inches of rain fell in one hour. In the 2004 storm that the researchers studied, about six inches fell within two hours.

“The storm that occurred in New York City is an example of the sort of event that we expect more of in the future,” said Oppenheimer. “The disruptive effect was quite obvious.”

Observational data show that, during the 2004 storm, parts of Baltimore experienced as many lightning strikes in the space of two hours as they normally receive during the course of a year. 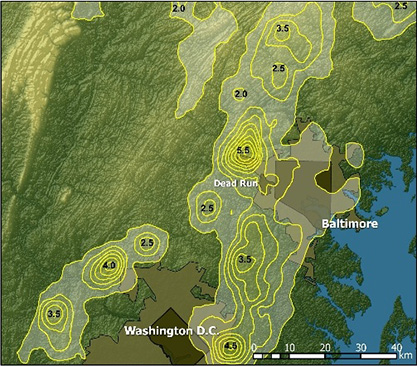 Much of the lightning during the 2004 storm wrapped around the western edges of Baltimore and Washington, D.C., to the south. “It’s as if all of a sudden the lightning can ‘feel’ the city,” said Nteleko, a Princeton graduate student in civil and environmental engineering who is a fellow with the Woodrow Wilson School’s Science, Technology and Environmental Policy Program.

The interaction between storm and city has serious consequences for urbanites as well as policymakers.

“This means that warm-season thunderstorm systems will probably increasingly lead to more flash flooding, which can be very dangerous,” said Smith, a professor of civil and environmental engineering at Princeton.

Hydrologists have observed evidence in the past that urban environments alter the behavior of storms. But they have mostly noted average increases in rainfall over long periods of time. Until now, they have not made observations of specific extreme storms because they lacked the right tools to do so.

The National Science Foundation-funded research by Ntelekos and Smith pieced together many different bits of observational information on lightning strikes, rainfall, clouds and aerosols — which they combined with analyses based on computer models of the atmosphere.

The combined data yielded surprising conclusions. For example, neighboring cities also can affect the behavior of a storm. The Ntelekos-Smith research showed that the 2004 storm over Baltimore was partially affected by the neighboring urban environment of Washington D.C., as air from the south became more turbulent when passing over it. This made the air mass particularly ripe for a storm by the time it reached Baltimore.

The scientific consensus so far has been that, during a storm, greater rainfall occurs on the downwind part of the city than on the upwind side.

However, the researchers found that during the 2004 Baltimore storm, the western part of the city — not the downwind, northern part — was hit harder by rainfall and thus extreme flooding, according to Ntelekos.

“Previous studies basically came from cities where the terrain was simple, where you had a town in the middle of nothing — no mountains, no water,” he said. “But most large cities are close to either mountains or water as well as being close to other cities. So we have to understand how extreme thunderstorms behave over complex terrains.”

Exactly how does the urban environment have the potential to alter the evolution of thunderstorms? The researchers described three mechanisms:

Urban heat islands: Cities produce heat and are often 2 to 5 degrees Fahrenheit hotter than the surrounding environment. In milder storms, this “heat island” can provide fuel for a modest thunderstorm. But in their study of the 2004 thunderstorm, Ntelekos and Smith found that the heat island had little effect because high winds leveled temperatures.

Urban canopies: While forests have tree canopies, cities have building canopies. The height and placement of buildings alters a storm’s low-level wind field, a key ingredient in its behavior. The tall buildings increase wind drag on the city, resulting in vertical velocities – essentially a boiling action – that can enhance rainfall. The urban canopy had a large effect during the 2004 storm, the researchers found, which was exacerbated all the more by the presence of the Chesapeake Bay to the east.

Urban aerosols: These are essentially minuscule particles in the atmosphere that are at elevated levels in urban environments due to industrial and automobile emissions. Traditionally, researchers have thought that air pollution tends to suppress precipitation. But Ntelekos and Smith believe their research points to the possibility that urban aerosols actually increase rainfall.

Ntelekos plans to build on his Baltimore research in a more detailed study of the effect of aerosols on thunderstorms in New York City. That research will be a test bed for laser-based sensor technologies being developed by Princeton’s Mid-Infrared Technologies for Health and the Environment, a National Science Foundation engineering research center at the University charged with developing next-generation sensor technology for environmental monitoring, medical diagnostics and national security.

Ntelekos and Smith are co-authors with Witold Krajewski of the University of Iowa of a recent paper in the Journal of Hydrometeorology which describes links between summer thunderstorms and flash flooding in the Baltimore metropolitan region. Ntelekos and Smith also have written a paper that describes the findings of the 2004 storm over Baltimore and which currently is under review by the Water Resources Research journal published by the American Geophysical Union. Their co-authors on this paper are Krajewski and Radoslaw Goska of the University of Iowa; Mary Lynn Baeck of Princeton; and Andrew J. Miller of the University of Maryland-Baltimore County.