Deepak Sukh predicts his American-born children will one day work in India. He tells them that if the economy of the world’s largest democracy blossoms as predicted in coming decades, opportunities for savvy entrepreneurs will abound.

“I’ve told both of my kids, that during their careers, India is going to be a desired business destination,” said Sukh, a corporate leadership consultant, who lives in Randolph, N.J. 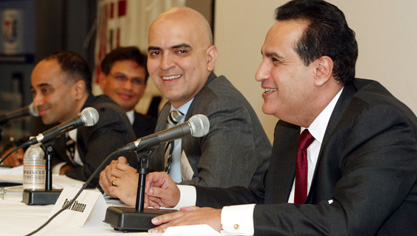 With that in mind, Sukh and his 15-year-old son, Chetin, attended an Oct. 8 networking event titled “Entrepreneurship in the US-India Corridor,” which was hosted by Princeton’s Keller Center for Innovation in Engineering Education.

The event, which was co-sponsored by the MIT Club of Princeton and The Indus Entrepreneurs (TiE) of New Jersey and Philadelphia, drew about 200 aspiring entrepreneurs to the Princeton’s Frist Campus Center. The event coincided with the one-year anniversary of the New Jersey TiE chapter’s founding.

Guest lecturers and an expert panel discussed the opportunities and challenges of doing business in India, offering advice on what sectors of the Indian economy are set to grow in coming years and suggestions on breaking into these emerging markets.

In his opening remarks, Bob Monsour, the associate director of the Keller Center, noted the strong ties that exist between India and the United States. Over 76,000 Indian students attend American universities, he said, and 2.5 million Americans trace their ancestry to India.

“Needless to say, the two countries have a lot to talk about,” Monsour told the group. “And with the job-creating economic engine that is defined by the word ‘entrepreneurship,’ I look forward to a very interesting evening.” 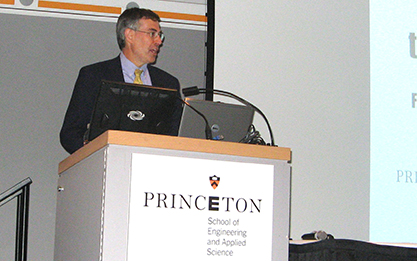 In his speech, Holt echoed Monsour’s optimism about the economic opportunities in India, and said that he sees India as the United States’ major economic and cultural relationship in coming decades. “The foundations are there for this partnership,” he said. “India’s investment in education and research has laid the foundation for economic growth.”

Morse provided the night’s comic relief. The gregarious entrepreneurship expert from MIT gave the attendees a pep talk, encouraging them to calculate the risks of new business ventures, then take the plunge. He also coached them to prepare for failure, illustrating the point with an ill-fated venture of his own, a short-lived business he helped start in the Boston.

“We went splat on the windshield of life,” he said. “Failure is part of the process. I wouldn’t have been given the directorship of the [MIT] center, if I hadn’t gone splat. The average pH of an entrepreneur’s stomach is two standard deviations from the norm.”

But there are benefits to owning your own business. “The thing that’s comforting is that you may have to work 24 hours a day, but you get to choose which 24.”

Morse also outlined some of the challenges of India’s growing economy, including the environmental risks presented by growing demands for energy and water, resources that are increasingly scarce. 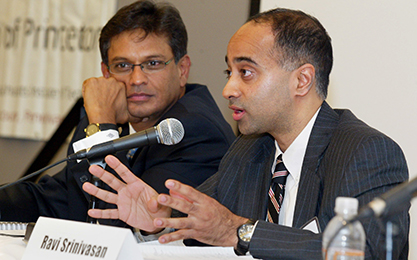 He admonished anyone who’s doing business in India to inquire about the environmental footprint of their ventures; for instance, by asking if factories are getting their power from coal-fired plants equipped with modern carbon scrubbers that reduce the emissions of green house gases.

During his presentation, Singh discussed niche sectors in the Indian economy that enterprising business-types might consider exploring. He encouraged the attendees to think of India as a place to sell products and services, not just as a source for cheap labor and manufacturing.

The population of India is predicted to grow to 1.4 billion people by 2025, he said, and 60 percent of those people (650 million) are expected to be middle-class consumers. They will comprise a huge market for financial services, medical care, medicines, power, telecommunications and infrastructure.

This is why Sukh, who is now a U.S. citizen, sees a professional future for his son in India – and for himself. He attended the conference to make connections with other people who seen his native country as a land of opportunity. Prior to starting his own business coaching business executives on leadership, he was the chief executive officer of a business venture between AT&T and TATA, a large Indian conglomerate.

He pointed out that India and the United States are both highly diverse democracies and said the countries’ shared perspective provides a strong foundation for collaboration. He acknowledged, however, that there will cultural barriers to overcome.

“Both countries have a lot to offer each other,” he said. “We just have to overcome our preconceived notions. Some people still have this image of India as the land of snakes and tigers. The problems are not going to be on the technical side; they will be on the human side.”