In labs, bacterial colonies usually grow in streaks in petri dishes, but until now no one has known how the colonies organize themselves in more realistic three-dimensional (3-D) environments, such as tissues and gels in our bodies or soils and sediments in the environment. This knowledge could be critical for advancing medical and environmental research.

Now, a Princeton team has invented a way to observe bacteria in 3-D environments. They found that as the bacteria grow, their colonies consistently form fascinating rough shapes resembling a branching head of broccoli, much more intricate than forms typically seen in a flat dish.

“Ever since bacteria were discovered over 300 years ago, most lab research has studied them in test tubes or on petri dishes,” said Sujit Datta, an assistant professor of chemical and biological engineering at Princeton and the study’s senior author. This was a result of practical limits rather than a lack of curiosity. “If you try to watch bacteria grow in tissues or in soils, those are opaque, and you can’t actually see what the colony is doing. That has really been the challenge.”

Datta’s research team uncovered this behavior using a breakthrough experimental setup that allows them to make unprecedented observations of bacterial colonies in their natural, three-dimensional state. Unexpectedly, the team found that the wild colonies’ growth consistently resembles other natural phenomena like the growth of crystals or the spread of frost on a windowpane.

“These kinds of rough, branchy shapes are ubiquitous in nature, but typically in the context of growing or agglomerating nonliving systems,” said Datta. “What we found is that growing in 3-D, bacterial colonies exhibit a very similar process despite the fact that these are collectives of living organisms.”

The researchers presented this new description of how bacterial colonies grow in three dimensions in a paper published Oct. 18 in the Proceedings of the National Academy of Sciences. Datta and his co-researchers hope the findings will assist with an array of research that deals with bacterial growth, from the development of more effective antimicrobials to pharmaceutical, medical and environmental research, as well as processes that harness bacteria for industrial use. 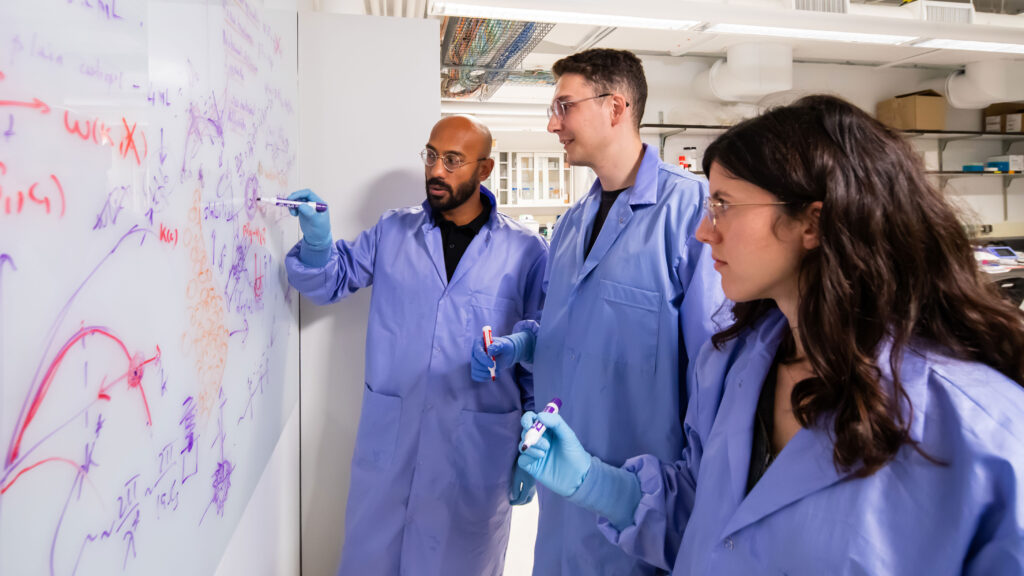 “At a fundamental level, we’re excited that this work reveals surprising connections between the development of form and function in biological systems and studies of inanimate growth processes in materials science and statistical physics. But also, we think that this new view of when and where cells are growing in 3-D will be of interest to anyone interested in bacterial growth, such as in environmental, industrial and biomedical applications,” Datta said.

For several years, Datta’s research team has been developing a system that allows them to analyze phenomena that are usually cloaked in opaque settings, such as fluid flowing through soils. The team uses specially designed hydrogels, water-absorbent polymers similar to those in jello and contact lenses, as matrices to support bacterial growth in 3-D. Unlike those common versions of hydrogels, Datta’s materials are made up of extremely tiny balls of hydrogel that are easily deformed by the bacteria, allow for the free passage of oxygen and nutrients that support bacterial growth, and are transparent to light.

“It’s like a ball pit where each ball is an individual hydrogel. They’re microscopic, so you can’t really see them,” Datta said. The research team calibrated the hydrogel’s makeup to mimic the structure of soil or tissue. The hydrogel is strong enough to support the growing bacterial colony without presenting enough resistance to constrain the growth.

“As the bacterial colonies grow in the hydrogel matrix, they can easily rearrange the balls around them so they are not trapped,” he said. “It’s like plunging your arm into the ball pit. If you drag it through, the balls rearrange themselves around your arm.”

The researchers performed experiments with four different species of bacteria (including one that helps to generate kombucha’s tart taste) to see how they grew in three dimensions.

“We changed cell types, nutrient conditions, hydrogel properties,” Datta said. The researchers saw the same, rough-edged growth patterns in each case. “We systematically changed all those parameters, but this appears to be a generic phenomenon.”

Datta said two factors seemed to cause the broccoli-shaped growth on a colony’s surface. First, bacteria with access to high levels of nutrients or oxygen will grow and reproduce faster than ones in a less abundant environment. Even the most uniform environments have some uneven density of nutrients, and these variations cause spots in the colony’s surface to surge ahead or fall behind. Repeated in three dimensions, this causes the bacterial colony to form bumps and nodules as some subgroups of bacteria grow more quickly than their neighbors.

Second, the researchers observed that in three-dimensional growth, only the bacteria close to the colony’s surface grew and divided. The bacteria crammed into the center of the colony seemed to lapse into a dormant state. Because the bacteria on the inside were not growing and dividing, the outer surface was not subjected to pressure that would cause it to expand evenly. Instead, its expansion is primarily driven by growth along the very edge of the colony. And the growth along the edge is subject to nutrient variations that eventually result in bumpy, uneven growth.

“If the growth was uniform, and there was no difference between the bacteria inside the colony and those on the periphery, it would be like filling a balloon, said Alejandro Martinez-Calvo, a postdoctoral researcher at Princeton and the paper’s first author. “The pressure from the inside would fill in any perturbations on the periphery.”

To explain why this pressure was not present, the researchers added a fluorescent tag to proteins that become active in cells when the bacteria grow. The fluorescent protein lights up when bacteria are active and remains dark when they are not. Observing the colonies, the researchers saw that bacteria on the colony’s edge were bright green, while the core remained dark.

“The colony essentially self-organizes into a core and a shell that behave in very different ways,” Datta said.

Datta said the theory is that the bacteria on the colony’s edges scoop up most of the nutrients and oxygen, leaving little for the inside bacteria.

“We think they are going dormant because they are starved,” Datta said, although he cautioned that further research was needed to explore this.

Datta said the experiments and mathematical models used by the researchers found that there was an upper limit to the bumps that formed on the colony surfaces. The bumpy surface is a result of random variations in the oxygen and nutrients in the environment, but the randomness tends to even out in certain limits.

“The roughness has an upper limit of how large it can grow — the floret size, if we are comparing it to broccoli,” he said. “We were able to predict that from the math, and it seems to be an inevitable feature of large colonies growing in 3-D.”

Because the bacterial growth tended to follow a similar pattern as crystal growth and other well-studied phenomena of inanimate materials, Datta said the researchers were able to adapt standard mathematical models to reflect the bacterial growth. He said future research will likely focus on better understanding the mechanisms behind the growth, the implications of rough growth shapes for colony functioning, and applying these lessons to other areas of interest.

“Ultimately, this work gives us more tools to understand, and eventually control, how bacteria grow in nature,” he said.

The article, Morphological instability and roughening of growing 3D bacterial colonies, was published online Oct. 18 in the Proceedings of the National Academy of Sciences. Besides Datta and Martinez-Calvo, authors included Ned Wingreen, the Howard A. Prior Professor in the Life Sciences at Princeton; R. Konane Bay, Tapomoy Bhattacharjee, Anna M. Hancock and Hao Nghi Luu, of Princeton University. Support for the project was provided in part by the National Science Foundation, the New Jersey Health Foundation, the Lidow Independent Work/Senior Thesis Fund, the Human Frontier Science Program, the National Institutes of Health, the Eric and Wendy Schmidt Transformative Technology Fund, and the Pew Biomedical Scholars Program. Some bacteria for the experiments were supplied by the Princeton labs of Robert Austin, professor of physics, Bonnie Bassler, the Squibb Professor in Molecular Biology and chair of the Department of Molecular Biology, and Zemer Gitai, the Edwin Grant Conklin Professor of Biology.