Princeton researchers devote years of meticulous work to producing scientific and engineering discoveries, but those eureka moments are just the beginning for technologies destined for the marketplace.

To help University researchers and entrepreneurs navigate the process of turning discoveries into products, the Keller Center for Innovation in Engineering Education hosted a panel discussion on Nov. 19 titled Commercialization of University Technology: Perspectives of Princeton Participants. 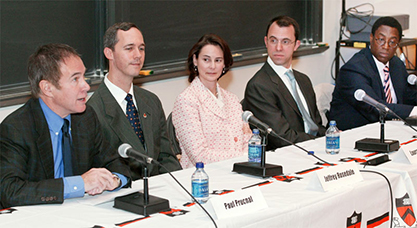 The panel included a scientist, a patent attorney, a successful entrepreneur and others with experience in university technology transfer – the means by which researchers license scientific and engineering research findings and inventions to companies. The panelists spoke to a gathering of researchers, students and entrepreneurs in Friend Center Auditorium.

“It’s not an easy process; it’s not a simple process,” said Bob Monsour, the Keller Center’s associate director for external affairs, in his opening remarks. “But it’s an important process and it relies on people.”

Professor Ed Zschau, who teaches the course High-Tech Entrepreneurship and served as panel moderator, echoed Monsour’s emphasis on the importance of technology transfer. He said the mission of Princeton and other universities is to “create new knowledge and share new knowledge” and that the panelists could offer insight applying that knowledge for commercial uses.

The first panelist to speak was Paul Prucnal, a Princeton electrical engineering professor, whose research focuses on using fiber optics to create ultrafast communication networks and measurement tools. Prucnal offered a researcher’s perspective on the process of licensing intellectual property.

He said it can be difficult to balance the demand for high-quality fundamental research with developing ways to apply that research for commercial use. His solution is to “do several things at once.”

In addition to his basic research, he works with the University’s technology transfer office to apply for patents and works with companies and the military on applying his expertise and findings. “It vitalizes the work,” he said. 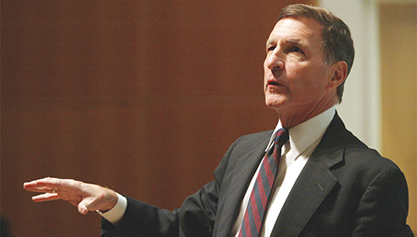 Another panelist, Jeffrey Rosedale, a Princeton engineering alumnus and patent attorney for the law firm Woodcock Washburn, has worked with Princeton scientists and engineers to protect the University’s legal rights to their discoveries. He said companies are far more likely to license a technology that has been patented, because it is legally protected from unauthorized use.

As an example, he noted a nanotechnology for scanning DNA that was developed by engineering professor, Stephen Chou, and recently licensed by a Philadelphia company. The project shows promise for analyzing the human genome for an individual for $100 or less, a remarkable drop in the price of such tests which now cost thousands of dollars.

“Without the patents, they never would have gotten to where they are, because no one would want to take the risk,” Rosedale said. “If you want to see your discoveries get out of the lab and into the marketplace,” he said, “you need to have a passion to see it in the hands of the public and you need to talk with the University’s Office of Technology Licensing.”

John Lettow, also a Princeton alumus, provided the panel’s business perspective. He co-founded Vorbeck Materials, a manufacturer and supplier of graphene, a nanomaterial composed of carbon sheets that are only one atom thick. The fundamental technology was developed in Princeton’s chemical engineering department. The material has shown promise for uses in a broad range of fields, especially for the development of ultra-high-speed quantum computers.

Lettow also encouraged researchers to leverage University support for technology transfer. Bringing innovations to the market requires a team approach, he said, one that includes professors, patent attorneys, the technology transfer office and the entrepreneurs.

He also said it’s important for everyone on the team to understand their roles and that entrepreneurs approach emerging technologies with an appreciation for the science, but also an eye for the marketplace. “You’re not the primary researcher,” he said. “Your role is to get a product that sells.”

The panel included two other Princeton alumni: Laura Schoppe, the president of Fuentek, a firm that manages intellectual property and technologies, and Ralph Taylor-Smith, a partner at Battelle Ventures, a venture-capital firm that funds early stage technology companies.

The event was part of the Princeton-Jumpstart Lecture Series on Technology Entrepreneurship and was also sponsored by the Jumpstart New Jersey Angel Network and the law firm Morgan Lewis & Bockius.