Princeton’s Class of 2009 included 173 students graduating with bachelor of science in engineering degrees, a group that made contributions not only to science and engineering research, but also theater, dance, visual arts, public policy, community service and athletics.

The School of Engineering and Applied Science recognized just some of the outstanding achievements at Class Day ceremonies June 1.

Agrawal worked with Professor Claire Gmachl to design and build a laser-based system for detecting trace gases and presented the results at a peer-reviewed conference. “This was a first in all optical research, requiring a path quite orthogonal to conventional wisdom, which ultimately led to success, thanks to Abhishek’s sharp intellect and persistence,” Gmachl said. He will work for the next two years for Microsoft, and has been accepted to the Harvard Business School Class of 2013.

Baldassano conducted several high-level independent research projects, including work with Professor Sergio Verdu on quantum information theory. Verdu said Baldassano showed “unusual independence and has contributed to the advancement of knowledge at the level of a Ph.D. student.” He also worked with Professor Naomi Leonard to study how a group of robots could perform collective foraging as animals do. He was active with the student group Princeton Autonomous Vehicle Engineering and helped the group win numerous honors in competitions. He will pursue a doctorate at Stanford.

With the Student Volunteers Council, Doyle managed a group of students who volunteered weekly at Anchor House in Trenton, a shelter for runaway, homeless and abused youth. He also helped organize a Community Action program for incoming freshmen and spent two summers as a service intern for Joy of Sports, an organization that uses sports to lead at-risk youth to a safer path.

As a rugby player, Erwin was named to the New Jersey All-State team every year and was most valuable player. He was captain of the Princeton team. Erwin conducted an independent study of the shift from the use of structural steel to high-strength concrete in constructing the world’s tallest buildings. He hopes to join a nationally competitive rugby club while teaching math at a charter school and applying to graduate school.

Hui participated in an array of research and service projects, including Engineering Projects in Community Service and Engineers Without Borders. He also was part of a team of students who prepared models for a museum exhibit on Felix Candela. His thesis addressed a method for combating global warming by storing carbon underground. Professor Catherine Peters called it the best senior thesis she has advised in 15 years at Princeton. “The approach is novel, the insights are deep and the conclusions are important.” Hui will work as an engineer for Environ Corporation. 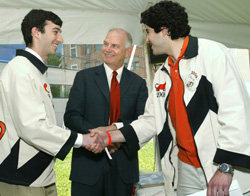 As part of a broad record of academic excellence, Isakowitz worked with classmates on an independent project to design part of a satellite that would search for Earth-like planets in other solar systems. In one class, he was noted for his proposed design of a spacecraft to scan for hazardous asteroids that are hard to detect from Earth. Next year, Isakowitz will work for the Personal Spaceflight Federation, the industry association of businesses and organizations working to make commercial human spaceflight a reality.

Johns conducted a study of a new method for using lasers to measure trace gases in the atmosphere, research that professor Kelly Caylor said clearly demonstrates the advantages of the method over previous techniques. She will serve in the U.S. Army as a second lieutenant.

Khan conducted computer simulations of polymer compounds in salt solutions, which could be used in developing new materials for drug delivery and sensors. He also earned a certificate in engineering physics and will pursue a Ph.D. at the Massachusetts Institute of Technology. 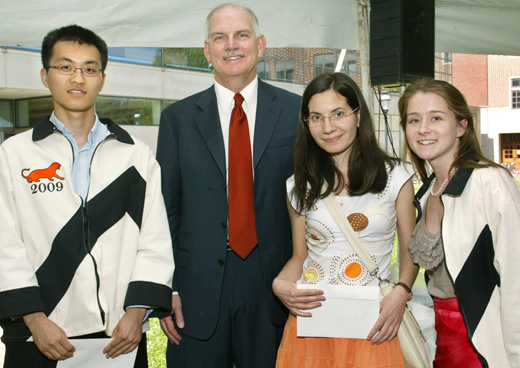 Kwak worked with Assistant Professor Celeste Nelson to study the early development of lung tissue, creating 3D images of air pathways in chicken lungs. Nelson described his work as a “tour de force” and said that she has never seen an undergraduate as hard-working and mature. Kwak is preparing to submit the work to a leading biology journal and plans to pursue a Ph.D. in the joint Harvard-MIT Health Sciences and Technology program.

Combining her interests in engineering and dance, she used motion capture technology and mathematical techniques to analyze different styles of dance with the goal of creating a tool for choreographers and interpreting the aesthetics of dance. Professor Naomi Leonard called LaViers’ work the most creative thesis she has ever seen and a “deep, original piece of scholarly work.” LaViers will pursue a Ph.D. at the Georgia Institute of Technology.

Advised by Professor Warren Powell, Negoescu optimized methods for screening millions of chemical compounds to find a drug for Ewing’s sarcoma, a type of pediatric bone cancer. She reduced the computer time needed to analyze a single molecule from 15 hours to 3 minutes. Powell said this achievement, which may be patented, will find uses well beyond drug discovery. Negoescu will pursue a Ph.D. in Management Science and Engineering at Stanford.

O’Shea earned four certificates in addition to his major: applied and computational math; applications of computing; robotics and intelligent systems; and neuroscience. He also was president of the Tau Beta Pi honor society, which runs tours of the engineering quadrangle. Despite these responsibilities, Associate Dean Peter Bogucki said that when he sent an email asking O’Shea to organize something, he received a typical response: ” Absolutely. I can drop by later this afternoon if you’d like to briefly fill me in on what I need to do to make this happen.” O’Shea will pursue a Ph.D. in neuroscience at Stanford University.

Professor David Billington called Puryear’s study of the infrastructure built by the U.S. military in Vietnam an “extraordinary thesis” while Professor George Scherer said it was “thought-provoking and valuable.” Puryear will take up a commission in the U.S. Army.

Weissinger participated in multiple service projects and activities, including working in Ethiopia with Engineers Without Borders and taking a leading role in initiatives with Isles Inc., a community development and environmental non-profit organization in Trenton, N.J. She was a leader in organizing and coordinating projects and made presentations of results to outside groups such as the New Jersey Smart Growth Alliance.