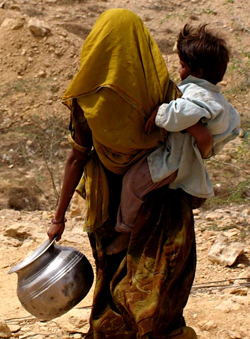 A Pakistani garbage dump seems like an unlikely place to find a solution to extreme poverty. But then again, the group of students from Princeton and Rutgers universities who plan to convert garbage into hope is an unlikely team.

Undergraduate and graduate students in chemistry, finance, molecular biology, sociology and engineering constitute Em[Power], a diverse crew that has developed a business plan to help people living in a landfill near the city of Karachi, Pakistan, to use energy generated from garbage to improve their lives.

“We’ve developed a model for utilizing organic waste to provide landfill communities with energy that can support new businesses and social services,” said Princeton rising junior Faaez Ul Haq, a computer science major working on the project. “It’s a business plan that brings together ideas from a range of areas, so everyone on the team contributed their particular skills.”

The plan, developed through courses offered by Princeton’s Keller Center for Innovation in Engineering Education, calls for the landfill residents to stop burning perishable garbage from the dump, a method they currently use to unearth precious metals and other recyclable goods.

Instead the garbage would be processed in an inexpensive system that uses microorganisms to convert the organic waste into methane gas. The process would generate fertilizer for agriculture and the gas could be burned to generate electricity — hence the brackets in the group’s name to reflect how the “power” will “empower” the landfill residents.

“The technology has been in use for a long time,” said Dalia Nahol, a rising senior at Princeton majoring in sociology and pursuing a certificate in environmental studies. “The real innovation is understanding the situation that these people live in and how a system could be put in place to help them.”

In addition to Ul Haq and Nahol, the Em[Power] team includes recent Princeton graduates Jacob Hiller, a chemistry major, and Michael Smith, a molecular biology major, and graduate students Fahad Shams, from the Bendheim Center for Finance, Tiffany Tong, from the Department of Electrical Engineering, and Ryan Integlia, a graduate student in electrical engineering at Rutgers.

An idea from tons of waste

The concept originated in 2006 from discussions between Integlia and Salman Khan, a Pakistani graduate student at Rutgers.

A year earlier, Khan had participated in an effort to teach information technology skills to residents of the landfill, called Kachra Kundi, in hopes that they might obtain employment. He described the situation to Integlia, whose grandmother had once shown him a landfill slum in Mexico as a way to encourage him to help people in need, and Integlia and Khan set out to find a solution.

About 2,000 people live in a town of makeshift huts on the Kachra Kundi landfill, which receives about 3,000 tons of urban waste from Karachi every day. Integlia recognized that the refuse that the dump residents burn away holds potential as a resource they could use to improve their lot in life.

“They live in such desperate conditions,” Integlia said, “and we realized that they were wasting this organic matter that might offer them a chance for something better.”

The idea languished for a time after Kahn graduated and returned to Pakistan to work. But then Integlia met Tong when he was taking a class at Princeton under a National Science Foundation program. He described the situation to Tong and they decided to revive the plan to do something about the social and environmental problems at the landfill.

One bright spot at the landfill was a nonprofit foundation that established a school and clinic in 1987 to serve the families who live in the landfill. By teaming up with the foundation, Tong and Integlia figured they could take advantage of an existing community resource with knowledge of how to operate effectively in the area. First, however, they needed a plan.

More students became involved with the project through the entrepreneurship classes sponsored by the Keller Center, and the plan to convert refuse to electricity evolved under the guidance of two visiting professors, John Danner, a business professor at the University of California-Berkeley, and Gordon Bloom, the founder of the Social Entrepreneurship Collaboratory at Stanford and Harvard universities.

A three-phase course of action

In Bloom’s class, the students’ plan evolved to include three stages, based on an analysis of the needs of the landfill residents and regional markets for products and energy.

The first stage relies on the students raising enough funds to purchase the systems to convert the organic waste from the landfill into fertilizer and gas and, in turn, burn the gas to generate electricity. Coupled with other startup materials, the students estimate the cost for this stage at just under $22,000.

The landfill community would initially form a cooperative that uses the fertilizer for growing food and the electricity to power the school and health clinic. The electricity and fertilizer also would serve as the basis for businesses, such as an outdoor cinema and organic farm, and the production of handicrafts and compost to sell to farmers.

In the second stage, as the system grows more robust, the electricity would power the landfill residents’ homes. Eventually, the community could sell excess energy they generate to the regional power grid to help meet the growing energy demands of the nearby city. The profits would in turn flow back into the cooperative and help support the community.

The model has been well received at business plan competitions this spring, helping the students raise about $16,000 toward the purchase of the start-up package for the landfill residents. In addition to the two Princeton-based competitions, the team reached the semifinals of the Dell Social Innovation Competition and also the Massachusetts Institute of Technology Business Plan Competition.

The group also won a Grand Challenge Stories award from the Kauffman Foundation, and Ul Haq was invited on behalf of the group to attend the Presidential Summit on Entrepreneurship held in Washington, D.C., in April.

To ensure the continuity of the project, the students recently incorporated Em[Power] as a nonprofit organization, and several of them plan to continue serving as officers of the organization beyond graduation, they said.

In addition to raising funds, they are working to build connections in the landfill community and formalize their relationship with the nonprofit foundation that runs the clinic and school. The students have travelled to Pakistan to conduct site visits and to organize an art workshop for children living in the landfill.

As the plan to purchase the equipment for the landfill residents comes closer to becoming a reality, the students are tackling new issues, such as how to manage the nonprofit organization they’ve created, determining who will manage the facility in Pakistan on a day-to-day basis and how to expand the concept to other parts of the world.

“We’re convinced this can work,” Nahol said. “We think this model could be used in landfill slums around the world to address garbage overflow that contributes to environmental and health problems and help people escape from a hopeless situation.”