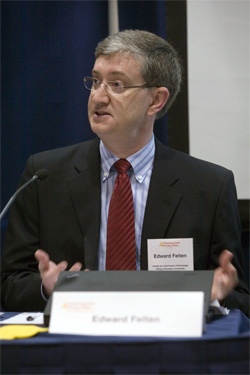 The U.S. Federal Trade Commission (FTC) has named Edward Felten, a Princeton professor of computer science and public affairs, as the agency’s first chief technologist to help guide government policy in an era when technology has a growing influence on businesses and consumers.

Felten is the founding director of the Center for Information Technology Policy (CITP), a Princeton research center that explores the connection between technology, government policy and the social sciences. He will take a leave of absence from the University for his one-year appointment to the trade commission position, which will begin in January.

Felten will advise the agency on evolving technology-related issues of consumer protection, such as online privacy and cybersecurity, and antitrust matters, including tech-industry mergers and anticompetitive behavior.

“The trade commission is heavily involved with issues that touch on technology,” Felten said. “Much of my research and the work of CITP focuses on issues of consumer protection and competitiveness. This is a chance for me to apply what I’ve been studying and see the policy-making process from the inside.”

During Felten’s leave of absence, Margaret Martonosi, also a professor of computer science in Princeton’s School of Engineering and Applied Science, will serve as the acting director of CITP. The center is a joint venture of the engineering school and the Woodrow Wilson School of Public and International Affairs, where Felten also holds a faculty appointment.

Felten is the lead contributor to Freedom to Tinker, an influential technology blog hosted by CITP. In announcing Felten’s appointment, the trade commission noted his expertise in computer security and privacy relating to consumer products, technology law and policy, Internet software, intellectual property policy, and the use of technology to improve government.

“Ed is extraordinarily respected in the technology community, and his background and knowledge make him an outstanding choice to serve as the agency’s first chief technologist,” said FTC Chairman Jon Leibowitz.

“He’s going to add unparalleled expertise on high-technology markets and computer security,” Leibowitz added. “And he also will provide invaluable input into the recommendations we’ll be making soon for online privacy, as well as the enforcement actions we’ll soon bring to protect consumer privacy. We’re thrilled to have him on board.”

Felten has advised the trade commission on Internet privacy and safety issues related to children and on the proposal to create a registry similar to the “Do Not Call” list that would have prevented spammers from sending e-mails to consumers who had opted out. He has served as a policy consultant for the agency since August.