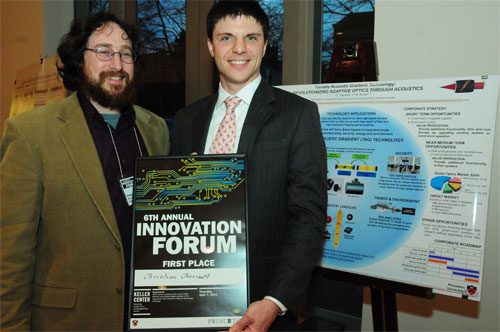 It took three tries, but Christian Theriault finally won the top prize at the Innovation Forum, a competition organized by the Keller Center that showcases Princeton research with potential to be commercialized.

Theriault, who competed at the event twice before, wowed the judges with his pitch about the TAG Lens, a new kind of optical device made of fluid instead of glass that might one day be used for applications ranging from medical imaging to detection of environmental pollution.

“It uses sound to shape light‚Ä¶it’s a revolutionary technology,” said Theriault, a Princeton engineering alumnus, as he extolled for the judges the virtues of the lens developed by Craig Arnold, a professor of mechanical and aerospace engineering.

Theriault and Arnold, who won $25,000 in funding, were one of five finalist teams that competed for $40,000 in prize money on April 7 in the Friend Center Auditorium.

During the event, now in its sixth year, a member of each team delivered a three-minute pitch to a panel of judges that included angel investors, technology company executives and scientists.

SuryaTech, a manufacturing method that may reduce the cost of producing solar cells won the $10,000 second prize. A team lead by James Sturm, a professor of electrical engineering, developed the technology, and Yifie Huang, an electrical engineering graduate student, presented it to the judges.

An invention called “Multifunctional Targeted Imaging Nanoparticles,” which uses ultra-small particles to deliver medical imaging dyes during biomedical research, won the $5,000 third-place prize. In his pitch, Vikram Pansare, a chemical and biological engineering doctoral student, said the nanoparticles could reduce the cost of conducting medical trials. The team that developed the technology was led by Robert Prud’homme, a professor of chemical and biological engineering.

In addition to the Keller Center, the event was sponsored by the Jumpstart New Jersey Angel Network and the law firm, Drinker, Biddle and Reath, in conjunction with Princeton’s Office of Technology Licensing.

The format of the competition was altered this year, so that participants had more interaction with the judges prior to the final pitching event, according to Cornelia Huellstrunk, the Keller Center’s associate director for external affairs.

Early on, the competing teams provided a written draft of their pitches and recorded videos of their presentation at the University Broadcast Center. “This has been wonderful, because the judges have used the materials to provide some valuable input for the participants,” Huellstrunk said. 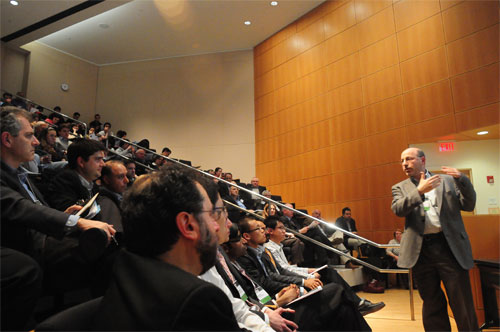 Howard Stone, a professor of mechanical and aerospace engineering who participated in the event for the first time, said he found the process helpful in thinking about how to turn a concept into a business.

Stone’s entry in the competition was a system that would allow scientists to gather data, access safety information and manage other laboratory functions by using voice-activated software.

“It was great,” Stone said of the process, at a poster session held after the pitch event. “I’ve never started a business, so I really valued talking to people who could tell me whether I had a decent idea and how to take it to the next step.”

Mario Casabono, one of the event judges and founder of Casabono Ventures, a New Jersey angel investing firm, said the forum is valuable for the investing community as well.

“It gives investors like myself a glimpse of what is in store for the future,” he said. “We can start tracking potential new products and we may actually find a technology we can commercialize in the near term.”

For Theriault, who graduated from Princeton with undergraduate and master’s degrees in mechanical and aerospace engineering, in 2007 and 2008, respectively, the event was an opportunity to hone his sales pitch for a new company he and Arnold launched earlier this year.

The start-up, called TAG Optics, plans to sell the lenses that Arnold developed and will work with customers to match the devices to their needs. The devices work by applying sound waves to the fluid lens, which changes how light refracts as it passes through the fluid. This allows the lens to change its depth of focus much faster than a traditional glass lens. TAG is short for Tunable Acoustic Gradient Lenses.

Theriault said the new company has one customer already and that the lens could be customized for a wide range of uses, such as laser manufacturing, research and in environmental and medical devices.

Having competed at the Innovation Forum twice before, with teams headed by other Princeton professors, Theriault said he appreciated the ongoing feedback provided this year.

“It was a lot more structured and the judges really spent time providing comments and going back and forth with us,” he said. “It was really about getting us ready to present our business idea in the best way possible.”

“It encapsulated the exciting potential of the intersection between technology and entrepreneurship perfectly,” Mancenon said. “I understand the importance of being able to deliver good speeches and know that I will need to make many such pitches in the future, so it was a valuable event to attend.”