src=”/wp-content/uploads/preventing-main-01.jpg” style=”width: 685px; height: 300px;
” title=”Led by Professor Wole Soboyejo (at left), a Princeton research group created clay pots
that can be made easily from local materials but have been shown to eliminate bacteria and even viruses from
water. (Photo courtesy Wole Soboyejo)” />

Two Princeton engineering groups hope to use technologies based on inexpensive, easily available
materials to give villagers in developing countries access to safe drinking water and help create local
jobs. 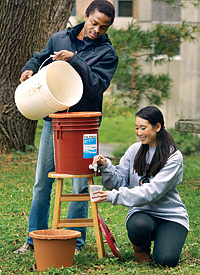 One group led by Wole”>http://www.princeton.edu/mae/people/faculty/soboyejo/”>Wole
Soboyejo, a professor of mechanical”>http://www.princeton.edu/mae/”>mechanical and
aerospace engineering, has developed a ceramic filter made from a clay-and-sawdust mixture to
remove pathogenic bacteria from water. Baking the mixture burns off the sawdust, leaving behind tiny pores
that block microbes.

Currently available filters and treatment methods based on heat, the sun or chlorine are costly,
inaccessible or ineffective. The clay filter developed in Soboyejo’s lab eliminated water-borne
diseases within weeks in a Nigerian village near Abeokuta, where the researchers have helped set up a
factory. They are now transferring the technology to Burkina Faso and Kenya.

“Local people need to generate income from making these filters,” Soboyejo
said. “That’s the key to making this sustainable.”

Other than filter-maintenance, the biggest challenge is educating villagers about sanitation and
the filter’s benefits, he said. “You’d think it’s as easy as telling
people ‘You should use these because it’s good for you,’” Soboyejo
said, “but that’s like telling me to eat salad because it’s good for me.” 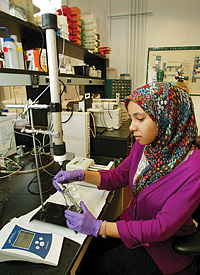 style=”float: right; width: 200px; height: 275px; ” title=”Hagar ElBishlawi, a graduate
student in the lab of Professor Peter Jaffe, is developing a low-cost system for removing excess fluoride
from water, which is endemic in various parts of the world and which can deform bones and teeth. (Photo by
Frank Wojciechowski)” />

Another group led by Peter”>http://www.princeton.edu/cee/people/display_person/?netid=jaffe”>Peter
Jaffe, a professor of civil”>http://www.princeton.edu/cee/”>civil and
environmental engineering, is using apatite, a phosphate compound, to make filters for well water
that remove fluoride, which can deform teeth and bones if ingested in high amounts. Lab tests show that
apatite composed of lime and phosphoric acid works as well as today’s more expensive activated
alumina filters.

Once the engineers optimize the filter’s operation, they hope to test it in a village in
India where excess fluoride is endemic and study the spent apatite’s potential as a fertilizer,
Jaffe said. “It would be irresponsible if we don’t figure out what to do with the used
material,” he said.

Soboyejo and Jaffe, both funded by Princeton’s Grand”>http://www.princeton.edu/grandchallenges/”>Grand
Challenges program on global health, are now collaborating to develop filters made from both clay
and apatite that could remove pathogens and fluoride from drinking water at once.