At least three Princeton Engineering alumni – all in the Seattle area – are engaged in exploring the mysteries
of the deep sea. 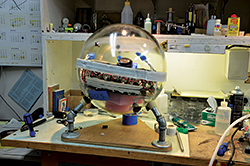 As a research scientist and senior engineer at the University of Washington, Andy Stewart (Ph.D. ’12) works on a variety of projects, such as basic research in dynamics and control of autonomous systems (typically underwater vehicles), and designing and building a high-definition video camera for streaming live footage from a hydrothermal vent as part of the National Science Foundation’s decades-long Ocean Observatories Initiative.

Stewart also is working on instruments – five of which are set to be deployed this summer – that sit in the ocean at depths of nearly 15,000 feet and measure water velocity using the Earth’s magnetic field.

“What we do is essentially build a circuit out of some saltwater pathways and record voltage potential between known locations in the flow,” he reports. “My main contribution has focused on a mechanism that switches polarity in this circuit. It requires mechanically switching a seawater pathway inside the device and must function under very high external pressure.”

Stewart credits his research with Naomi Leonard (BSE ’85), the Edwin S. Wilsey Professor of Mechanical and Aerospace Engineering, as having prepared him well. “Having a strong background in fundamental theory is critical when you’re cooking up projects that push limits,” he says. “The experience I gained working in Naomi’s lab with the underwater vehicle test bed gave me the skills I’m now using to develop the next generation of ocean-science technology.” 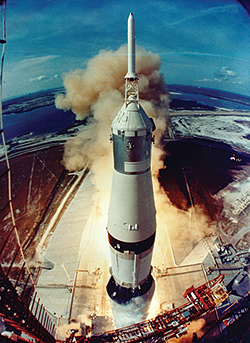 Bezos Expeditions, founded by Amazon.com CEO Jeff Bezos (BSE ’86), is attempting to recover the five F-1 rocket engines that, firing in concert, launched NASA’s historic Apollo 11 mission. After they burned for just a few minutes, the F-1s plunged back to Earth into the Atlantic Ocean. Using state-of-the-art deep sea sonar, the Bezos Expeditions team has located the Apollo 11 engines, which are lying 14,000 feet below the surface. The expedition plans to attempt to raise one or more of them from the ocean floor. Writing on the expedition website, Bezos expresses hope that the engines will be put on public display should any be recovered. “NASA is one of the few institutions I know that can inspire 5-year olds,” he writes. “It sure inspired me, and with this endeavor, maybe we can inspire a few more youth to invent and explore.” 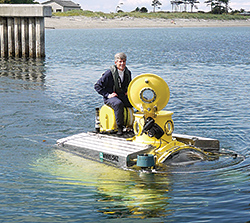 Stockton Rush (BSE ’84) is co-founder and CEO of OceanGate Inc., a provider of manned deep-sea submersibles that aims to expand the capabilities of research and academic institutions, government agencies and commercial businesses. OceanGate is developing a manned submersible that can reach depths of 6,000 meters, which it says will dramatically change the way we access the deep sea. The project, in collaboration with the University of Washington’s Applied Physics Lab, is leveraging advances in material science, electronics and aerospace technology.