Princeton researchers have discovered that elephants’ hair is not merely a decorative feature for pulchritudinous pachyderms; it also plays an important role in how the giant beasts regulate their body temperatures.

The researchers found that elephants’ widely spaced hairs draw heat away from the skin, helping the animals cool down. 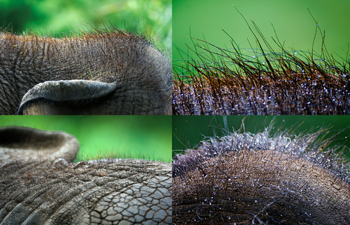 “Hair works as an insulator when it covers the skin,” said Elie Bou-Zeid, a professor of civil and environmental engineering who led the research team. “But in this paper, we show that sparse hair has the opposite effect. What was surprising to us when was the magnitude that we found for this positive effect.”

In a very light breeze, hair can increase an elephant’s heat loss by as much as 20 percent, the researchers found. The reason for this is that the hairs allow heat to travel away from the elephant’s skin, where it can more readily transfer into the air.

With the highest ratio of body mass to skin surface among terrestrial animals, elephants have a great need to release excess body heat. They use a variety of techniques to do this, from flapping their ears to using their trunks to spray water or mud across their backs. But, as the research team found, the elephants’ hair also plays a key, if little-noticed role.

Bou-Zeid said the paper, published Oct. 10 in the academic journal PLOS One, grew from an undergraduate course project conducted by the paper’s lead author, Conor Myhrvold. Myhrvold, who graduated in 2011 with a degree in geosciences, finished the project, and he and Bou-Zeid continued to pursue the research along with Howard Stone, the Donald R. Dixon ’69 and Elizabeth W. Dixon Professor of Mechanical and Aerospace Engineering.

“Exactly 300 years ago, elephant hair was first described in the science literature, in a letter to the Fellows of the Royal Society by none other than Antonie van Leeuwenhoek, who did the study with one of the microscopes he invented,” Myhrvold said. “After that, elephant body hair was seldom acknowledged let alone studied.”

“It’s not too surprising that something so small could be forgotten on something so large, the world’s largest land animal,” Myhrvold continued, “but given that elephant hair was featured in the world’s first scientific journal by one of science’s greats, then disappeared almost altogether from the literature soon after that, I guess it was a case of ‘hair today, gone tomorrow.'”