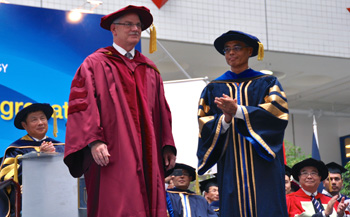 The Hong Kong University of Science and Technology (HKUST) awarded an honorary doctorate to H. Vincent Poor, dean of Princeton’s School of Engineering and Applied Science, in recognition of his fundamental contributions to wireless communications and his innovations in undergraduate education.

HKUST, regarded as one of Asia’s top universities in engineering, awarded its Doctor of Engineering Honoris Causa degree to Poor at its 20th Congregation ceremony on Nov. 16.

In awarding the degree, HKUST cited the enormous global effects of wireless technology. “At the center of this world revolution is Prof. Poor, whose pioneering contributions to multiple access communications made it possible for many users to share the same wireless channels effectively,” the university said.

HKUST also cited Poor’s numerous awards for distinguished teaching and specifically the course “The Wireless Revolution,” which Poor created in 2000. The class weaves together an accessible introduction to the technical underpinnings of wireless technology with a discussion of its social impact. “This course is an expression of Prof. Poor’s educational philosophy, which addresses a special need in higher education today: better integration of engineering and the liberal arts,” HKUST said in its citation.

Poor, who also holds the title of Michael Henry Strater University Professor of Electrical Engineering, earned his Ph.D. at Princeton in 1977 and went on to teach at the University of Illinois at Urbana-Champaign until joining the Princeton faculty in 1990. In 2005, Poor was appointed founding director of what is now the Keller Center for Innovation in Engineering Education, which is dedicated to broadening education about technology and society — within and beyond the classroom — for all students at Princeton. 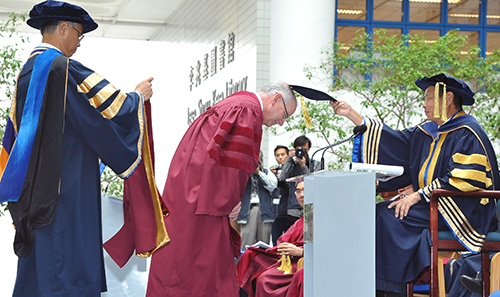