As a young archaeologist, Peter Bogucki based a groundbreaking theory on the development of Western civilization on the most ancient of human technology, pottery.

It took nearly thirty years, and an astounding development in modern biochemistry, to finally confirm he was right.

Bogucki’s theory was that the development of cheese making in Europe – a critical indicator of an agricultural revolution – occurred thousands of years earlier than scientists generally believed. The insight, based on a study of perforated potsherds from dig sites in Poland, promised to change the scientific understanding of how ancient western civilization developed. But, although the detective work in Bogucki’s 1984 article in the Oxford Journal of Archaeology was extensive, it was impossible to prove whether the bits of pottery were the remains of a cheese maker or some other type of strainer.

There the matter lay, until researchers at the University of Bristol used a new type of test to measure ancient molecular remnants embedded within the pottery.

“Lo and behold, it was chock full of dairy lipids,” said Bogucki, who is the engineering school’s associate dean for undergraduate affairs. The discovery of milk lipids, a type of molecule signaling milk processing, was a smoking gun. 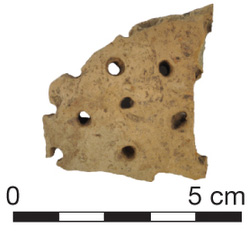 In an article published in the scientific journal Nature last week, Bogucki and his fellow researchers explain that the presence of milk byproducts found in the pottery provides compelling evidence that farmers used the perforated pots to separate cheese curds from whey. It also explains how Neolithic Europeans, who were generally unable to digest lactose, were able to use milk for food – the whey retains most of the lactose in milk, allowing the farmers to eat the low-lactose cheese.

“The discovery provides evidence of the manufacture of long-lasting and transportable dairy products as well as the consumption of low-lactose dairy products at a time when most humans were not tolerant of lactose,” said Mélanie Salque, a researcher at the University of Bristol and the lead author of the Nature article.

The discovery has attracted notice from around the world. Bogucki has been quoted in the Los Angeles Times, the Philadelphia Inquirer and the BBC, and has been interviewed on National Public Radio. Polish national newspapers, such as Gazeta Wyborcza, have also run articles on the work.

“It is a new experience to be in the midst of a media frenzy,” he said. Although it can be a little distracting, Bogucki said “it sharpens your way of talking about what you have done and that is often very useful.”

Bogucki’s expertise is prehistoric archaeology – he is currently working on a book on early farming in Europe – but he specializes in central Europe. Like most border regions, areas like modern-day Poland are of great interest to social scientists studying the interaction of cultures.

“The sites we are dealing with are in north central Poland,” he said. “They are on the northern fringe of the earliest farming settlements. To the north of them lay the hunter gatherers of the Baltic basin.”

In the early 1980’s, archaeologists began narrowing their estimates of when key farming developments occurred in ancient Europe. In 1981, Andrew Sherratt, at Oxford, published a seminal paper describing his theory of a “secondary products revolution,” a leap in civilization in which ancient farmers began using livestock for more than just meat. Anthony Legge, then at the University of London, published papers arguing that farm communities had adopted dairying sometime between 4,000 and 3,500 B.C., earlier than previously thought.

“Tony was studying animal bones from sites in the British Isles and noticed the patterns at which the cows were slaughtered – lots of young males and older females – were consistent with what you would find in a dairying economy,” Bogucki said.

At the time, Bogucki was serving as director of studies of Princeton Inn College, now Forbes College, and continuing his archaeological work. He had noticed an unusual type of pottery at a number of sites around Poland: fragments of pots that had been perforated with small holes. But he did not think too much about them until a chance visit in Vermont.

“My wife and I were driving back from a wedding in Canada, and we stopped at a friend’s house,” Bogucki said. “She had a lot of artifacts from the 19th century that she had gathered from the area and one of them was a ceramic strainer. It intrigued me because the only other strainers of this type that I was familiar with were the ones from Poland.”

“I said ‘What did they use these for?’ And she said, ‘Cheese making, of course.'”

In his 1984 article, “Ceramic Sieves of the Linear Pottery Culture and Their Economic Implications,” Bogucki developed his argument that dairying developed far earlier than generally accepted. He based his argument on potsherds from archaeological sites of the Linear Pottery Culture, a Neolithic civilization whose remains are characterized by distinctive incised lines on its pottery. 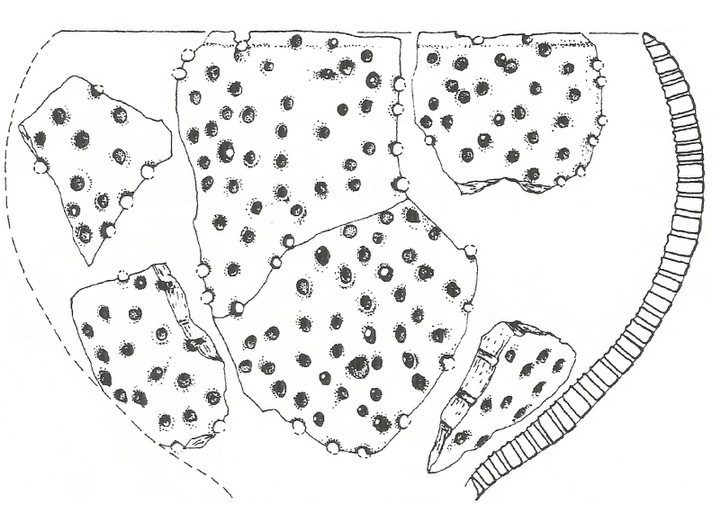 Bogucki noted in his paper that the sieve sherds were frequently found at sites dating to the Neolithic period, well before even the time Legge suggested. But the sherds, to give them their correct archeological term, received little attention from archaeologists, who often focused on more spectacular artifacts. When sieves were mentioned in scientific literature, a variety of uses were proposed ranging from honey strainers to braziers. Bogucki found them unconvincing.

“Why raw honey should require straining in the first place is difficult to answer, for it would seem that it is perfectly usable straight from the comb,” Bogucki wrote. “The case for the Neolithic perforated vessels as braziers or ember-holders is equally difficult to support but maddeningly tough to demolish, although it seems rooted in a somewhat romantic view of prehistoric rural life.”

Using data he collected from dig sites in Poland, Bogucki analyzed animal remains from Linear Pottery Culture settlements and concluded that Linear Pottery settlers seldom hunted for food and relied heavily on cattle. There were also almost no remains of pigs, a far more efficient meat source than cattle.

Bogucki also determined that raising cattle for meat alone would have made no economic sense for the Linear Pottery farmers who carved grain fields from dense forests. He estimated that the herds would have consumed too much food over too long a time to justify raising them simply for slaughter. Cheese, on the other hand, allowed for a storable and continuing food source.

“Linear Pottery communities clearly had access to milk; to ignore such a resource would negate any economic advantages gained from keeping domestic cattle in the central European forests,” he wrote.

But production of milk alone would not justify dairy farming, as Bogucki explained recently.

“It only makes sense if you can convert it into something that is storable and will get you through the winter and into the next season,” he said.

Bogucki’s theory was solid, but it was also controversial. For one, it meant that the secondary products revolution developed over a much longer period. There also was no smoking gun to prove the cheese theory and disprove the existence of a Neolithic honey strainer.

“Everyone said that’s interesting,” Bogucki said. “No one really knew where to go with it.”

That remained the case until a British biochemist, Richard Evershed, developed a technique to analyze lipid remnants trapped in ancient pottery. Evershed, a professor at the University of Bristol, was able to identify the remains of milk lipids that had bonded to pottery shards.

“I came across Bogucki’s work from the 1980’s that I found fascinating,” she said. “I think he was very pleased that someone could finally test his hypothesis.”

After hearing from Salque, Bogucki contacted colleagues in Poland and arranged for samples to be transferred to Bristol for testing. Then he waited.

“Mélanie sent me an email saying you will be very happy with the results,” he said. The research team reported its findings in Nature on Dec. 12. Besides Bogucki, Salque and Evershed, the authors were: Joanna Pyzel, of the University of Gdansk; Iwona Sobkowiak-Tabaka, of the Polish Academy of Sciences’ Institute of Archaeology and Ethnology; Ryszard Grygiel, of the Museum of Archaeology and Ethnography in ≈Å√≥d≈∫; and Marzena Szmyt, of the Poznan Archaeological Museum.

Bogucki said he would like to pursue similar research in the future, perhaps studying the nutrition of the Linear Pottery farmers or their interaction with the hunter gatherers in the region. And, although he is gratified to see his theory validated, he wouldn’t mind moving on to a different subject.

“I actually hate cheese. I don’t like the taste, I don’t like the texture,” Bogucki said. Making another breakthrough around his taste for mint chocolate-chip ice cream, however, seems unlikely. “I suppose I am destined to have my career forever linked with cheese making.”