Five-year ‘best of’ retrospective goes on the road

A special “Princeton Art of Science” traveling show consisting of 44 images chosen from the more than 250 images exhibited during the competition’s first five years opened in September at Liberty Science Center in Jersey City, N.J. The traveling show was selected by celebrated photographer and professor emeritus Emmet Gowin and Joel Smith, former curator of photography at the Princeton University Art Museum.

The exhibit was made possible through the generosity of the David A. Gardner ’69 Fund in the Council of the Humanities and the School of Engineering and Applied Science. The exhibit will be on display at Liberty Science Center through the end of August, when it will travel to other venues. 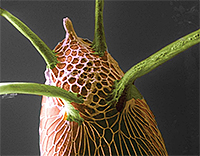 Five-Horned Eggshell (left)Nir Yakoby (postdoctoral researcher) and Maria Pia Rossi (Drexel University)
Department of Chemical and Biological Engineering
This may look like a five-horned monster, but it is actually an image of a fruit-fly egg. The four green “horns” are tubes that allow the baby fly developing inside to breathe. The smaller, white horn at the top is the tube the father fly used to deposit his sperm and fertilize the egg. This particular fly is Drosophilia virilis, which is widely used in scientific research. 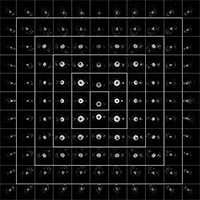 This Is a Teapot? (right) Rafi Romero ’12 (undergraduate)
Department of Computer Science
Have you ever noticed the patterns that form on a table when light shines on a wine glass? The study of this kind of phenomenon – the way parallel rays of light bend around a curved surface – is known as caustics. This image is a caustic map of the Utah teapot, a standard object used in computer graphics to test how light interacts with objects in a scene.

Secret Forest (left)Sonia Naidu (graduate student) and Enrico Sassoni (graduate student)
Departments of Civil and Environmental Engineering and Chemical and Biological Engineering
Acid rain causes marble monuments and sculptures to deteriorate, resulting in damage to our cultural heritage. Princeton’s art conservation laboratory is experimenting with creating a surface treatment for marble made out of a mineral called apatite. Though the apatite coating is invisible to the naked eye, through a scanning electron microscope the apatite forms a forest of tiny protective crystals on top of the marble. 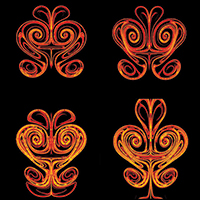 Stirring Faces (right)Steve Brunton, Ph.D. ’12 (graduate student) and Clancy Rowley ’95 (professor)
Department of Mechanical and Aerospace Engineering
These fanciful curlicues were generated by a computer to simulate the movement of a small plate through a fluid such as water or air. The “eyes” of each of the face-like pictures correspond to vortices caused by the motion of the plate through the fluid. These simulations help researchers better understand how birds and insects fly, and in turn help the researchers design smarter airborne micro-robots.