A few months before Hurricane Sandy slammed into the Northeast, Ning Lin Ph.D. ’10 and her colleagues published an article in the journal Nature Climate Change warning that devastating storms could become more frequent as the climate changes. 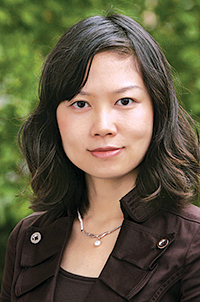 The paper, with an emphasis on the hazards of storm surge and a focus on lower Manhattan, seemed prescient. After the storm, city officials asked Lin, an assistant professor of civil and environmental engineering, to help assist New York City prepare for future storm dangers. In June, Lin and other scientists including, Michael Oppenheimer, the Albert G. Milbank Professor of Geosciences and International Affairs, and Guy Nordenson, a professor of architecture, presented recommendations to help the city deal with future climate events.

Most recently, the three researchers, along with James Smith, chair of the civil and environmental engineering department, have joined a multi- university study of flood risks for coastal areas affected by Hurricane Sandy. Smith said the goal of the project, funded by a $2.3 million grant from the Rockefeller Foundation, is to present a report and recommen- dations to the U.S. Army Corps of Engineers, which is responsible for flood management.

“It is a combination of design and architecture along with hazards assessment,” said Smith, who said the project will last about 15 months. “The world is changing. The goal of the study is to provide new design ideas for addressing the changing hazards from storm surge associated with climate change.”