For decades, “trust but verify” has been the guiding principle of international arms control. 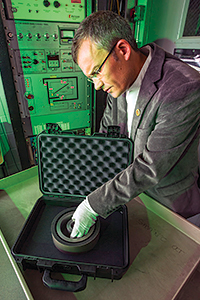 A generation of diplomats and political leaders has worked to maintain the trust. Engineers and scientists, such as Alexander Glaser, have worked on the “verify.”

“How do you know that inside a box labeled ‘nuclear warhead’ is actually a warhead and not something else,” asked Glaser, an assistant professor in mechanical and aerospace engineering and at the Woodrow Wilson School. “How do you know if someone is cheating?”

Glaser, with Robert Goldston Ph.D. ’77, a professor of astrophysical sciences, and other colleagues at the Princeton Plasma Physics Laboratory and Microsoft Research, is developing a process to verify that nuclear weapons slated for destruction are actual warheads, not fakes. The system would do so without ever measuring information that could reveal specifications of the warhead itself.

The project, funded by the nonprofit Global Zero and the U.S. State Department, involves the creation of a “zero-knowledge” proof. These proofs, invented by cryptographers in the 1990s, allow someone to demonstrate that a statement is true without revealing why it is true. To develop the system, which is based on a technique called “active neutron interrogation,” Glaser and his colleagues at the lab use an unclassified test item, made of concentric metal shells, that simulates a warhead for detection purposes.

Current arms-limitation treaties limit deployed warheads in the American and Russian arsenals, essentially by counting missile silos or submarines. In contrast, future agreements are likely to place limits on the total number of warheads, which will require inspections on thousands of warheads that are in storage.

“That is where our project comes in,” Glaser said. “We can tell you what is inside the box without ever looking into it.”