Experts in fields ranging from computer science and engineering to economics, policy, human rights and law gathered at Princeton on Nov. 30 to help shape the agenda for the University’s new DeCenter, an interdisciplinary center exploring the promise and perils of blockchain technology.

“The DeCenter is about the decentralization of power through blockchain technology,” Jaswinder Pal (J.P.) Singh, the DeCenter co-director, said in his opening address. He thanked the roughly 60 invited guests, including CEOs, entrepreneurs, academics and investors, for gathering and “helping us shape the agenda for the DeCenter and for the role that academia and scholars can play in this important field.”

Blockchain technology uses cryptography and the engineering of economic incentives to create a widely distributed record of transactions that participants agree upon. The goal is to achieve trust without relying on a central authority. Most famously used to create Bitcoin and other cryptocurrencies, the technology also offers potential disruptive uses across many areas of finance, business, governance and society. This year, Princeton established the DeCenter, or more formally, the Center for the Decentralization of Power through Blockchain Technologies, to help develop the technology and its applications and to study its societal and policy impacts.

Singh, Princeton’s Professor of Computer Science, Technology, and Societal Change, opened the daylong event by sketching the vision for the new center. Speaking before a group that convened as the collapse of the FTX exchange shook the cryptocurrency world, Singh said the fundamental innovation in blockchain technology is the potential for the decentralization of trust. He said this decentralization could not only create new applications but also provide paths for individuals to retain more control from larger, centralized organizations to which power has accumulated in society — that is, the decentralization of power in appropriate areas. But he noted that recent events such as the collapse of FTX also demonstrated the pitfalls of the technology and its use. The goal of DeCenter, he said, was to focus academic rigor and real-world experience on charting a course to avoid such harms while reaping the benefits of the technology.

Singh said it is critical for society to grapple with these questions at the outset to guide the designs and policies that will shape the area. He said this cannot be a purely technical approach but must also involve gathering leaders, thinkers and practitioners from a broad array of disciplines.

“Our aim at the DeCenter is to be a thought and impact leader in this important area and help set a proper foundation for it,” Singh said. Singh identified three distinguishing elements of the DeCenter’s approach: Examining both opportunities and risks; taking a highly interdisciplinary and integrated approach across real-world applications, technology, economics, policy, and societal implications; and taking a global rather than U.S.-centric approach.

[Scroll down to watch video of the day’s opening talks]

Andrea Goldsmith, Dean of the School of Engineering and Applied Science and DeCenter co-director, said Princeton Engineering, working through initiatives like the DeCenter, is positioned to play that role.

“The DeCenter is at the intersection of technology, society, policy and benefits to humanity, and Princeton, given its culture and history, is uniquely poised to bring those critical elements together,” said Goldsmith, the Arthur LeGrand Doty Professor of Electrical and Computer Engineering.

Goldsmith said the engineering school has researchers working at the cutting edge of blockchain technology and has the advantage of leveraging resources from across a great liberal arts university as well as its community of alumni.

“In the DeCenter, the questions are particularly challenging because they are not just technology questions,” she said. “The really deep questions are the ones at the intersection with society: How does this impact society? What regulations do we need to ensure that we protect users, but don’t stifle innovation?”

“These are the questions that we need your help in answering, and we want the discussion today to help us formulate these questions.” 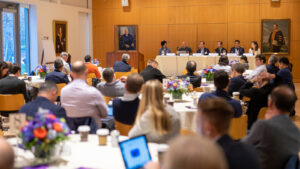 After introductions, the day’s conference broke into panel discussions that were both vigorous and wide-ranging. They addressed several areas: open challenges in developing the underlying blockchain technologies, blockchain applications and their societal implications, and lessons learned from the FTX collapse. To encourage open expression among participants, the discussions were held under Chatham House Rules, in which content could be quoted without identifying individual speakers.

Some participants heralded new applications just around the corner, from decentralized mortgages and dematerialized passports to the freer flow of information and media. Others, often in the same discussion, pointed to the “large gap between theoretical value proposition and what we’ve seen have a real impact.”

Participants emphasized the potential for blockchain to change the way trust is allocated in societies that have traditionally placed their trust in large, centralized organizations, from the European Union to the Federal Reserve. The computer and the internet changed society in ways their creators never could have foreseen, others noted. “Now, a new kind of trust may change everything.”

One panel focusing on the societal implications of these technologies discussed the value that cryptocurrencies and other decentralized systems could bring to people living under autocratic regimes and countries with limited access to banking systems and stable currencies.

In addition to the panels, the day’s session included a public question-and-answer presentation between Goldsmith and Rostin Behnam, the chair of the U.S. Commodity Futures Trading Commission. Behnam said he expected that Congress and administrative leaders would be making a strong effort to regulate the market involving cryptocurrencies. Recent developments including the FTX collapse have signaled to market regulators that action is required.

“These are real, tangible events where constituents and customers and investors and Americans are getting hurt,” he said. “We can’t stay on the sidelines.”

In the larger area of blockchain, Behnam said the entire community needs to work to understand the technology, its applications and its consequences.

“There is so much possibility, and I don’t mean that in a positive or negative way, with this technology,” he said. “I think it is so important that we collectively think about what are the risks and what are the opportunities — and having objective, thoughtful, deliberative conversations about the technology and what role governments, agencies and regulators should play.”

Goldsmith said after the event that the discussions exceeded her expectations and clearly demonstrated the DeCenter’s potential for positive impact well beyond the University.

“The DeCenter event was among the most special academic convenings in my career,” she said. The conference offered “energizing breakout sessions for brainstorming around the deep and challenging interdisciplinary questions that require Princeton leadership to answer.”

In an address during the morning session, University President Christopher L. Eisgruber said the conference was perfectly aligned with Princeton’s goal of nurturing innovation and dialogue on issues critical to society.

“We stand at an inflection point,” he said. “We have seen how quickly technologies sweep through society, changing the fabric of our lives and the ways we relate to one another.”

Eisgruber said blockchain technology promises novel opportunities, but also poses risks, some of which have become evident in recent weeks. “Where paths of such significance meet, Princeton has a responsibility to shine a light, advance the science, and help direct this technology so that it broadly benefits humanity,” he said.

In closing the conference, Princeton University Provost Deborah Prentice said that it is unusual to see such a diverse group of academics and practitioners — including computer scientists, engineers, political scientists, economists, lawyers, policymakers, business leaders and technology entrepreneurs — gathered to address a topic of emerging importance. She said it was particularly intriguing because the ultimate shape of the research remains unknown and will be guided by the DeCenter’s participants.

“We’ve got all these groups in the room, and all of them are talking across larger boundaries and with more uncertainty than they are used to,” Prentice said. “And all of them are listening really hard and are here to learn.”