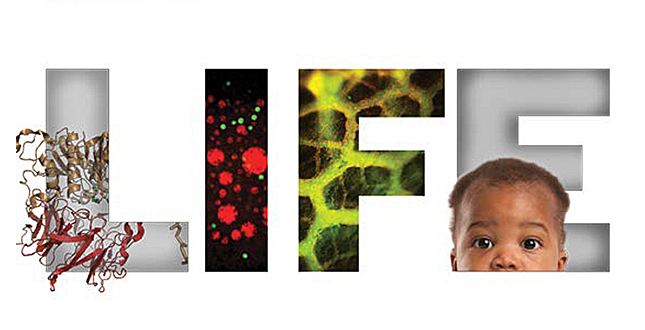 Eric Wieschaus had a question.

It was Friday afternoon, and Stephanie Weber was well into her presentation on cellular structure when Wieschaus, a molecular biologist and Nobel laureate, politely raised his hand and gave the talk a nudge in a different direction.

“We’d been thinking about the problem from a physics perspective,” said Weber, a post-doctoral researcher in chemical and biological engineering. “Eric’s question was about the biology – about transcriptional regulation.”

For a few minutes, the question bounced back and forth among the group gathered in a large conference room in Hoyt Laboratory. Grad students, postdocs, junior and senior professors ran with the new thought for a while until Weber resumed her talk. After, Weber and Wieschaus arranged to talk further about the approach.

“Science is essentially social,” Wieschaus, the Squibb Professor in Molecular Biology, said later. “Somehow you have to think of a way for people who are truly scientists – whether they are grad students, postdocs or professors – to participate. How do you do that? One way is to serve pizza.” 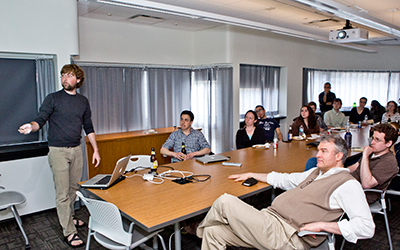 In what has become a Friday afternoon tradition, the bioengineering faculty orders pizza and offers a rolling series of lectures on ongoing research. Whether the participants are, like Weber, postdocs making their first formal presentation or senior scientists like Wieschaus, the atmosphere is democratic. It is also eclectic; the gatherings frequently include representatives from a wide range of scientific disciplines.

That makes sense; bioengineering is a hybrid by its very nature. Wieschaus calls the field a scientific “border city.” It is a deliberate merger of two well-settled scientific disciplines and, as a result, attracts people who are comfortable working outside their normal framework.

“It is not just the confrontation of the border,” he said. “Immigrants from all over the world are attracted to border cities. People who are in other areas see it as a place where novel interactions and ideas can occur.”

Bonnie Bassler, the Squibb Professor in Molecular Biology and chair of the Department of Molecular Biology, said Princeton has long had the philosophy that the borders of academic disciplines should not become an obstacle to scientific inquiry. In fact, today’s students are not only comfortable working across different fields, they expect it.

“Students come here expecting open mindedness,” she said. “Someone might be trained in engineering but they want to immerse themselves in biology.”

Richard Register, the Eugene Higgins Professor of Chemical and Biological Engineering and the department chair, said that bioengineering at Princeton “tends to focus on the fundamental, rather than the clinical, level.”

The diversity of backgrounds, and the commonality of interest, is valued by the participants. In many ways, the research focus is represented by the Friday afternoon pizza.

“It’s a formal presentation but at the same time it’s a discussion among colleagues,” Weber said.