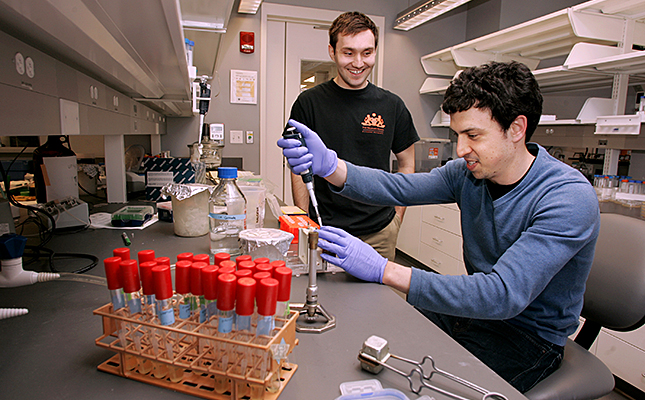 Among the baroque shapes of molecular biology, with its twisting proteins and spiraling nucleic acids, the lasso peptide stands out: like a rope spun by a tiny cowboy, it is a trailing whip of amino acid topped with a distinct lasso.

The shape is not just aesthetically inter- esting. Scientists like James Link BSE ’00 believe that the lasso peptide might serve as a scaffold upon which entirely new drugs and medical therapies can be constructed. In fact, several lasso peptides naturally have thera- peutic effects: some kill a specific type of bacteria; another binds to a part of liver and kidney cells that controls glucagon, which is important in diabetes.

“This structure is something that nature seems to have used to carry out a lot of differ- ent functions that are medically relevant,” said Link, an associate professor of chemical and biological engineering. “Among other things, our research is looking into whether they may lead to an entirely new way of making drugs.”

Peptides – and their larger cousins, proteins – are long chains of amino acids. The large size of these molecules provides a critical functional benefit in biology. Their complexity allows them to perform highly specialized tasks for organisms such as fighting infection, copying DNA and carrying out chemical reactions in cells.

This complexity also holds great potential for medicine. Currently, most drugs are made of small molecules that perform relatively simple tasks within the body. But Link and his co-researchers believe that larger molecules can eventually be harnessed to create drugs that perform far more complex actions.

“The possibilities are endless,” said Mikhail Maksimov, a graduate student in the lab who has written several papers on lasso peptides with Link and won a Dodds Fellow- ship for his fifth year of study at Princeton.

The downside, for medical science, is that most large molecules’ complexity leads to instability. Storing and working with peptides and proteins is formidably difficult and in many cases impractical because of their innate fragility.

That is where the lasso peptide stands out. It is far larger than small molecules typically used in medicine, but far more stable than conventional peptides and proteins. The secret to its stability is its knotted shape.

“Enzymes called proteases, which slice up peptides and proteins, are a main cause of instability for molecules inside the

body,” Link said. “The knotted shape of the lasso peptide renders them largely resistant to proteases.”

Some particularly resistant lasso peptides can even stand up to the protease-rich environ- ment of the digestive tract, an area normally off-limits to therapeutic proteins and peptides.

“Lasso peptides have multiple benefits – they are small enough to work with and they are stable,” Maksimov said. “At the same time, they have a degree of complexity that allows us to do many things with them.” 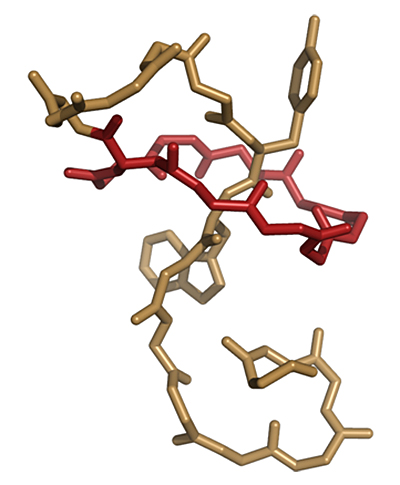 “Since nature has already used the lasso-peptide scaffold for therapeutic purposes, we are excited about the possi- bility of re-engineering lasso peptides to make completely new drugs that nature has not explored,” Link said.

Link also is looking for additional lasso peptides to serve as potential scaffolds. Since they were discovered in 1991, only 30 distinct lasso molecules have been

identified, with more than half discovered in the last two years. Partly, that is because

the molecules are produced by bacteria,

and only under the right conditions. So researchers not only need to know which bac- teria will make the molecules, they also need to know how to stimulate their production.

Link’s lab, however, has developed an alter- native approach to discovery.

“Right now, we don’t understand enough about the limitations of lasso peptides or how far we can push the scaffold,” Maksimov said. “We are trying to find more examples in nature.”

To accomplish this, the researchers have studied the DNA sequence of bacteria known to produce lasso peptides in search of charac- teristics that could be mirrored in other organisms. In a series of recent publications, the team has identified 98 potential lasso peptide producers from 78 gene clusters on different organisms.

a trivial task,” according to Maksimov. Often, the researchers will take a genetic sample from a lasso-peptide producer and graft it into a microbe like E. coli that is easy to work

with. Using this technique, Link’s lab has produced a number of previously unknown lasso peptides.

At the same time, the lab is working on identifying the functions of the new lasso peptides.

“We have developed robust tools to discover and produce new lasso peptides,” Link said. “Based on our analysis, there are dozens more to find. Our next goals are to find the role of these lasso peptides in bacterial physiology and to turn them into new ways to combat disease.”