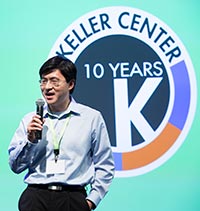 Like most guitar makers, Adam Klosowiak demonstrated his instrument by playing. His fingers flew over the strings, and the sound was clear and pure, but Klosowiak did not stop there.

He thumped the guitar against a podium, telling a gathering at AppNexus’s Manhattan headquarters that “you wouldn’t be able to do that with a wooden guitar.” And when his business partner Jake Sheffield tossed him a rubber softball, Klosowiak, who graduated from Princeton University this year with a degree in electrical engineering, quickly switched his grip and swung the guitar like a bat, popping the ball in a high loop over the crowd. The guitar, he said, not only sounds good but “for everyday use, it’s pretty much indestructible.”

KLOS Guitars, featuring a new type of carbon-fiber travel instrument made by Klosowiak and four associates, was the first of seven teams that presented their startups at the Keller Center’s annual Demo Day events last week. The teams appeared before full crowds in the Friend Center at Princeton on Aug. 11 and the following day at AppNexus in Manhattan. In addition to the live presentations, the teams produced videos highlighting their efforts.

This was the fourth year that the Keller Center has held its Demo Day, the culmination of the center’s eLab student startup accelerator. The summer-long program provides work space, instruction and support for student teams who compete for admission. The program also provides up to $20,000 in funding without taking any equity in the fledgling ventures. Team members are matched with veteran entrepreneurs who serve as mentors, and they attend workshops and coaching sessions that concentrate on different aspects of launching a startup.

This summer marked the first year that the teams worked at the University’s new Entrepreneurial Hub at 34 Chambers St. The 10,000-square-foot incubator space in downtown Princeton offers working space and information technology support for student ventures as well as startups founded by faculty members and alumni. 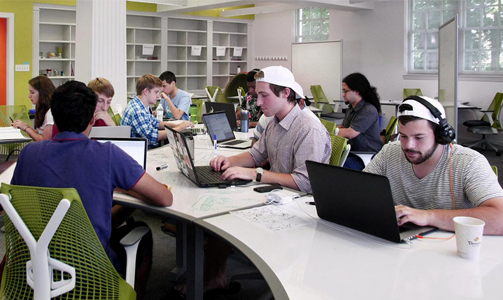 “The Hub symbolizes the University administration’s commitment to strengthening entrepreneurship as part of students’ education,” Mung Chiang, the Keller Center director, said in his address kicking off the Demo Day presentation at AppNexus’s headquarters on West 23rd Street. Chiang, who is the Arthur LeGrand Doty Professor of Electrical Engineering, said eLab is an important part of that commitment, allowing students “to explore themselves as entrepreneurs and to explore the world of entrepreneurship.”

This year’s presentations included a precise-dosage applicator for topical medicines, a system for efficient processing of pharmaceutical clinical trials and an app that allows college students to make new friends in a safe online environment. The eLab program is often hectic as teams cram as much work as possible into 10 weeks. Vaidhy Murti, co-founder of the Friendsy team, recalled one point at which his group realized they needed to add a chat feature to their college social networking platform.

“We got together on a Tuesday afternoon to whiteboard our thoughts,” Murti, who graduated this year with a degree in computer science, said after his presentation. “We managed to build out a fully functioning chatroom feature and launch it by Friday.”

The teams receive weekly instructions on entrepreneurial topics and follow a program designed to emphasize flexibility and response to potential customers’ needs.

“eLab is a fantastic program,” said Andrew Klutey, who graduated this year with a degree from the Woodrow Wilson School of Public and International Affairs. “We have a place to work, mentors, incredible resources.” 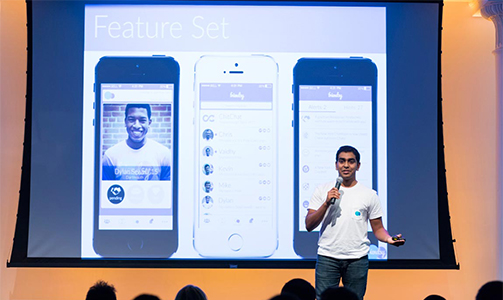 The first eLab team to return for a second year, Friendsy is a social networking platform that allows college students to make new friends through a private and secure system open only to fellow students. Murti and classmate Michael Pinsky, who graduated this year with a degree in psychology, met by chance after they sat on adjacent couches to watch a New York Yankees game freshman year.

“Pretty soon, Mike and I became roommates, best friends, and we started this company together,” Murti said. But they realized that “more often than not, it does not happen this way.”

Since beginning as a website at Princeton, Friendsy has expanded to 84,000 users on campuses across the country.

To avoid the pitfalls of some other social networking programs, Friendsy limits membership to people with a valid college email address. The program, available on a wide range of mobile devices, allows members to remain anonymous and only reveal certain details about themselves, such as their class year and major.

The system, which now includes a chat feature, is monitored to prevent harassment and negative comments. Murti said the goal was to make it possible “to make friends based on the actual conversation.”

“Chat rooms were wildly popular on the Internet of the past,” Murti said. “We feel we can make chat rooms great again.” 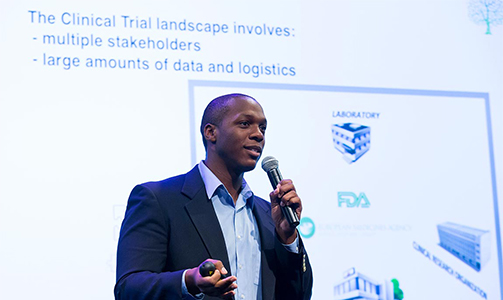 Clinical trials for new pharmaceuticals involve some the most cutting-edge technology available. But, as Jared Crooks pointed out, the foundation of many trials rests upon one of humanity’s oldest technologies: paper.

Crooks, who graduated from Princeton with a degree in astrophysical sciences in 2011 and received a Master in Public Affairs and a Master of Engineering this year, said the average form takes about seven minutes to fill out by hand. With large clinical trials involving thousands of patients, the time can add up quickly.

Crooks said his company has developed an automated form that allows a nurse to enter information by scanning a patient’s identification, such as a hospital wristband, rather than filling out the form with a pen. Not only does the system greatly speed up the process, it eliminates handwriting errors than can prove costly for some trials.

“It is the simplest solution to these routine, mundane problems that can drive a lot of value,” he said. 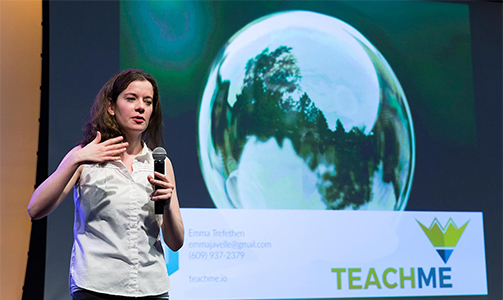 TeachMe is a different kind of social network ‚Äî one based on learning rather than socializing.

“Often what makes or breaks a new endeavor is having at least one connection with someone who is already excellent at the thing you are trying to learn,” said Emma Trefethen, a co-founder and CEO of TeachMe who graduated from Princeton this year with a degree in mathematics.

TeachMe is an online platform that connects college students interested in learning a variety of subjects with fellow students who are skilled in that area. The startup has run testing over the summer and plans to launch at four campuses, followed by a wider launch in January.

“We had someone who wanted to learn about quantum mechanics,” Trefethen said. “We have had other people who wanted advice about career choices and majors.”

Connections are not limited to academic subjects. Users can also find instructors for hobbies and random skills. Instructors can offer lessons for a fee or for free. Trefethen said the exchange would benefit both the student and instructor to “meet and share skills and knowledge with others in their community.”

“We want to give students an opportunity to make money doing what they already know how to do and what they love,” she said. 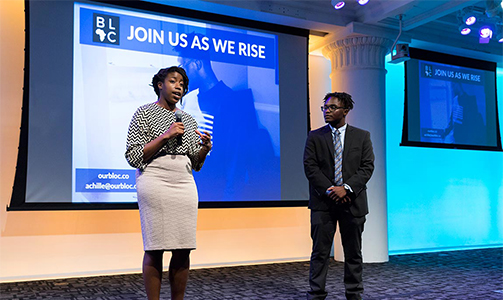 Achille Tenkiang opened his presentation with a few questions.

“How many of you remember applying for your first job?” asked Tenkiang, a rising junior pursuing a concentration in African American studies. “How many remember that as particularly stressful?”

Tenkiang said the process of moving from college to the workforce is difficult for all young professionals, but particularly for African American students who often lack access to networks available to many of their peers.

“Yes, grit and perseverance can make a substantial difference,” he said. But in a world in which hiring decisions are frequently based on personal contacts, it is often not enough.

BLOC is an online professional network connecting graduating black students with potential employers. The company offers connections and career coaching to students and access to a pool of qualified graduates to employers. Tenkiang said that companies are spending millions of dollars on recruitment with minimal impact on employment rate for African Americans, particularly in tech sectors.

He said that BLOC will enable companies to efficiently find employees whose skills meet their needs and work with firms on hiring and retaining qualified workers. The company is presenting a conference at New York University in November and plans an official launch of its web app this fall. 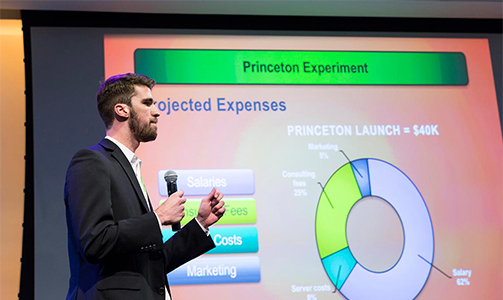 Even for the most connected generation, it can be hard to find something new to do.

“I have 20 different ways to talk to my friends on my phone but nothing to find new things,” said Andrew Klutey, who presented for the Rodeo team.

Rodeo is a new app that allows users to add new events to their calendars and browse for other events in their communities. If they find something interesting, users can invite a friend or “lasso” a group of friends to form a group to attend an interesting gathering.

“If that is not enough, you can go into our discover feed,” said Klutey. “What is trending, what is hot ‚Äî you can do that, too. Or you can just browse different events and see what is out there.”

The group plans to launch their application at Princeton in September and expand beyond that.

“We can create buzz,” Klutey said. “We can make it social and fun to discover new things to do on campus.” 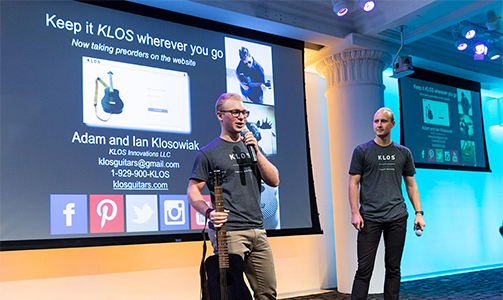 “I left the window open last winter break,” Adam Klosowiak said, holding up a wooden guitar and gesturing to its base. “A crack opened up here.”

“It’s the perfect hybrid of wood and carbon fiber,” Adam Klosowiak said during his presentation. “All that together makes a small, affordable and durable guitar.”

In addition to funding received through eLab, KLOS Guitars has raised money through a Kickstarter campaign. The group has also joined with the Bruce Arnold Foundation to provide guitars to military veterans to assist in treatment for post-traumatic stress disorder.

Besides the softball- and podium-hitting tests demonstrated at their presentation, the team has produced a small video library that includes members golfing, playing table tennis and rowing a canoe with a KLOS guitar. (The guitar used in the videos was available for strumming at the team’s demonstration table after their formal presentation.)

“Above all, we are targeting travelers and kids,” Klosowiak said. “It is a very durable guitar, and it is very easy to learn on.” 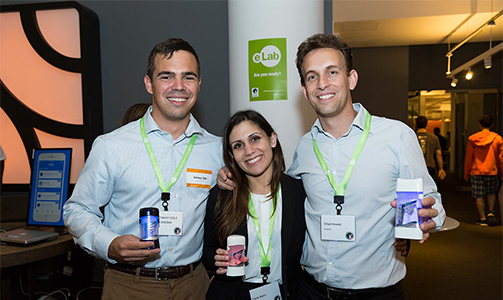 New drugs are being developed for treatments that require application directly to the patient’s skin, but it can be difficult and messy to apply the correct dosage. To address the problem, a team of researchers from Princeton has developed a portable and highly accurate system to apply medication to the skin. Called ClickStick, the device is the size and shape of an ordinary deodorant stick. It uses a motor and a microcontroller to apply topical creams and gels at a precise dosage.

“You simply press a button and you get an exact amount of application,” said Gilad Arwatz, a postdoctoral researcher in mechanical and aerospace engineering and one of the team’s founders.

The device, which is refillable and uses much less plastic than a standard dispenser, can also be used for personal care and cosmetics. For medical applications, the device is programmable, allowing medical professionals to easily control dosage. It can also connect online, allowing physicians to monitor dosage and timing of use.

“There are many drugs with compliance issues” ‚Äî both overuse and underuse, Arwatz said. “With ClickStick, you take the right medication, at the right time, and in the right dosage.” 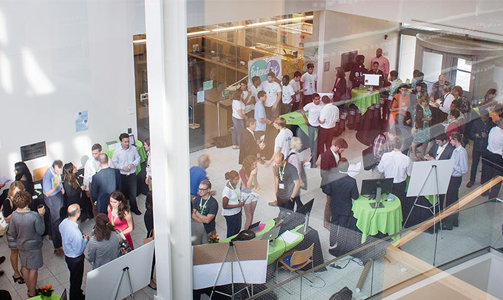