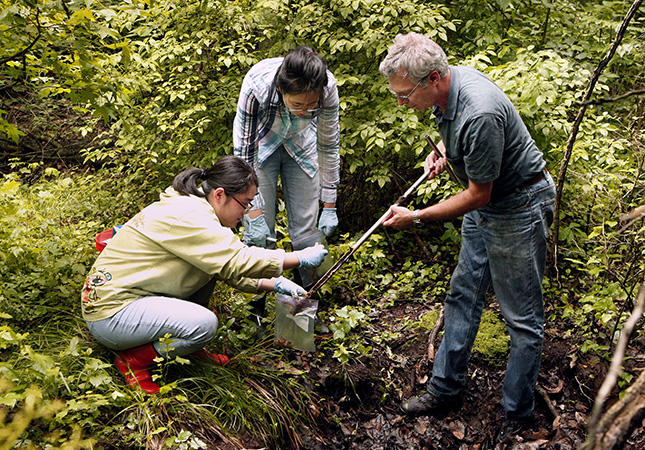 A mysterious vial of mud taken from a New Jersey swamp may end up offering a solution to several obstinate forms of water and ground pollution.

A few years ago, researchers in Peter Jaffe’s laboratory noticed that ammonium was inexplicably disappearing from a soil sample taken from the Assunpink Wildlife Management Area southeast of Princeton. Jaffe, a professor of civil and environmental engineering, suspected that an unidentified type of bacterium was breaking down the ammonia in the soil. What was truly interesting was the bacteria seemed to be converting the ammonia in the absence of oxygen – a behavior with potentially important implications for sewage treatment and other processes.

In addition to the technical challenges of identifying the mystery bacterium, Jaffe knew that potential funders would see his idea as little more than a hunch. He turned to the University’s Project X Fund, which supports work that is outside a researcher’s normal expertise or too speculative for traditional funding.

“Project X allowed us to go back to the site and eventually identify and isolate the bacterium,” Jaffe said.

The initial idea was to use what they discovered, Acidimicrobiaceae bacterium A6, in sewage treatment. Currently, most sewer 10 plants use bacteria to break down ammonia in waste, but doing so requires churning lots of air into the sludge to feed the bacteria oxygen. This process typically accounts for about half of a sewer plant’s energy bill, Jaffe said.

“The goal was to see if we could use the bacterium as a novel way to treat ammonium without the need for oxygen,” Jaffe said.

The research team has built a reactor and is working to refine the sewage treatment process. In the meantime, the researchers have uncovered a number of promising new uses for the bacterium. For one, the bacterium is very effective at remediating two common groundwater pollutants – trichloroethylene and tetrachloroethylene.

“These are probably the most common organic pollutants at superfund sites,” Jaffe said. The chemicals, once widely used in industry, are difficult to remove from the environment, “very recalcitrant,” as Jaffe said.

The researchers are now exploring the bacterium’s effectiveness at reducing pollutants that include ring hydrocarbons such as benzene, as well as heavy metals including copper and uranium.

“The original goal was focused on sewage treatment,” Jaffe said. “But the bacterium is really amazing. It has opened many new avenues of research.”